When I was a child, each meal was a battle from which I emerged the victor. I was a small yet unrelenting dictator at the family table. Beef stew and mashed potatoes? No thanks. I would eat only a beefsteak tomato, thinly sliced and covered in a visibly crystalline layer of salt, no matter how out of season or high in sodium.

My parents were usually too exhausted from their work days to put up much of a struggle. Instead, they kept tomatoes in regular supply.

My edicts were usually followed to the letter. Roasted chicken breast, no sauce. Cheese pizza, no pepperoni. Even kid-friendly foods were off limits. Processed cheese and hamburgers were steadily refused. At all times, there was to be apartheid on my plate: Turkey breast could not touch stuffing; ketchup had to be in a neat mound, safely clear from the foods that might be dipped into it. I shunned foods that intermingled too much or whose components I could not easily identify. Ethnic cuisine was out of the question.

Over the years, my way of eating became embedded in our family's rituals. My mother used to make meat lasagna with a small corner that contained only cheese and sauce. "My corner" had a toothpick in it, and everyone was reminded of my claim to it before portions were plated. Recipes that conformed to my dietary restrictions flourished in our family meal rotation. Anything containing mayonnaise or red meat was eradicated. My father still laments the loss of his steak-and-kidney pie.

My food horizons would not be broadened. If my parents snuck a meatball onto my plate of spaghetti, I would promptly remove it. Meatballs rolled so frequently off my plate and onto the linoleum floor that our orange tabby Whiskers developed a taste for them. My furry little accomplice would rush over and devour the meaty orb.

Dining at a friend's house was, naturally, problematic. At one friend's eighth birthday party, I sat at a picnic table staring down at an undesired hotdog. By the time her mom came around to scrutinize the remnants on our plates (an act I intuitively knew contravened hosting etiquette), I'd eaten the bun but the pale and soggy tube of meat still lay there, rejected, on my paper plate.

I knew there was going to be an issue when I saw her approaching. She informed me that I could not have any birthday cake until I'd "finished" my lunch. As far as I was concerned, it was finished. 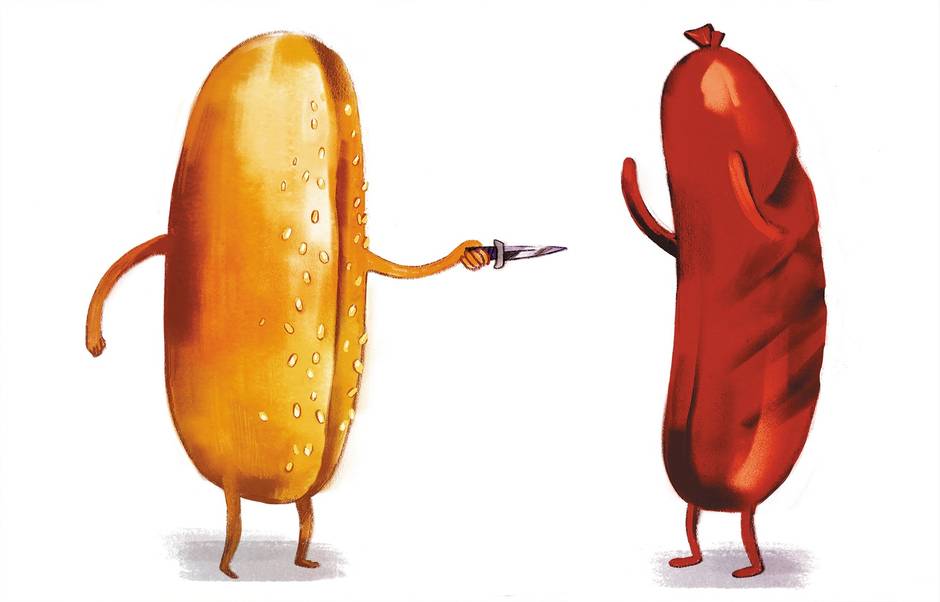 I knew I wouldn’t be able to reason with her, and I didn’t have enough time to prove to her that I meant business, so I did what one might expect – I waited until no one was looking, wrapped the wiener in a napkin, made an excuse to leave the table and buried it in a flowerbed on the other side of the house. My hands were conspicuously tinged with dirt as I delighted in a square of birthday cake.

The one – and only – time our next-door neighbour invited me over for dinner I declined the macaroni casserole being offered, and when asked what I wanted instead I confidently and earnestly answered, “candy.”

I’m not sure when exactly these compulsions came about or where they went. Their grip began to loosen after I went away to university. Now, after almost six years of marriage to an easy-going eater, I’m almost fully rehabilitated. Sashimi or calamari? No problem.

Thinking back to those childhood mealtimes, I realize I enjoyed the specialness of my personalized menu; the validation I felt from seeing my parents labouring to prepare a meal they knew I would eat and enjoy. I must have derived some pleasure from seeing my parents capitulate to my demands – I so rarely succeeded in my other campaigns.

I lost my crusade to be allowed to stay up and watch the Top Ten List on David Letterman. My parents were not the type to dote on me if I was feeling under the weather, and their common response to my claims of having a stomach ache or feeling sick (which were sometimes legitimate) was, “You’re going to school.”

Negotiations for an allowance increase often failed, too. And during the five-hour car rides to grandma’s house in our blue Chevrolet station wagon, I always had to sit on the raised part in the middle of the back seat no matter how hard I protested. Homework always had to be completed. Dentist appointments were not optional. My creativity in wardrobe choices was not indulged on picture day. My older brother got to stay out later than me. My little brother’s arrival shuffled my position in the pecking order.

There were so many battles I could never win, and so many choices I didn’t get to make. But the kitchen table was my battle ground, and I was a gladiator. I could assert my preferences – however capricious or arbitrary – and each dinner time my parents would round the corner waving their white flag in the form of a personalized corner of lasagna, or sliced tomatoes with salt. These special meals were for me, and I knew what they meant.