A dinky toy. Hundreds of tissues and plastic bags. A half mickey of scotch. A lighter. Firecrackers. Tea lights. A luggage wheel. A Cineplex gift card. A baby blanket. What do these disparate objects have in common?

No, they are not the stuff of an A&E Hoarders episode, but rather the detritus of life I have found – and picked up – during my daily walks.

I am blessed as an early retiree to be able to devote 90 minutes a day to my power walks through a beautiful 4.5-kilometre trail complete with river, forest, meadows and shrubbery. I share this paradise with birds, raccoons, beavers, snakes and assorted other wildlife; and, unfortunately, an endless supply of strewn garbage.

At first, when I noticed discarded food wrappers, coffee cups and pop cans along the paved path, I'd shout in my head: "Really?!" Who were these thoughtless litterbugs? Why didn't they use the recycling and litter bins that were abundant in the park? This garbage was more than an eyesore – it was an affront to my sense of right and wrong, and the plastics were a well-known danger to wildlife.

Furious. That was how I felt each time I bent to pick up a piece of someone else's rubbish.

But somewhere along the way, I had an unexplained attitude adjustment. I began to notice myself shifting to actually hunting these discarded and lost objects, scanning the terrain far and wide. Now, I get satisfaction from my "finds" and feel positively virtuous about doing a good deed for the environment, wildlife and my fellow park goers.

Each day is a junk journey, and I am the self-appointed waste warrior of my domain, sans armour, of course.

Nothing is too picayune or odd to catch my eagle eye and initiate my bend-and-pluck routine: a sliver of cellophane that once bound a straw to a juice box; bottle caps; an empty Viagra package; a metal stool tucked in the underbrush 40 paces off the path. I pick up 20 to 40 pieces of trash a day. Through rain or shine, snow or mud, I venture out each morning to fight the good fight for the environment and my little piece of paradise.

I've risked life and limb on many occasions to nab something near the water's edge or buried under thorny foliage. Picture a fiftysomething woman teetering on loose rocks in the river to nab a plastic bag caught on a twig. That kind of action ended badly with two old-fashioned "soakers," one in the middle of winter. I once slid down a muddy hill on my backside in pursuit of a styrofoam food container. I nearly poked an eye out on a branch while reaching into deep foliage for a chip bag. And I have often waded into the underbrush to retrieve a beer can or Gatorade bottle and come out decorated with burrs and thorn scratches. 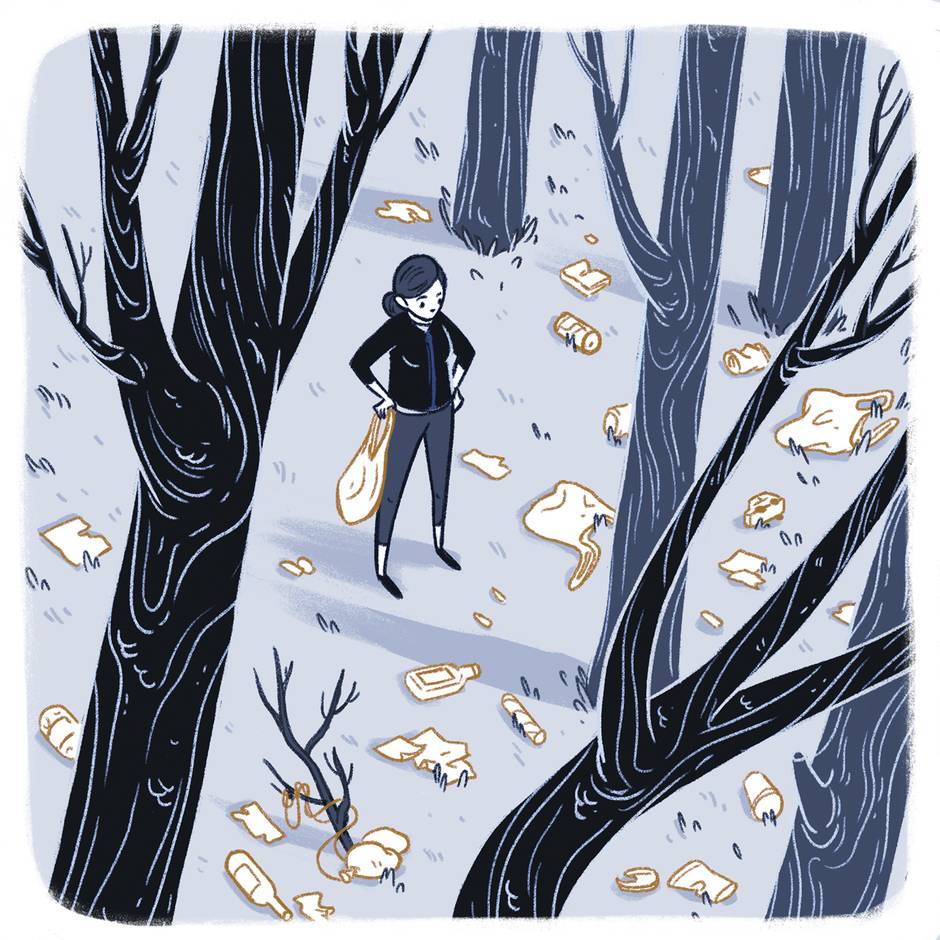 But I will not be deterred. Over time, I’ve developed what I call my rules of engagement:

1) Look around. When powering off the path to nab something I’ve spotted in the weeds, I inevitably spy additional bits of garbage, many clearly long-ago discards. I retrieve those too, no matter how grungy.

2) Safety first. Given my age and near-accidents, I’ve become more careful in assessing the risks of injury when contemplating dodgier refuse rescues.

3) Do no harm. When plunging into the trees or brush I must avoid breaking branches or stepping on the ever-present snails and worms.

4) The uber-icky limit. I won’t pick up cigarette butts or soiled or rain-soaked tissues.

What perplexes me is how some of these objects even get into the park, or how they end up in the odd locations in which I find them. Golf balls? No course nearby. A single winter boot? What happened to the other one? Full dog-poop bags in the underbrush? Who collects “doggy do” and then hides the full bag? I discovered a rainbow-coloured condom wrapper about 20 steps off the path in a very inhospitable bit of brush. I am all for love in the wild, but it was not an obvious spot for canoodling. One of the grossest finds was a dirty diaper on the bank of the river, below a bridge, which was steps away from a garbage can and within sight of a washroom.

My proudest moment, though, was the rescue of a bunch of colourful helium balloons caught on some branches at the water’s edge across the river. I made my way over the nearest bridge, shimmied down between a wire fence and a concrete abutment and along a path to a spot above the balloons. But it was much too steep an embankment. (See “safety first” in rules of engagement.) However, a few days later, I had a eureka moment. I walked far past the balloons until I could scamper down a shorter hill and made my way to almost within reach of the balloons, only to be thwarted by dense thorny brush. As luck would have it, it was winter and I was able to gingerly step, without sinking, onto a bit of melting ice, to free the balloons. Success!

Occasionally disheartened by my daily game of waste whack-a-mole, I ask myself: “Am I making a difference?”

I sure like to think so. But my fervent hope is that when I reach my expiry date, I will have earned a Nexus pass through the pearly gates for my efforts. That’s enough to keep me going. Carpe litter!