I fancy myself a hard-boiled urbanite, a woman who can navigate the Toronto subway system without a map, drive a car barely touching the brakes and get through life on my own steam.

I'm a skeptic with pushy tendencies and an aversion to authority. I always have to be told to sit back down until the plane comes to a complete stop and I never do. (What, is the plane going to take off again?) In other words, I'm hardly the knitting kind.

I started knitting for practical reasons: I wanted to quit smoking. I had learned to knit as a child from my Aunt Kitty, and picking it up again was like getting back on a bike. Knitting is a lot like yoga – even though it's results-oriented, it's a practice. The more you do it, the better you get. But even with years of experience, you can still make an epic mistake and not notice it for rows, which leaves you facing a gut-wrenching decision: "Should I rip out what I just spent an hour knitting or let the mistake slide and move on?"

What you decide will show you who you are.

As for the smoking, I quit a hundred times. Maybe a thousand. But every time I fell off the wagon, I kept knitting. I haven't had a cigarette in years, but I'm still a full-blown knitting addict.

Most knitters know what a basic Google search will tell you: that it was men who formed the first knitting trade guild, in the Middle Ages in Paris; that knitting in Canada was considered a sacred duty during two world wars; and that if you are ever in a really dark place in your life, you can knit your way out of it, though it may take you months and several kilometres of yarn.

So what brought me to a meeting of the Downtown Toronto Knitting Collective? Pure selfishness.

I was teaching myself how to knit socks from books and online tutorials, but there are times when you just have to be shown in person how to execute a "kitchener stitch." Where better to find a bit of free instruction than at a knitters' guild? 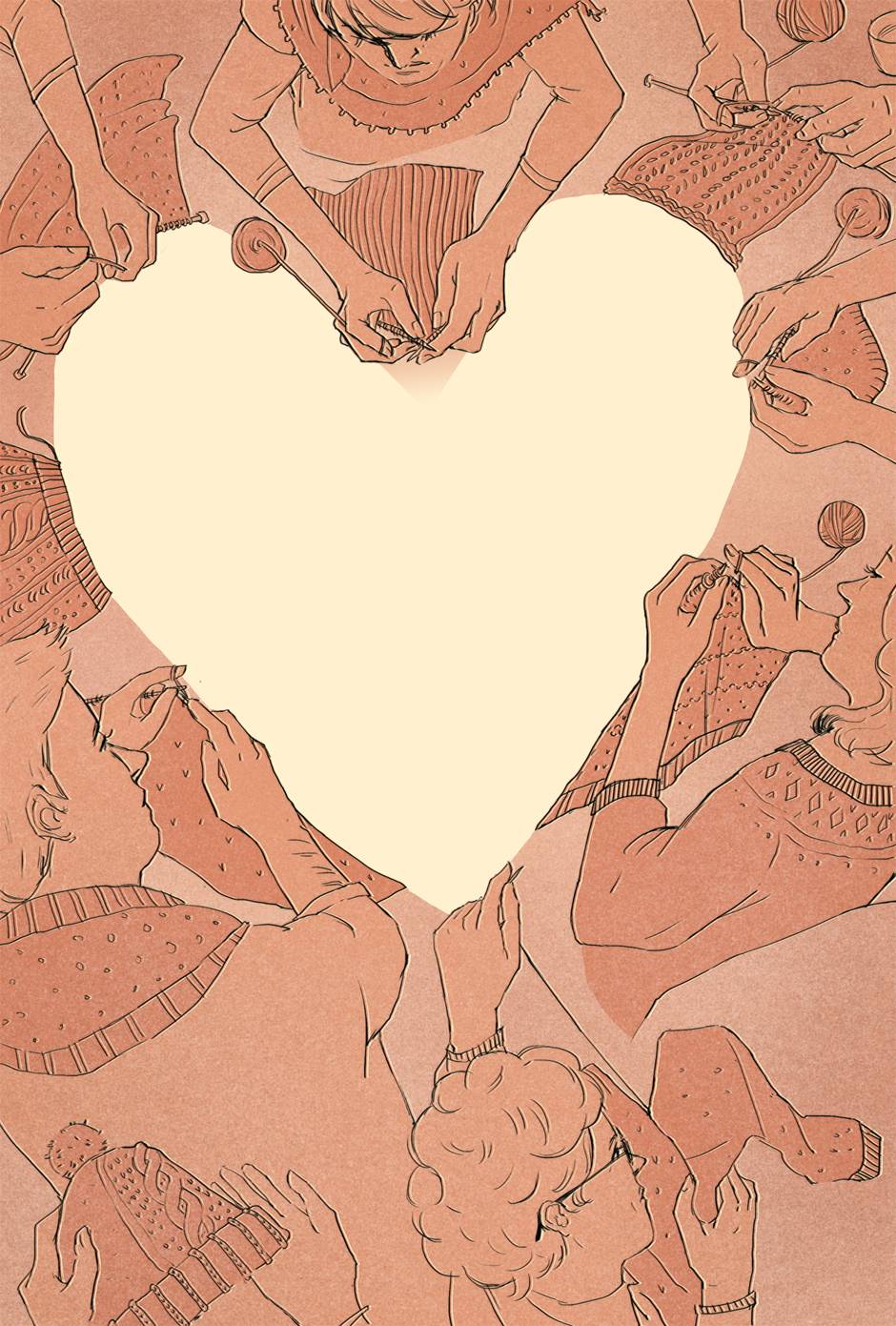 Taryn Gee for The Globe and Mail

I felt a jolt entering the meeting at the Knitting Collective and seeing a huge crowd of people. You may think you know the kind of person who knits her own socks or sweaters, but trust me, you don’t. Gender, race, religion and country of origin mean nothing in the knitting world.

I’d got to the meeting late, so I quickly grabbed a seat beside a guy who later told me he was an actor who knitted to pass audition-waiting time. Show and Tell was already in progress. A woman with a microphone called out a knitting category, “cardigans” or “lace” (yes, people still knit lace!), and knitters held up their projects for the room to view. I have to say, there are ordinary Canadians out there knitting things that boggle the mind. It felt as if a bunch of amateur nuclear physicists had convened to share with each other their latest attempts at a unified field theory on a single blackboard in a community-centre basement.

When it came to the baby-clothes category, a tall, serious-looking woman stood and held up a little white sweater the size of a Christmas-tree ornament.

I thought, yeah, there might be knitting geniuses here, but there are also people with way too much time on their hands.

The woman explained that the garment was for a premature baby.

Preemie babies can’t be that small, I said to myself. The sweater looked as if it was knitted with dental floss on toothpicks. The woman went on to say that it was for a premature baby who “wasn’t going home.”

Quick intake of air. Slight catch in throat. You could hear the knitting needles stop dead in their tracks. This sweater was made for a baby who would die. Did I hear that right? Yes, that’s what she’d said.

I suddenly felt ashamed. My face went hot and probably red. I stared at the tiny sweater, made by this woman’s hands.

“We make sweaters for mums and dads so they have something nice to put on their baby,” she continued. “Store-bought baby clothes don’t come small enough. They can leave the sweater on the baby or take the sweater home, it’s up to them.”

I don’t remember the rest of what she said. It is hard to look into the face of love and not be shaken, no matter how tough you are. A few years have passed, and I’m still moved by that teeny white sweater; that anonymous knitting done by a sensible woman to warm a baby too small to survive. For her, there would be none of the usual satisfaction a knitter feels – seeing a sweater worn, outgrown and passed on to the next lucky child. Why did she bother with one that would only be worn once?

I think she did it for the same reason knitters have always made things for homeless people, poor people, babies, kids, elders, soldiers, women with breast cancer, family and friends.

Could this be true, that every little thing actually does matter? Every stitch, every kiss, every kindness – they all count, they all add up? Maybe love is just a seemingly endless series of very small gestures repeated until you die.