You know those movies in which a teenage boy finds a mysterious, alien object?

The object seems benign at first, an exotic plaything, but as soon as he is out of his bedroom it comes to life, betraying its true malicious nature. I'm thinking of Gremlins, or Lord of the Rings, or the alien rock in the second Transformers atrocity.

Such an object has landed in my home. It's an iPad, and it has inserted its Bluetooth pincers into the nervous systems of my wife and me.

Not a dinner goes by when the iPad doesn't raise its black-framed head on our kitchen table and instruct us to gaze deeply into its ever-changing face.

We regularly watch videos of our baby on the iPad while the real baby – the flesh and blood version – goes unnoticed, slumped over helplessly in his Bumbo.

During a conversation the other day, my wife trailed off midsentence and turned to the bodiless god, our conversation helpless against its interactivity. And I didn't even get upset.

How has this object taken such control of two self-identifying anti-materialist luddites?

It turns out I've been a slave to the material all along.

The first object to take me heart and soul belonged to someone else: my older brother. I was 5 and unprepared for the powerful attractive force of his G.I. Joe action figure.

One afternoon, when my brother was at soccer practice, I stole into his room and played with Viper for more than an hour, the sleek grey helmet and machine gun working their way like heroin into the synapses of my brain.

When the hour was over and my brother was due home, I tossed Viper into the soot-catch of our fireplace. When he asked where his toy was, I was all halos and angel wings: "I don't know where you put your toy, but I'll help you find it."

After helping him search through his clothes and under his bed, I wandered over to the defunct fireplace, ready to "find" Viper and become my brother's hero. But when I looked into the soot-catch, there was nothing but blackness. Viper was gone. He had sunk into the ash, never to be seen again.

And then I realized that these things that so easily transport us into the exciting worlds of the imagination are just as easily lost.

It was a big moment for a little boy who had spent the previous hour locked in mortal combat with a plastic action figure. I had tasted the transformative power of the material object and would soon want another fix.

I remember my first mountain bike. Sheer black with 18 gears and big thick tires I could ride to Mars on. As corny as it sounds, I secretly called it "Stallion."

I paraded outside my best friend's house so he could see me on top of it, a master astride his horse.

When I got a new pair of Nikes, I ran down the street to the nearest park, staring down at the orange swoosh, impervious to the traffic swerving around me. In my mind I had become Michael Jordan, a demi-god in my new shoes.

Possessions have a way of making us feel grander than we are. I was bigger, faster, smarter, braver and more famous when I had something new. Like the best Hollywood special effects, possessions can fire up the imagination and recast us in more glorious roles.

So, in what role does the latest toy in my life cast me? None, really. The iPad has done nothing to alter my perception of myself.

The iPad does not make me feel that I am riding a mighty stallion, or am a sports demi-god or part of an elite unit of super soldiers saving the world.

Try as Apple might, the iPad does not have the powers of the toys of yore. It does not fire the imagination; it does not spark metamorphosis.

Yet as I write these words, I realize that I am skirting the truth. It isn't the iPad that lacks anything. The problem is me; I have changed.

I am no longer a kid who can be transformed by a pair of sneakers. I am an adult, husband, father and school teacher, and not even a magic wand can trick me into thinking I'm someone else.

I try to imagine myself Air Jordan-ing toward a basketball net, but even in my fantasy I miss the hoop by several feet and smack hard onto the asphalt. Gravity and reality are too strong these days. My childhood fantasies have all crumbled away.

It fills my every moment with gmails, second-hand cribs on Craigslist, and my automatic billing information.

It records every milestone of my son's life in HD.

It answers my every question and concern with a billion hits. The iPad provides virtually everything my wife and I desire.

The scary part, the part that really belongs in a fantasy movie, is that it knows everything about me and my family, and yet it has no concern for us.

While we are eating dinner, and the baby is fussing, the iPad rings and beeps and glows. And, as Gollum goes to his precious Ring, so do we slink from the table to retrieve it.

The iPad is all-powerful, and we are meek in its presence.

Facts & Arguments
My pledge to become a reformed hoarder
September 20, 2012 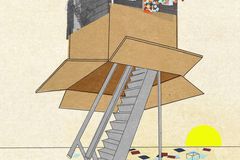 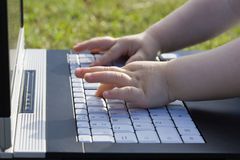