Skip to main content
Jane Crist
Contributed to The Globe and Mail
Published May 23, 2016

I have always found railway tracks romantic. The sight of a trailing caboose, the rumbling of multiple engines, the clickety-clack of passing cars carrying lumber, automobiles and even humans carried right across the country always summon up childhood memories of "my tracks."

In the 1950s and 60s, the CN main line that ran behind my family's cottage on Bala Park Island in Muskoka was my playground. My sister and I would scramble up the hill of sand and stones behind the cottage, breathing in eau de creosote, to lay pennies on the tracks for the trains to squash. And the tracks were our daily destination for hikes, picnics, fort-building and forays to other parts of the island.

A two-hole outhouse was the only buffer separating the fragile 19th-century cottage from the thundering trains that rocketed through the island at full speed, carrying loads from British Columbia to Toronto. (In that outhouse, I learned the facts of life, as laid out by my no-nonsense, no-euphemism aunt.)

Although we would play in the lake until our skin wrinkled, the sound of an approaching train would rip us from the water and we'd tear to the back of the cottage to count the freight cars or collect our pennies and admire the pressed shapes.

Our track excursions could be cruel. One day we were preparing for the annual pot-luck picnic on Blueberry Point, a five-kilometre trek down the CN line, when my grandmother, a prudish dictator, took one look at my clothes and declared them unfit for the occasion. She made me don coarse woollen old-lady pants that had belonged to my great grandmother – the worst possible choice for a kid knocking on puberty's door, especially one who was allergic to wool. As we dragged along the tracks at 85 pre-Celsius degrees, misery and blistered skin ruined the day for me.

Sometimes the tracks were a transit system. Our uncle walked three miles down the tracks to Torrance every Sunday. He had to cross three bridges with no safety net except the water below. When he finally hit pavement, he would hitchhike to his job in Toronto. He did this each summer weekend, with no mishap as far as we are aware. Sadly, it was a road trip that took his life shortly after retirement. 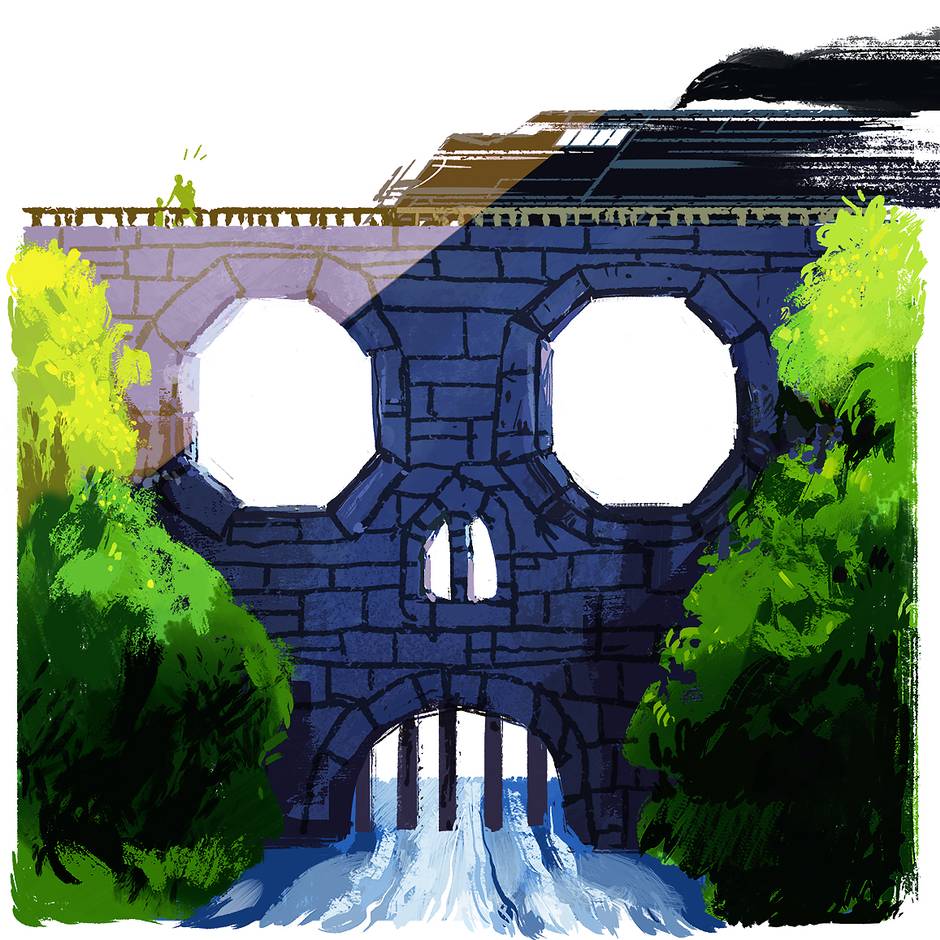 Speaking of bridges, one at the south end of the island brought me to my knees one hot day. I was 12 and bored, so I’d decided to take my two cousins on a hike down the track. They were 2 and 4. Muffy the 20-pound cat and Buffy the golden cocker spaniel accompanied us. No doubt I chitty chatted about the history of the island, pointing out a log cabin my dad and his buddy had built in the 1930s and the location of an abandoned train station. I kept the children entertained. It was a two-kilometre hike, and I naively gave no thought to the risks.

Halfway across the bridge that joins the island to the mainland there was a tiny crude outcropping, constructed for CN workers doing maintenance on the bridge. We were halfway to that safety point when I heard the 1:15 out of Toronto barrelling down the track. My father used to be able to put his ear to the track and determine how much time we had to flee before locomotive was upon us. I had no such gift, and was completely caught off guard when I saw the beacon of the massive engine rounding the corner toward us.

I decided I could stickhandle the kids, but the animals had to go. Without hesitation, I threw the cat, stalwart and silent, into the roiling waters below, followed immediately by the loudly yipping puppy. I grabbed a kid under each arm and did an ungainly dash toward that precious piece of real estate in the middle of the bridge. The train’s horn blared just before we hit the tiny bastion, and I pressed the children against me to await our fate. It felt like the train missed us by three centimetres, the screaming wheels covering my primal wail. The cars lumbered by, bouncing our tottery refuge. This was no dayliner, it was a 260-car python complete with historical caboose.

When it was finally gone, I peeled the kids off me and turned slowly to learn the fate of the pets. Dogs are natural swimmers; Buffy had swum to shore and was busy shaking off both the water and the traumatic indignity. Muffy, on the other hand, was in no mood to acknowledge us or the incident. She extricated herself from the water and pawed her way upward to the tracks, soaking fur moulded to her ratlike form. She spoke of this to no one. Buffy celebrated our reunion, tail wagging as he set off to the cottage with no sign of a well-deserved grudge.

We did eventually lose a beautiful young dog to the tracks, but Buffy’s and Muffy’s numbers were not up that day. Nor, apparently, were mine or the children’s. And as neither of my charges was of age to report the incident, it remained in the vault until I was in my 30s.

I still shudder when I contemplate the hostility of such a playground. These days, railways are heavily guarded against infiltrators and the folly of the young, though the stretch of track behind that cottage is still shockingly ungated. It is, however, very much respected by all, no longer a playground and still holds allure and memories.