Parked beside the sleek Air Canada jet, she looked like a toy. But my enthusiasm would not be curbed.

The tiny two-seat Cessna shone in the sun. And for one hour she was mine. Well, sort of. The bill was mine alone. Control and responsibility for my first flight lesson would be shared with my instructor, Glen.

I'd enrolled in ground school last winter, and by spring had morphed into a plane geek. I struck a deal with myself: 100 hours of ground school and online study would be rewarded in summer with one hour of shockingly expensive inflight instruction.

So, there I stood on the Kamloops tarmac.

Our pre-flight inspection indicated the bird should fly. To my untrained eye, the weather seemed fine. "Nice today," I offered.

Glen eyed the wind sock and scanned the skies. "Wind from 270 at 10 knots; cloud ceiling 6,500. … Should be okay in the valley, but we'll stay away from the mountains."

I made a mental note to review my meteorology.

After squeezing into the teeny cockpit, we buckled up. Uh oh – trouble already. My eyes were perfectly level with the instrument panel. I cursed my 5-foot-1-inch frame while Glen reached behind the seat and produced a pillow. Sliding it under my butt, I felt more like a grandma than ever. But at least I could see out the window.

The engines were run up and tested, the compass aligned, the GPS turned on and tuned in and radios readied. It was time to warn whoever was out there that we were coming. I keyed the mike.

I spelled out the Cessna's FBMZ registration – Foxtrot Bravo Mike Zulu – and requested an advisory. The tower responded immediately and my confidence surged. Current wind conditions and altimeter settings were given, and runway 26 suggested for departure.

Glen released the brakes and eased the throttle in. The engine purred hungrily, sucking up the extra fuel. The propeller spun into a blur and pulled us forward.

I turned the yoke left and right to no effect. We drifted onto the grass.

"Steer with your feet; use the rudder."

Fighting years of automobile-induced instincts, I released the yoke and manoeuvred with the rudder pedals at my feet. We weaved unsteadily to the hold short point on the runway.

Full power and a dose of flaps are needed for takeoff. I applied both and we sped down the runway. With one eye on the airspeed indicator and the other on the white centre line, I struggled to keep us straight, both of my feet working the pedals. At full throttle we hit the 55-knot sweet spot and I pulled back on the yoke, lifting the nose. The Cessna (and I) shuddered as the runway slipped away below.

We climbed steadily into the blue. Wisps of cottony clouds rose beside us. Stratocumulus? I'd have to check my notes. For now, however, whirring, purring FBMZ had my full attention.

My heart soared, but my arms soon tired from pulling back on the yoke. Glen seemed to read my mind. He reached down and rotated the trim wheel between us. The pressure vanished, and the Cessna stopped fighting me.

"It's like cruise control," he grinned. "Trim her right and she'll practically fly herself."

I released my death grip on the control column and was amazed at how responsive the plane was to even the smallest adjustments. I struggled to make sense of what the instrument panel was telling me. Our altimeter indicated 3,900 feet and our airspeed was steady at 90 knots. No turning or vertical speed was suggested, so this must be straight and level flight.

As I rotated the yoke to the right, the wings banked and we headed unsteadily northward. Dual controls allowed Glen to correct my mistakes and keep us safe.

My gaze kept drifting back to the instrument panel, and Glen caught it.

"Private pilot's license allows you to fly VFR. Remember what that stands for?"

"So, look where you're going. Your focus should be outside. Where are the clouds? Make sure you stay out of them. Which direction are the mountains?"

And the mantra I'd heard before was repeated: "Aviate, navigate, communicate." In other words, first fly the plane.

The wind was behind us now, pushing us back to the airport. We made the necessary radio call and began our descent. Keeping my eyes outside as instructed, I watched a pair of hawks riding the same thermals that were giving us a bit of bump and grind. They eyed us warily, unimpressed with our noisy intrusion into their world.

Glen handled the landing. After slowing to stalling speed, we floated above the runway. Our touchdown was smooth as silk.

After we'd parked, tied down and locked up the plane for the night, I made the first entry in my fancy new pilot logbook, bursting with pride.

Now it's time to hit the books again. Meteorology must be mastered if this old dog is going to learn new flying tricks.

I had my doubts about learning to fly at the age of 43, but after taking the first steps I know I can do it.

"Attitude plus power equals performance" is a phrase used to explain how an aircraft handles under different scenarios.

Perhaps the same can be said of life, and, regardless of our age or situation, how we choose to live it. 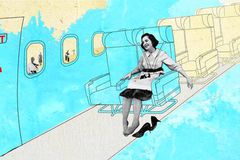 Facts & Arguments
We let our kids fly to Asia on their own. Here's what happened
September 19, 2012 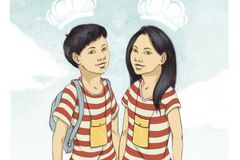