"You've got a cute little grandson there. Enjoy him."

This compliment, from a stubbly, unkempt stranger with a nicotine-stained voice, did not suffuse my heart with joy. The reason? He was referring to my infant son.

I am nobody's grandma.

"He's my son," I said, emphasizing the final word as if it was lit up on a marquee, which it was and always will be for me.

To the man's credit, he became immediately contrite, blaming his far-sightedness and the early hour. "I didn't get much sleep," he said, fake-yawning to substantiate the excuse.

But despite his apology, the elephant in the room stayed, sitting beside us at Starbucks until the man abruptly left, encouraging me to have a nice day.

I looked around to see if anyone had been listening, but none of the patrons appeared to notice my mortification. Little Guy burbled up at me, blissfully unaware of his mother's indignation.

I was 43 when my second son was born, 6 1/2 years after his brother arrived. This was by choice, in the sense that I really wanted to have him – and had tried for four years, undergoing three miscarriages and a mountain of worry in the process.

I was determined to provide my older son with a sibling, believing his life would be better with a constant companion. Ten years later, I still believe this – even when my sons threaten daily to "sack" each other.

Right before I delivered Little Guy, I experienced a jolt of shock when I heard nurses use the term "senior mom" while talking outside my hospital room.

I wondered who they were speaking about, picturing a fragile, white-haired lady down the hall destined for the Guinness Book of Records as the oldest woman on the planet to give birth. Then one of the nurses mentioned the room number and I realized they were discussing me! Newly 43, no spring chicken certainly, but far from cooked.

After the debacle with the stubbly man at the coffee shop, I examined myself in the mirror with a scrutiny usually reserved for cracked artifacts.

I made an appointment with my hairdresser, who had been imploring me to dye my grey for so long that he had turned grey in the interim. The results were subtle, but removed at least six months from my chronological age.

Next, I vowed to work on losing the weight I'd gained during both my pregnancies.

Eight months later and 55 pounds lighter, I felt strong, fleet-footed and quite certain that my grandma days were both behind me and far in the future – until I stopped for coffee again after a vigorous romp in the park with Little Guy, by then a toddler.

A young woman sitting nearby was charmed by him, and commenced a giggly game of peek-a-boo.

"He's so darn adorable," she said. I nodded proudly, patting down Little Guy's hair, which had stood at static attention when he pulled off his tuque. "Are you his mother?"

I waited to see if she was joking. When she didn't smile, I answered in the affirmative.

"Why do you ask?" I said, bristling like a surly porcupine.

"No reason. It's just you seem quite a bit older than your son."

The woman briskly put on her coat. I could tell she wanted to escape.

What was it with the patrons of Starbucks? Unlike the coffee, they apparently had no filters. Their comments left a residue of tactless acidity.

"Sorry if I offended you," she said, reaching for her purse. "But before you got pregnant, did you think about how old you'll be when he's 20?"

Before you opened your mouth, did you think about having your vocal cords tied? Your fallopian tubes too, for that matter. Rudeness like this need not be procreated.

Instead of speaking my mind, I managed to respond civilly, telling the woman that I thought energy and involvement, not age, had more to do with how I would be when Little Guy is 20.

She shrugged and left, wishing me good luck. I sat and stewed in my jaundiced juices.

I am extremely grateful for my kids. I try to keep myself in good physical shape for them, and I'm proud to report that I can still beat Little Guy, who is now a swift, lanky 10-year-old, in a foot race despite my biological or, some might muse, geological, age. Sure I'm tired, but that is the new default condition for most of us, isn't it?

I know that I am a smarter parent at 53 than I would have been at 30. I am richer in life experiences. My earned wisdom also makes me sensible enough to realize that my boys can't learn all they need through hearing about my mistakes: They need to discover their truths by living their lives, and my job is to love, nurture and be present for the inevitable falls that occur. I feel both old and young enough for this honourable task.

I didn't get to choose when I had my children, but I am glad they came when they did. What I do get to choose is who I sit next to at the coffee shop. I have learned to aim for a seat near the door. 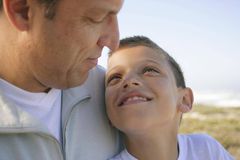 Outsiders on the toddler scene
April 13, 2009
Follow us on Twitter @globeandmail Opens in a new window
Report an error
Due to technical reasons, we have temporarily removed commenting from our articles. We hope to have this fixed soon. Thank you for your patience. If you are looking to give feedback on our new site, please send it along to feedback@globeandmail.com. If you want to write a letter to the editor, please forward to letters@globeandmail.com.
Comments