I never wanted to be a skater; it was my mother's dream. But I was blessed with the perfect body to be a figure skater – I was slim and small; I had firm, strong legs. And despite my initial hesitations, I grew to love the ice: the quest for perfection, the constant competition. I had many successful years on the ice, and when I made the Canadian Precision Skating Team in 1996, I was beyond thrilled. I was preparing to travel overseas to compete when life was suddenly rudely and cruelly interrupted.

I knew depression well. I had been diagnosed and treated at a very young age, and had silently suffered for years. But all of a sudden I had no connection to reality; I heard voices, I believed I was dying of varying illnesses, I thought I was being watched and followed, I believed I was a horrible person and that everybody was angry at me and I didn't know why. I wanted to end my life, not just for my own suffering, but because I was convinced I was a burden. In an instant, everything I was disappeared. I became a psych patient. I spent years in and out of psychiatric hospitals. I lost everything.

I was locked inside this body, this body that I had trained and weighed and trusted. I couldn't find myself and I couldn't see a way out of this.

Lonely days fell into more lonely days. Visitors were few and far between. The one I loved tried for a while but couldn't do it. He wrote me a letter saying he couldn't love me any more, it's just too hard. I grew weak with hopelessness. I grew weak with anxiety. I could barely make it down the hall to the front door of the hospital, so I stopped trying. My legs could no longer hold me.

The caretakers didn't know how to help, so they began to try me on different medications. The side effects were devastating and came on quick. There were times I was drooling, shuffling my feet, wetting the bed. There were seizures and involuntary movements. And there was hunger.

It was a hunger I had never experienced in my life. It felt as if I hadn't eaten in weeks and that I would die without food. And it was never enough. I would eat until I felt sick. I would eat anything I could get my hands on. I would search for food and then hide it in my hospital room. It consumed me. The pounds piled on quick – 20, 30, 50, 100. 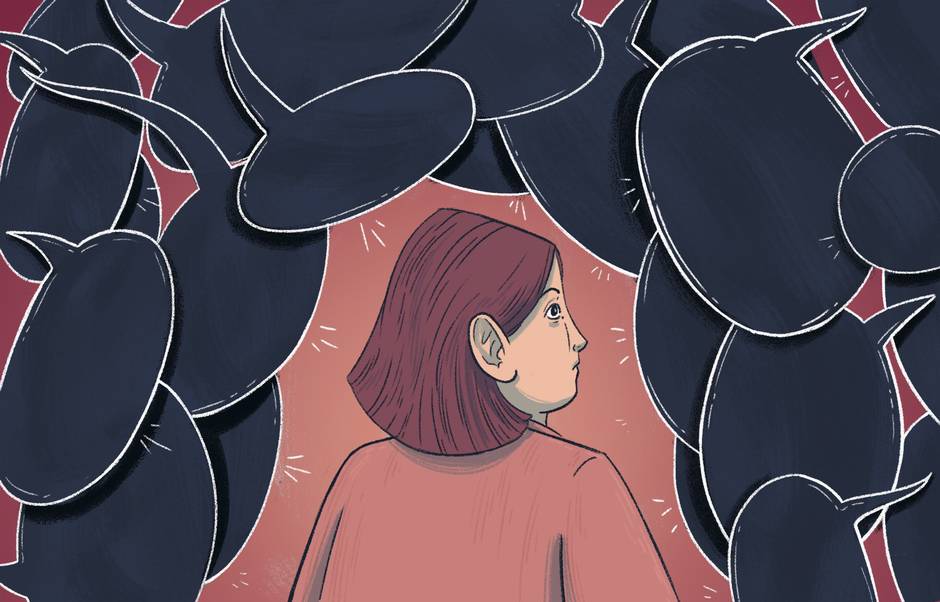 It wasn’t until I began to gain some mental clarity that I fully understood the impact of this hunger. My body had doubled in size. The medications were now working, I had my mind back, but I was left with the aftermath. A body that was foreign to me. I was told that it was a side effect I would just have to live with.

It became difficult to get around. Even walking became a challenge. I began to buy clothes in the plus-size store, and the options were few. People stopped holding the door for me. There were whispers and giggles when I walked into a room.

One afternoon while I was waiting for a bus a woman said to me, “How do you get that fat?” I looked to her friend for some support, but she just laughed.

I began to be called ma’am. One lunch hour while I was waiting in line for fish and chips, a man, a stranger, loudly remarked, “You don’t need fish and chips!” I’ve had people yell out of car windows, calling me fat and ugly. I decided that I might never be loved again.

But I resolved to move forward. When I left the hospital for the last time I knew I had a whole life to rebuild. After years of intrusive therapies and dozens of medications, I had shaky legs and few friends left. Yet in this haze something inside had whispered, “Write.” So, I began to write. Very quickly I could feel the words pulling me back to life. I grabbed on and I grabbed on tight. I called this hope.

Something inside me aches to live. Something pulls me out of bed every morning and into this world. Every day I work at life; I learn and I love, and I get angry, and I get sad. But this gift of hope that was given to me is a light, and this light has led me to joy, the kind that warms your toes and travels to your fingertips.

I still battle hunger. I feel hungry all the time. It’s a side effect of the medications that I have to stay on. These medications affect the functioning of my hypothalamus and pituitary gland; they cause hormonal changes and carbohydrate cravings, and they destroy your metabolism. This weight is extremely difficult to lose. Along the way food also became a comfort and a crutch. I have a very complicated relationship with food. I’m now working with a team of experts.

I listen to the fat shaming. Everywhere I go I hear it. This is how I got fat. I’m not lazy or uneducated or disposable. Perhaps we shouldn’t rush to judgment. Perhaps some kindness and support would be much more effective.