It’s not a murder of crows; more like attempted murder.

Two birds come screaming out of the sun, black talons flashing. One of them veers in from the left, distracting me, while the other attacks from behind, snatching a hank of blond hair and maybe a little of my scalp before flapping up to the safety of a tulip tree and showering me with a stream of corvid invective.

I skulk past as several more black birds mutter conspiratorially in the trees. One flies close, then perches on a fence and barks out commands like a drill sergeant. Others follow, taking up strategic positions to the front and side. Other people walk by untouched because it’s me they’re after. This is personal.

It started several years ago when a pair of nesting crows took up residence in a pine tree just outside our bedroom window. My wife and I soon learned that crows are not very considerate neighbours. They get up very early, and argue from morning until night. And they’ll attack anything they consider a threat to their nestlings. Eagles. Raccoons. Me. We tried to discourage them, waving them off or lobbing pine cones when the noise became intolerable.

Things came to a head one late spring evening when we were having supper on our roof deck. One minute we were sipping wine, the next we were being strafed in a coordinated attack.

As with everything else in Vancouver, it’s all about real estate. I wasn’t about to surrender the roof deck to mere birds, and grabbed the nearest thing to hand – a garden hose. I sprayed a wide arc of water and stared the crows down. They settled just out of range. I kept the hose handy for the rest of the evening, and they kept their distance. Score one for us, I thought smugly. That’ll teach ’em.

How wrong I was. Crows never forget a face. They nurse their grudges and hand them down to their descendants. When, a few days later, their eggs were snatched by a raccoon in a daytime raid, the pair grieved raucously and blamed me. They had my number, and there would be consequences. The raccoon got off scot-free, while I seemed to be on some kind of avian hit list. 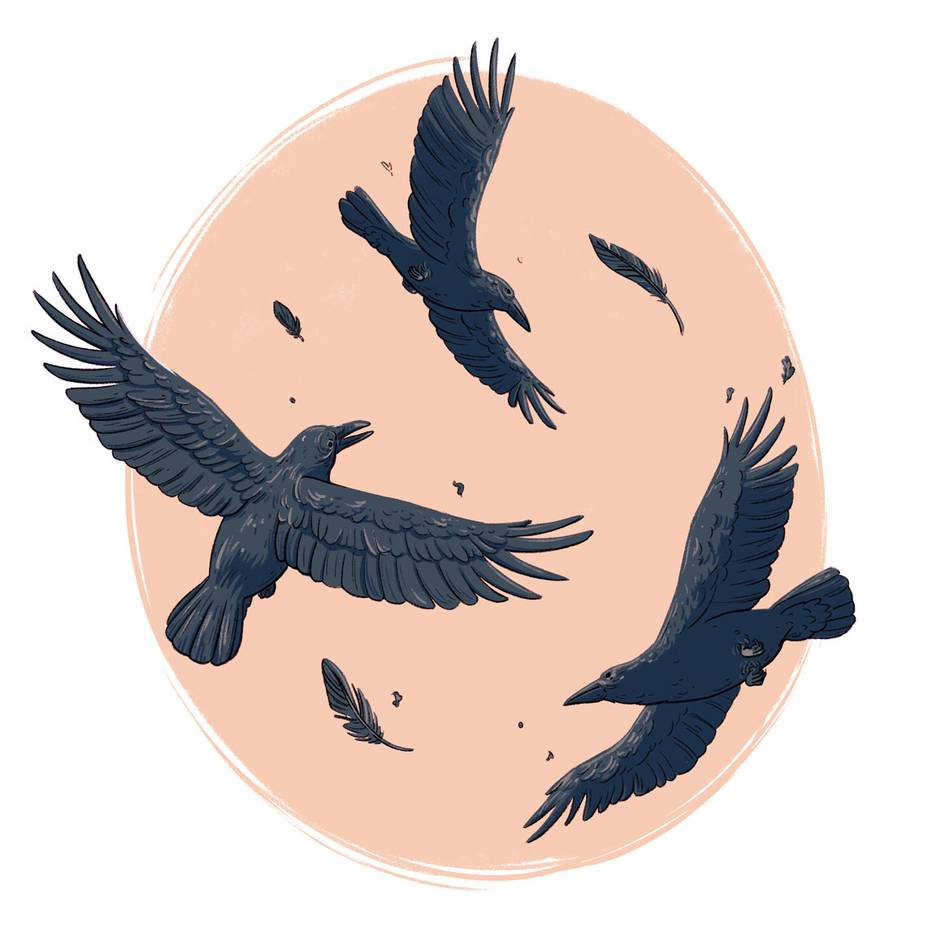 Most of the crows around here come from a massive roost about 10 kilometres east, near Still Creek in Burnaby. Thousands of them flock into the city every morning to scavenge for food, then head home en masse in the evening. Except when they’re nesting, between April and July. Young crow couples prefer to stay in town during the breeding season. The city has lots of big leafy trees with reusable empty nests, and abundant food.

This year, the original pair of crows (or their descendants) have moved into a nest in a large maple tree out front. It looks like they have two or maybe three nestlings, which means they will be around for another month until the nestlings learn to fly.

The fledglings’ acrobatics can be life-threatening, and a baby crow may be on the ground for a couple of days until it figures out how to fly. The parents seem to feel that the best way to help is to stand a safe distance away and keep up a steady, critical-sounding commentary – and, of course, dive-bomb anyone who comes near. Especially me.

Crows are the wise guys of the avian world. And if you don’t think they’re dangerous, just read the police log. Recently, at a Vancouver mall, a crow made off with a bloody knife – a piece of evidence from a serious crime. That particular crow already had form, including being under suspicion for stealing a keyboard button from a police-car computer.

Still, some people have adopted the crow as their talisman. They revere the black bird for its cleverness, ingenuity and tenacity. And crows are pretty smart. They use passing traffic to crack nuts and shellfish for them. As in Aesop’s fable The Crow and the Pitcher, they will drop stones into a vessel to raise the water level high enough to get a drink. A study for the University of Auckland in New Zealand concluded that some crows are as bright as a seven-year-old child.

Despite their attacks, we’ve developed a certain respect for our crows over the years. Their determined stoicism in the face of adversity is remarkable. Recently, an overnight storm dumped 30 millimetres of rain on Vancouver in a few hours. Eavestroughs were overflowing and small rivers ran down the streets. We thought for sure the poor fledglings would drown. But when we looked out of the streaming window the next morning, we could see a black shape hunkered down, glistening from the rain, with one wing stretched out like a golf umbrella to protect the blue-eyed babies from the deluge.

My head still hurts from the attack outside my house; it was a surprisingly heavy clout from a bird that doesn’t weigh much more than half a kilo. Now, I flinch at the flap of a wing. And there’s no real safety inside. As I sit in my reading chair, a black bird pointedly darts past the window, giving me the hairy eyeball, as if to say, “We know where you live.”

But the breeding season lasts only a few months. And at least our crows didn’t come after me with a knife.