The Essay is a daily personal piece submitted by readers

When I peeled off the thick, padded layers from last winter and found that the last layer was actually part of me, I realized it was time to throw myself back into a particular hell.

It wasn't the first time this year that I'd considered getting back into shape. In January, my uber-fit friend, after raving about his gruelling yoga and spinning regimen, asked: "So, are you going to get ridiculously fit this year?"

"Umm … ridiculously," I answered, brushing cookie crumbs from my lap.

In January, all goals seem exciting and doable. During the spring I made some half-hearted attempts, but now, in mid-summer, I still find myself spinning my wheels in a familiar muddy rut with no appreciable forward motion.

Why do I struggle so much to maintain a reasonable level of fitness? And whenever I manage to drop some weight, why do I keep plumping back up again like a Thanksgiving turkey? The simple answer is that I lack self-discipline. The truer answer involves my relationship with food.

To everyone who would tell me, with genuine confusion or a patronizing eye-roll, "Just don't eat so much," this is what I want you to know: It's not about hunger. Or at least, not the gastrointestinal kind. There are cravings that have nothing to do with physical satiety, and pangs that are extraneous from your stomach.

Food can become an uncomplicated way to subdue these internal voids. Ingesting anything, whether sweet or salty, doughy or crunchy, feeds all manifestations of voracity, physical and otherwise. I've used food as an emotional balm, a cleansing salve, a calming opiate, a celebratory perk, a down-in-the-dumps pick-me-up and a late-night companion. The problem's compounded by the fact I hate throwing food away. I was raised to clean my plate and couldn't leave the table until my dishware mirrored my reflection. So now, much of my calorie intake is remnants – uneaten scraps from my kids' plates, forgotten castoffs at the back of the fridge, gravy-drowned morsels at the bottom of the pot.

Since running was the only activity that's gotten me into decent shape and engaged my interest for more than a minute, it was time to lace up the sneakers.

But first, I had a brief discussion with my body, which had taken to behaving like a lazy, over-indulged, resentful teenager.

Me: I think it's time to start running again.

Body: I hate you (slams door).

And so, a few weeks ago, I embarked on my first serious run of the year, planning to start with a slow walk/run combo. While I intended to split the activities evenly, the walk-to-run ratio was sadly unbalanced. If walking was my entree, the running portion wasn't even a side dish. It was the limp parsley garnish that's shoved unceremoniously to the side of the plate.

Yet I persevered, panting with each stride, then cradling my cramp-ridden side as I walked and recovered. Meanwhile, the low morning sun cast an elongated shadow across my path – a longer, slimmer version of myself, hinting at a lean physique that, no matter how fast I ran, I could never quite catch up to.

The post-run evaluation was promising:

Me: Shall we do it again tomorrow?

Over all, I wasn't displeased with my first foray. I had asked my legs for five minutes of running, and they gave me 15. I'd asked my heart to be strong, and it didn't seize up like a rusted-out engine. I'd asked my knees to bear my weight … and well, they're still not speaking to me.

I sometimes question why I aspire to such a high level of fitness when it's tempting just to accept the chunky non-athlete I see in the mirror.

The list of reasons is long: I dislike feeling tired and lethargic, and gasping for air when climbing stairs; I'm disappointed when the cascade of a silky blouse is interrupted by the extrusion of my midsection; and when my daughter plunges her face into the depths of my belly mid-hug, I actually worry about her suffocating. But the most important reason is that there are so few things in life over which I have control. This one thing is completely in my hands. I may have little influence over deadlines and bills and bad-hair days, but getting up off the couch and out the door is in my power. And it would be a shame to surrender what little power I do have in my life, especially when it has the potential to fix so much.

Why running? From the first footfall eight years ago, it was like being back at school, learning the basics all over again – how to breathe, how to put one foot in front of the other, how to endure.

Along the way, I discovered the extent of my strength and fell in love with the slow, painful path to that elusive runner's high. Back when I was running most days and 5K was an achievable distance, that was when I felt happiest, fittest and most peaceful, the most comfortable I've ever been in my own skin. The most myself. Once you've tasted how it feels to live as the best version of yourself, you can no longer be happy merely existing.

So, no more excuses. Sign me up for another season. I'm going back to school. 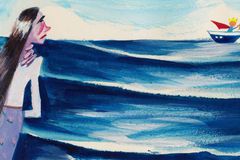 Facts & Arguments
My parents are still mad about our secret home birth
August 22, 2013 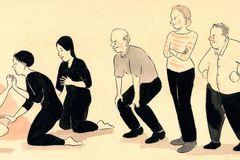