Piazza Venezia is not only the very heart of Rome, it is also the very centre of Italy. Literally, all roads in Italy do lead to Rome and are marked by their distance from the Campidoglio and the buzzing piazza beneath it.

The piazza isn’t as grand as Place de l’Étoile in Paris, but it may be more chaotic. Driving around it, over the slick, uneven cobblestones, is not for the faint of heart. No lanes, no rules, horns blaring.

Given the anarchy that defines driving in Italy – stop signs are mere suggestions, floating between lanes is the norm and passing on a blind curve while talking on the phone is commonplace – I was more than a little surprised to learn just how hard it is to get an Italian driver’s licence.

The theoretical test covers more than 4,000 rules, nearly every one of which is broken every day by every driver in Rome. Just like anarchy itself, driving in Italy is a deeply theoretical activity. If you are going to break rules, you must first know what they are.

It’s not enough to know you shouldn’t go down a one-way street just because it’s the shortest distance between two points. You also need to be aware of the exact number of kilograms allowed on each axle of a vehicle carrying merchandise but not people. You must also know the exact definition of the “road” and the “carriageway” and how long you should wait to drive after eating a heavy meal that might have included fried or fatty food.

In his classic study The Italians, Luigi Barzini claims that the jungle of Italian laws might be rooted in superstition: “Italians pass a complicated law, which is often difficult to apply properly, in the hope that it will work like an incantation and ward off that particular evil.”

If you add to this idea the fact that the Italian justice system is based upon the simple idea that La Legge non ammette l’ignoranza – The Law doesn’t admit ignorance – you begin to understand the need for more than 4,000 rules of the road. Every conceivable driving mishap has been named, and therefore perhaps magically robbed of its chance to occur.

In theory, at least, every Italian driver knows the laws. At the Autoscuola Mondial in the neighbourhood where I live in Rome, I studied for the theory test with a chatty group of 18-year-old Italians, all taking the test for the first time. 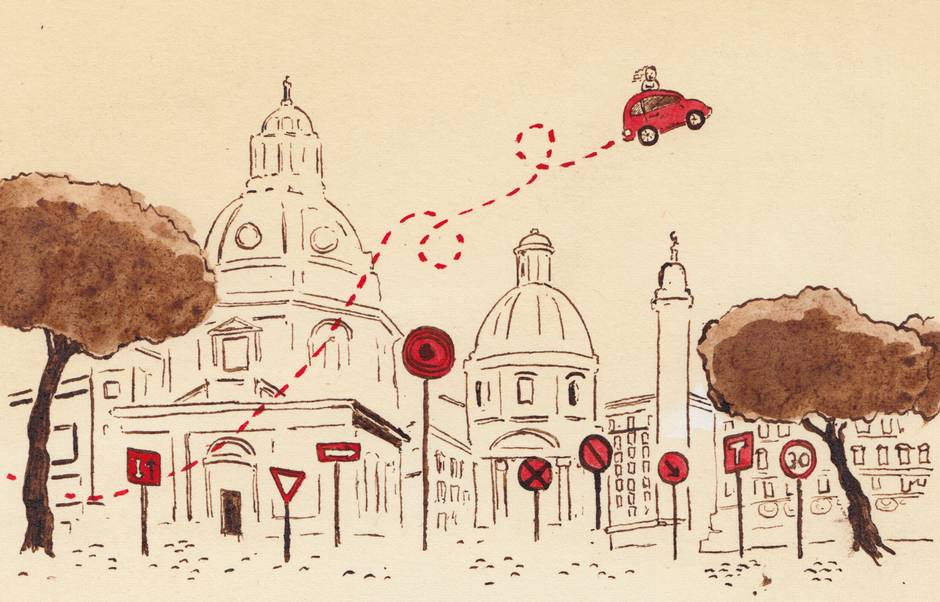 Emily Flake for The Globe And Mail

After driving in the United States for more decades than I care to relate, I felt decidedly out of place and somewhat ridiculous. My lifetime behind the wheel was worth nothing, as my instructor Marco explained: “Anyone can get in a car and make it go, but that doesn’t mean you know how to drive.”

In Italy, there is an ontological issue at stake; a driver is not just someone driving a car, like Yeats’s dancer and the dance. A driver is someone who has studied the detailed theory of skid rates and the angles of sight associated with every type of vehicle.

However, theory has very little to do with practice. In practice, there are very few “good” Italian drivers, if good means law-abiding. The law states that you cannot double-park, change lanes without signalling or tailgate. All three, and more, were broken immediately by Marco as three of us climbed into his tiny, double-parked Fiat on the day of the written test. As he darted off into traffic, switching lanes furiously, I reminded him from the back seat that the speed limit downtown is 50 kilometres an hour, and that the safety distance between cars should be at least 15 metres. He eyed me in the rearview mirror: “Yes, but if I follow so exactly the law, we will never arrive.”

In fact, given the traffic in Rome, it is impossible to follow the law. You would be a danger to yourself and others because no one expects you to. More than once during my practical lessons, Marco’s daughter, Laura, admonished me to speed up or drive backwards down a one-way street to claim a parking space. Once, while I was driving her to pay a bill at the post office (my practical lessons often involved running errands with Laura and Marco), I waited too long at a red light at an empty intersection. Laura threw up her hands and cried: “Vai [Go], or we will be here all day!”

After failing one of my practice tests because I couldn’t remember the speed limit for three-wheeled vehicles on secondary suburban roads, I lost patience and demanded to know why I needed to know this when no one ever drives the speed limit anyway. Marco smiled. “Because it is not about following the rules, it is about who pays if there is an accident.”

Suddenly it all became clear. Driving like an Italian means living like an Italian – that is, at ease with a certain amount of uncertainty. Now that I have my Italian driving licence, I can zig-zag my motorino through traffic because that is what’s called for in the situation. If there is an accident, surely the other driver will have broken at least one of the 4,000 rules as well. None of us is ever completely in the right. And no one is completely wrong, either. Italians seem to understand the ambivalence at the root of things, so they judge the situation at hand and do what works for them, knowing that there is, inevitably, an obscure law that may or may not be applied by an unforgiving state official or a cruel god. As long as no one is hurt, it’s better to discuss the whole thing over a cappuccino.