Margie Goldsmith
Contributed to The Globe and Mail
Published September 9, 2012 Updated May 8, 2018

I am walking slowly toward the CN Tower in Toronto to do the Edge Walk, a hands-free circumnavigation of an exterior ledge on Canada's highest building.

It's the scariest thing I've ever agreed to do, and I've tried some pretty heart-pounding stunts: I've rappelled upside down, jumped off high rocks into freezing water, paddled in huge white-water rapids, rock-climbed vertical walls and scuba-dived through underwater shipwrecks.

But even though I'll be in a harness attached by two industrial-size cables, the prospect of walking outside on a five-foot ledge with no railing makes everything else I've done seem lame.

I'm not afraid of heights, but I am terrified of looking down at the ground from the top of a skyscraper.

When I was in my teens, my father committed suicide by jumping from the window ledge of the 14th floor of an office building.

For years, I've conjured up an image of him out there alone. I'm hoping that if I can dare myself to walk around this ledge, I will finally be able to move past the event that has shaped so much of my life.

I began the day with a run on the waterfront, then headed to the Art Gallery of Ontario, hoping the Picasso exhibition would take my mind off the upcoming ordeal. It did, until I read the plaque next to The Acrobat, a painting based on Picasso's recurring childhood nightmare in which his arms and legs grew to an enormous size. Picasso said the dream scared him horribly. Back came my own terror.

As I approach the tower, I'm suddenly stopped by a policeman.

"Is it a suicide attempt?"

I feel a surge of relief, because if the tower's closed I'm excused from this trial. But no, the other entrance is open.

At the check-in, I sign my life away. Two 40-ish couples and an older man are standing nearby, and we make eye contact. "Are you in our group?" they ask. The older man, Bill, is father and father-in-law to the other four, who tell me they bought him the Edge Walk for his 85th birthday.

"I went hot-air ballooning for my 80th," Bill grins.

"Jump out of a plane with a parachute," he grins.

"Jump out of a plane without the parachute."

Laughing feels good. An elevator opens and people who have just finished the Edge Walk step out, all smiling.

Our group is led into the preparation room, where we remove jewellery, watches and everything in our pockets. We pass our Breathalyzer tests, then don orange jumpsuits and harnesses. Two guides fasten and check our harnesses at least three times.

Christian, our guide, gives our harnesses a final tug. "Ready?" He leads us to the elevator, which races 116 storeys in less than a minute. My heart is bursting through my harness straps.

At the top, two more guides clip us with metal loops to industrial-strength steel cables, one to our chests, one to our backs. Christian says: "Okay, single file, follow me."

Bill is in front, his cable smoothly sliding along the overhead pipe. Thank God I'm not first. We step on the metal ledge.

Smurf-blue Lake Ontario glistens below us. The skyscrapers, which looked like glittering behemoths from below, are tiny Legos. A helicopter flies by at eye level and we wave.

"It's time for Toes over Toronto," Christian says. He walks to the edge, steps over with half of one foot, then the other. Is he crazy?

He points to Bill's son-in-law at the other end of the line. "You first, Stephan." Stephan's stylish black dress shoes seem out of place, and he doesn't want to move them. Finally, he shuffles his feet an inch off the platform.

Now it's my turn. I count to three. I count again. Then I take baby steps to the edge. I know I'll be okay if I don't look down, but I need to see my feet. I plant one foot with two inches off the ledge, then the second. I stand there, frozen.

"Look down and enjoy the view," Christian says. Did my father look down? Or did he jump right away so he didn't see anything?

I step back quickly, both feet back on the ledge, but it's not over. Now, Christian wants us to take in the view. A matchbox-sized ferry moves across the lake. Kayaks look like toothpicks.

We move forward in single file, clutching our umbilical cord, the cable.

"I want you to turn around, face the tower, squat and walk backward until your feet are against the ledge," says Christian. "Then stand up, lean back and let go of the rope."

Perhaps it's because I'm facing the building and don't have to look down, but I can do this. I even smile and make the thumbs-up sign.

Next, we're to stand on tiptoes and look down. It's like being in a plane. A tiny train moves toward the station. I notice how many green parks the city has.

Maybe if my father had seen beauty, he wouldn't have jumped. But I doubt he thought to look, because he was depressed. He felt like a failure and wanted only to escape his demons.

As I look out at a puffy cloud, I suddenly feel the pain I have had since I was 18 stop.

I didn't climb on this ledge to end my life. I did it to understand my father. Now, it's not about him; it's about me. I am on a ledge, as he was, but I am not going toward death. I am embracing life.

And suddenly, I'm no longer scared to look down. I can't wipe the grin off my face. 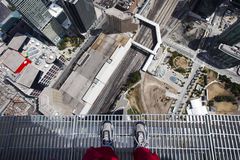 In pictures: walking on the edge of the CN Tower Gallery
April 29, 2018 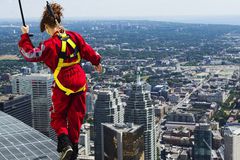