It felt like I had been there for days as I wandered around the airport in Kuwait, waiting impatiently for a 2 a.m. flight to Addis Ababa.

Ethiopia was on my list of "10 Countries I Want to See Before I Die." I was eager to learn about its rich and complicated history and striking people. I wanted to see the famous churches that had literally been carved into mountains, the deserts that looked like moonscapes. I didn't want to wait until retirement to explore my bucket list, or put it off and later regret it. So, at 35, I had decided to quit my job and travel.

Japan, Korea, Indonesia, Burma, the Philippines, Ethiopia, Yemen, Iran, Brazil, Antarctica. I had scratched the names down on the back of an envelope one morning – places that friends had described or I had seen in documentaries or places that just sounded interesting. I was going to take a year to visit them, to savour life now.

But after midnight, alone and exhausted in a foreign airport, I wasn't exactly savouring my experience. As I made my way to the boarding gate, all I could think of was sleep. I wasn't prepared for the crowd of women that was gathered there, hundreds of women, in elaborate headscarves of mustard yellow and dark burgundy and ocean blue. They did not seem to be travelling in a group, yet they were familiar with each other, talking and milling around. The excitement was palpable.

A handful of men were scattered among the noisy crowd, mostly lone travellers who seemed as weary as I was.

Curious, I found some fellow passengers who spoke English and asked why the flight seemed to be composed exclusively of women. I learned that they were Ethiopians who were domestic workers in Kuwait. They were able to return home to their families and children for just a few weeks a year. The women waiting for this flight were going home.

As I boarded, I was still thinking of sleep. The flight was five hours long and I knew that if I managed to nod off I'd be in better spirits in the morning. As the roar of voices filled the cabin, I knew I wasn't going to sleep.

It felt like somewhere between a bus filled with rowdy soccer players and a bustling bazaar redolent with spices and perfumes. Everyone was talking excitedly, some shouting to be heard. They caught up with their news and laughed – deep from the-bottom-of-their-gut laughs. They passed around photos and shared out the food they'd prepared for the trip.

Seated among them, I got to sample chick pea curry and lentil stew, the sour thin bread called njera. I was peppered with questions, too.

"Why are you travelling alone as a woman?"

"How cold is it in Canada?"

I was given advice on travelling in Ethiopia, told what local dishes I must try. It was an unexpected immersion in sisterhood.

And then, just as we were about to land, the women started ululating – and this is nearly impossible to describe if you have never heard it. It's a long, wavering, high-pitched cry of emotion and celebration. It was thunderous yet beautiful. I felt shivers on the back of my neck and my eyes welled up.

I began to absorb their excitement, their yearning, the depth with which they had missed their families and their homeland. It was a feeling of both pain and exquisite joy.

As we hit the runway, they exploded into cheers and then began to sing, in perfect unison and harmony, as if they were a professional choir, instead of mothers and sisters and aunts forced to work in an unfamiliar country to help support their families.

After we landed, I sat for a long time at the arrival gate, watching the reunions. Children leaping onto their mothers, as husbands and grandparents waited patiently for their turn. The women often just dropped their bags, but they did not run to their families. They walked slowly, as if they didn't quite believe the moment they had anticipated had arrived.

It was also a moment of realization for me. I felt humbled, and reflected on how lucky we are to be around the people that we love, to have the freedom to leave the country and to return. I had travelled over a good part of the world, but on this flight, I had realized once again that the journey is the destination.

Ethiopia was in the middle of my world tour, during which I made it to seven of the 10 countries on my list. In the end, I realized the moments that had changed me most profoundly were not the World Heritage Sites I visited or the perfect sunsets, but the moments I had with local people, the conversations and experiences that we shared.

As my plane finally landed at Toronto's Pearson airport, I was thinking of the Ethiopian women. Now, I cannot say that I ululated as we touched down, but I had a deepened sense of joy in returning home. And instead of making a list of other places I wanted to see on my next trip, I found myself counting up all the things for which I was grateful. And I promised myself, that to honour the women, I would appreciate each and every one. 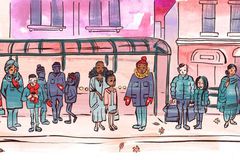 Israel reviews contraceptive use for Ethiopian immigrants
Follow us on Twitter @globeandmail Opens in a new window
Report an error
Due to technical reasons, we have temporarily removed commenting from our articles. We hope to have this fixed soon. Thank you for your patience. If you are looking to give feedback on our new site, please send it along to feedback@globeandmail.com. If you want to write a letter to the editor, please forward to letters@globeandmail.com.
Comments