I lay in an aching heap with a mouthful of peat moss and manure. “Who gave that man permission to dismount?” roared the riding master on my first day of riding and first time ever on the back of a horse (a very short time). It was April of 1956. I was 19 years old, had reached my childhood dream and been sworn in as a member of the Royal Canadian Mounted Police. Thus began my 40-plus-years odyssey of policing.

We were so young. Recruits were 18 to a maximum of 29 years. We signed a contract at an annual salary of about $2,300 that also required us to remain single for five years; there were no female recruits, of course, that would take another 18 years.

Training was of a different era. We rode horses a lot: Churchill’s quote “The outside of a horse is good for the inside of a man” was hurled at us often. Our instructors in drill and general policing were Second World War veterans and battle-hardened. Language was, to say the least, salted with barrack humour. They were tough but fair and quick to tell us that what they called us and how they provoked us would be nothing to what we would face in the “real” world. After six months in Ottawa we were transferred to Regina for three more months of training.

As “graduation” neared we began to think of where we would be posted (anywhere except our home province). Each 32-man troop had its “barrack room barrister.” Ours advised me to ask for Newfoundland since I wanted Alberta and would never get that posting. Sure enough, they sent me to Newfoundland.

In December, 1956, I left Regina at -40 F in boots, breeches and fur hat, travelled for six nights and seven days, and arrived in St. John’s to pouring rain and 40 F. The trip was by train, ship, and the “Newfie Bullet,” Newfoundland’s narrow gauge railway. Once, on the journey through the Gaff Topsails, the train unexpectedly stopped in the middle of nowhere. I asked the conductor what was going on and he told me they were buying rabbits. Apparently, hunters knew when the train was due and held up their brace of rabbits to be purchased by the cook and served later in the dining car. 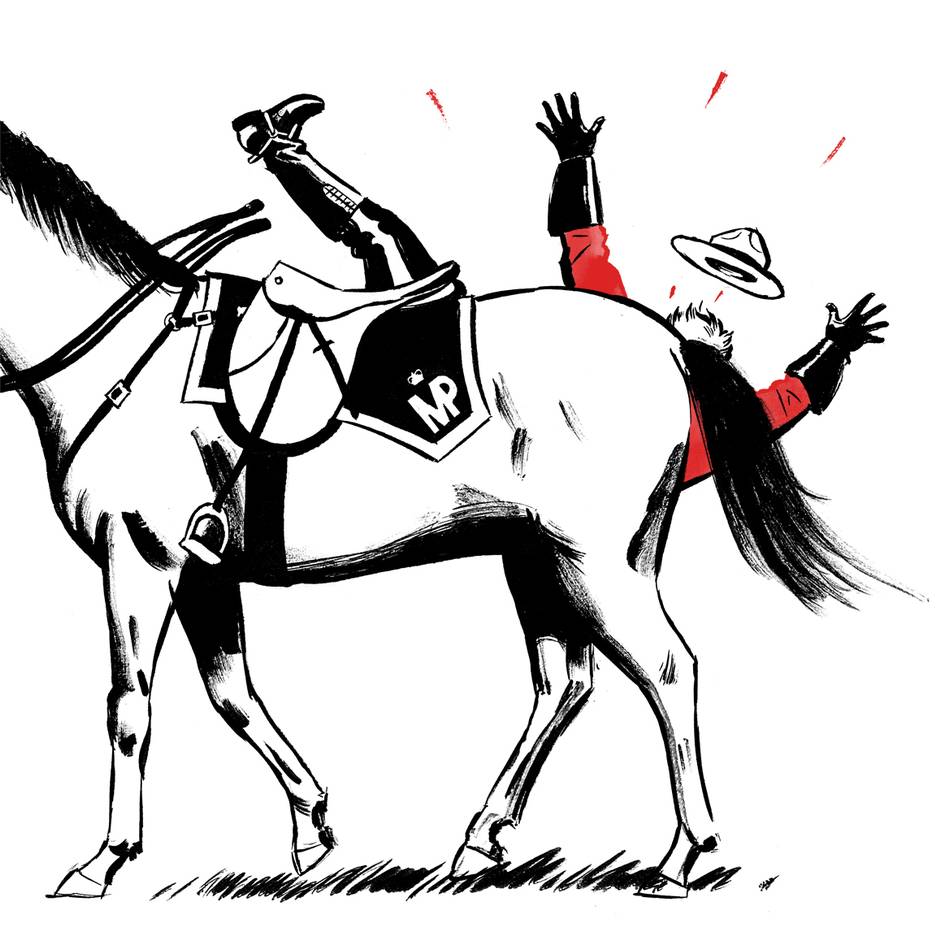 Jori Bolton for the Globe and Mail

After a week in St. John’s, I was transferred to St. Lawrence, a small community on the Burin Peninsula. Within an hour of being notified, I was on-board the Beaver aircraft heading for Grand Bank where we landed in a heavy swell on the ocean, well off from the wharf. I lifted my trunk out and stood with it balanced on the pontoon knowing that if I fell off (dressed in breeches, high boots, and spurs) I would go straight to the bottom. Soon a fisherman came out in a little dory and I was rowed ashore where the constable from St. Lawrence met me and we drove on.

At that time, St. Lawrence was an interesting small outport whose main source of income was fluorspar mining and fishing. It was also unique in that in the early 1940s three U.S. ships had foundered on the rocks of a nearby cove at night. The residents, at grave danger to themselves, had gone to the rescue of the crews, saving many lives. The Americans later built a hospital in St. Lawrence in gratitude.

Smuggling from the nearby French islands of St. Pierre and Miquelon was almost looked on as a sport and we were the entertainment. Most of the smuggling was pure alcohol, which came in large flat cans. When emptied, the cans were cut in half and used by the locals for baking bread. Smuggling was almost forced upon them as the nearest legal means of buying alcohol was in St. John’s, hours away over gravel roads. Later, some bright civil servant thought of putting a liquor store on the Burin Peninsula and the smuggling stopped … almost.

On a number of occasions when interviewing witnesses they would say they could not testify because they had seen the incident “through a window.” In the manner that we from “upalong” had, I discounted this as a Newfoundland “old wives’ tale.” Many, many years later, as the RCMP liaison officer in London, I was recounting this experience with a barrister friend. He told me that many years ago this was, in fact, true because the old windows were rippled and bubbly causing distortion to the point that such evidence was inadmissible. It was not until glass was perfect that the law was changed.

After the winter in St. Lawrence I returned to St. John’s. One day I was accompanying an older ex-Newfoundland Constabulary member when we went to a home hoping to find a young male. His mother came told us he had gone to Heart’s Content. I told her I was very sorry for her loss. She and my colleague looked at me oddly. I thought Heart’s Content was a euphemism for “dying.” I quickly learned that in Newfoundland there are also communities of Heart’s Desire and Little Heart’s Ease.

After 13 years on the island I was transferred back to the “mainland” to several postings in Canada and also two in Britain. While walking through Heathrow Airport escorting the commissioner to his plane, we talked about my return to Canada and upcoming retirement. He suggested I put off retirement and take over ceremonies branch, including the Musical Ride. I promptly accepted.

After 37-1/2 years of service, I returned to Ottawa, back to the stables where I had started. In the riding school I moaned to the riding master that I had not been on a horse since training. “Like riding a bike, sir, you never forget.” With that he unceremoniously took me by the seat of the pants and hoisted me into the saddle.

Well, here we go again, I said to myself.