My brother and I disagree about almost everything: politics, religion, the benefits of travel, self-help – I could go on.

As confirmed a pessimist as Oscar Wilde was, he finds my sunny optimism grating. In childhood, I could always count on him when others were bullying me, though perhaps only because he wanted me to be fair game solely for him. Let's just say we also argue about history – our own.

So who would have thought my arch-nemesis from birth would become my shining knight?

The past few months have been a bit tough. I broke my nose falling over my kids' bin of Valentines (love hurts), which led to vertigo and a slight concussion. The world has been spinning upside down while I attempt to stay upright as a single working mother. It seems that just when I think I'm settling into a predictable system, the universe upsets my apple cart.

Amid the chaos, there is one part of my home that is always comforting – my fireplace. It's soothing. It's beautiful. It's real. A mesmerizing fire can take the edge off, both physically and mentally. And it's a focal point of my living space – a floor-to-ceiling mantel decorated with fairy lights, candles, a pretty fire screen and brass tools. When I have guests over, I light a fire – it's an inevitable dessert-time destination.

One Friday night this spring, I was entertaining. I had placed the pinecones, set the kindling and lined up a log. My kids and I had been away, so the fireplace had been idle for a while. When I opened the damper, more debris than usual fell from the chimney.

"That's odd," I thought. Odder still was the bit of brick that fell next. Oddest yet was the thump that announced the landing of a squirrel amid the kindling.

It looked at me, I looked at it: the calm before the storm. Then it started acting all squirrelly and, well, I followed suit. Shrieking, I called for my kids, who freaked out even more than the squirrel, which had gone from 0 to 60 in a few seconds. When it tried to climb the screen, I grabbed a poker and threatened it back. "Oh no, buddy, you are not coming into my house! Not by the hair of my chinny-chin-chin!"

This kind of mania went on for some time in a "dances with squirrels" tango. Then, suddenly, up the chimney it went. Poof, like Santa. The calm after the storm, except my heart was now racing and I didn't know who to call. Mom, of course! Her octogenarian voice of reason reminded me about the Humane Society . Sadly, they don't come to save wild animals like me, but they gave me the number for pest control, who wanted $500 to come to the rescue. Seriously?

And then it happened again. I heard the thump. You see, the squirrel had gone up, but in my distraction I hadn't closed the damper.

This time the squirrel was at a disadvantage. I had my mother-bear suit on and was defending my territory. Towels blocked potential exit spaces around the screen, so there was no hope for escape into my home. And while I wouldn't want a dead squirrel in my house, better that than a live one, so the poker was ready at hand. While there was still considerable volume and movement, the tango this time was less frantic, and by the time the squirrel went back up the chimney I was ready to close that damper. Phew!

When my guests arrived, I told them why we wouldn't be having a fire, and there were all kinds of sympathetic and practical responses. In my optimism, I pictured the squirrel out in the world eating my birdseed. At the very least, the animal was being kept at bay by the damper – for now.

The next day, I was to attend a Mindfulness-Based Stress Reduction workshop. No, I am not joking. And, quite clearly, I needed to go. But how could I leave my kids alone with their babysitter, my 86-year-old mother, and a squirrel potentially within the walls? Freud would have a field day with this one.

My mother, who had been called again Friday night after pest control named their price, had consequently left a message for my brother telling him of my plight. When I broke my nose, there was no sympathy call. But my brother does possess a couple of heartstrings, and he can't stand cruelty to animals. The Saturday morning phone call went like this:

Brother: "I hear you've got a squirrel."

Brother: "I'll be right over."

While I was at class, learning how to stay calm, he was on my roof determining that there was, thank goodness, no nest. Then he was on his back inside my fireplace in swimming goggles and gardening gloves, cajoling the poor animal down with a hockey stick, capturing it with my son's butterfly net, placing it carefully in a box he had brought and releasing it in the woods.

He was gone before I got home. My kids and I lit a fire to celebrate. When I called to thank him, my effusiveness embarrassed him.

"Don't mention it," he answered.

I'm grateful to that little rodent for teaching me to appreciate and love my brother. We still won't agree about politics or religion, but I've seen a shining side of him, and that perspective might help me during the next holiday dinner. I won't get defensive and think he's criticizing my cooking when he cracks a joke about eating squirrel.

Editor's Note: An earlier version of this essay incorrectly described Oscar Wilde as a confirmed bachelor. In fact, he was married to Constance Lloyd. 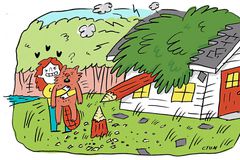 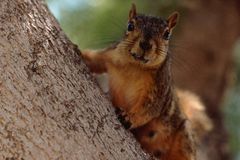