My career as a concert pianist was characterized by a certain lack of dignity. It began and ended one Saturday afternoon in a small church hall in Kamloops.

There, with close to two dozen of my fellow students, I nervously awaited my turn to demonstrate the musical achievement resulting from 10 months of piano lessons.

Apart from me and one other adult – a remarkably irritating high-school teacher who had recently told me he found time to practise every day – the aspiring pianists ranged in age from barely out of the cradle to just shy of puberty.

My own seven-year-old son – a source of both pride and annoyance because I knew perfectly well how little practice he needed to delight our teacher each week – was set to perform immediately after me near the end of the program.

The audience was typical for a concert of that nature, almost exclusively mothers, grannies, aunts and siblings of the scheduled performers. My wife, who had cancelled a cherished aerobics class to show support for her musically inclined husband and son, sat with us on one of the wooden benches that were just uncomfortable enough to ensure no one would be dozing off.

The few adult males present seemed restless, exuding an impression of being trapped, and consulting wristwatches with a frequency that struck me as rude.

Frequent consultation of my own watch told me that time was moving forward quickly that afternoon. Students followed one another in rapid succession, rising as their names were called, walking to the piano, standing shyly as they were introduced, then performing their selections. Each would then stand, bow to scattered applause, and head for the safety of a bench amid enthusiastic whoops and whistles from immediate family.

I do not know how many renditions of Twinkle, Twinkle Little Star were heard that day, but I do recall they were too many. I also remember my rising anxiety as the concert progressed.

At roughly the mid-point, the other adult's name was called. He strode up to the piano with a swagger that I am certain most in the audience found distasteful. Introducing him, the piano teacher made a little speech about how she was particularly proud of her adult students because they had to work much harder than would have been necessary if they'd benefited from lessons as youngsters.

She noted that Roger – yes, that was his name, Roger – had been taking lessons for nearly four years and would soon be sitting a Royal Conservatory exam. His playing was okay, I thought, but he bowed too smugly before swaggering back to his seat. He later insisted the glance he gave me should certainly not be characterized as a challenge.

Before turning to the painful description of my performance, it must be explained that my teacher had made it clear she did not share my musical preferences. I was a modernist; she was not. I admired discordant notes and Erik Satie. Duke Ellington was my musical idol, and I insisted that my practice assignments should reflect these tastes at least some of the time. A steady diet of gavottes and rondos was not for me. She had been less than enthused by my choice of concert piece, suggesting something "a little less challenging and much less avant-garde." But I was determined to demonstrate how significantly she underestimated my abilities.

Once seated at the piano, I noticed my pulse was racing. Nevertheless, I began to play with vigour and a degree of self-confidence. And the performance was absolutely splendid until, toward the end, my left hand stumbled badly. So badly that I had no choice but to stop playing.

Mine was not the first stumble of the day. At least three renditions of Twinkle, Twinkle had been restarted before their successful completion. Our instructions in such a circumstance were clear: Take a deep breath and begin again.

With a hopeful glance at the keyboard, I inhaled and launched into a second impeccable performance of the first three-quarters of my selection, before it all crashed again at precisely the same point. In my memory it sounded for some reason like dishes breaking.

I took another deep breath, but instead of making a third attempt, I slapped at the keys up and down the keyboard several times with open palms, creating more discordance than even I could appreciate, and a sense of shame that showed on my face even before I rose to face my audience.

I bowed and returned to my seat as quickly as I could. It took a surprisingly long time to get there. I saw that my teacher's jaw had dropped in amazement. She recovered quickly and introduced my son, whose performance went very well indeed (I am told). He showed no sign of being undermined by his father's embarrassing behaviour. (I really do not remember if his was one of that day's versions of Twinkle, Twinkle.)

After a quick glass of juice and a cookie following the concert, we left the hall. My wife was effusive in praise of our son's performance, and kind in avoiding comment on mine. (Well, a word or two might have been said.)

The piano teacher, too, was gentle in her admonishment and never scolded me directly for having the only temper tantrum of the day or setting a bad example for a roomful of children.

My musical preferences remained unchanged, but my piano lessons were soon over. Clearly, I should have had them as a child.

Facts & Arguments
I'm a first-year teacher who'll automatically be fired at the end of the school year
March 21, 2013 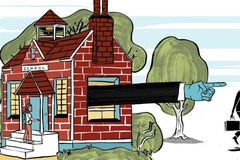 Facts & Arguments
What I learned rolling with the holy bowlers
February 21, 2013 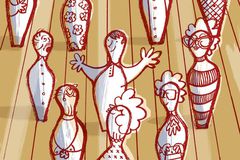 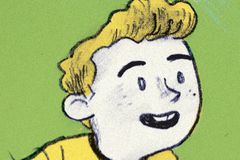