My elementary-school career as a student was a disaster. For the first month of kindergarten, one or more of my brothers and sisters (I had 11 siblings) had to drag me to school. It was only as an adult that I figured out why I was so reluctant to go.

During the spring I turned 5, my mother had been baking when the gas stove flared up and her hair caught on fire. She quickly smothered it with a towel, and except for losing some hair she emerged unscathed if shaken. I, however, was traumatized as I watched with horror. I think that is why I didn't want to go to school. It was only when I fell in love with a cute, dark-haired beauty in our class that I decided school was okay.

Despite my slow start, I soon mastered playing the sticks in kindergarten parades (oh, how I wanted to play the drum or blow a horn), and the authorities moved me on to Grade 1 and then Grade 2 with, I was told, some hesitation.

I thought I was doing just fine until one day all the Grade 2 students had to write a special test. I think it must have been an IQ test. Unfortunately for me, I had to go to the washroom shortly after it began. I energetically waved my hand, but the teacher in charge at first refused to see me, then told me I couldn't leave until I'd finished all the questions. Well, that was easy! I didn't bother to read the rest of the questions – I just wrote down any letter or number that would get me out of there and down to the washroom.

The result was that I was labelled as some kind of fool, or whatever the politically correct term was for someone who could totally blow an IQ test. I heard whispers that I had scored not only the lowest in the school, but probably the town of Paris in Brant County, maybe the whole of Ontario, or Canada or the universe. It bothered me a little, but at least I hadn't wet my pants in class. In retrospect, I should have wet my pants and aced their stupid test

Of course, with that on my record, the powers-that-be couldn't let me out of Grade 2. So I spent two years there with the lovely Miss Hough – my second crush!

The principal, whose name also happened to be John Fielding, hadn't reckoned with Mildred Fielding, my mother, whom they had somehow failed to inform that I was repeating Grade 2. After seeing my second Grade 2 report card, she marched me down to Paris Central School and into the principal's office. He didn't have a chance against the formidable mother of a dozen kids. That September, I skipped Grade 3 and went directly into Grade 4, though I was placed in the row of "crows," or maybe it was "groundhogs." I remained with "lesser talented kids" until I was in Grade 8, when I miraculously became a "robin." I never did become a cardinal or a bluebird.

That whole Grade 4 year, I lived in fear of Miss Inksater's lethal shoulder pinch, which reputedly could paralyze a kid for life. She never laid a finger on me, or even frightened me once – at least directly. Having watched her sneak up and dig her talons into the shoulders of other poor saps who had dared to talk to a neighbour, I managed to go all year without once turning my neck or talking to another student. Probably that was why I didn't have any friends in that class, or maybe it was because I'd spent two years in Grade 2 and they didn't know me?

It was this scary teacher, however, who did something totally unusual one day while teaching us about Canada's early explorers, and who made me think in a way that would determine my future.

She began the lesson by calling on the students to go to the window. I remember we all hesitated – no teacher had ever suggested such a radical act. It was always "go to your seat," "don't chew gum," "don't talk unless answering a question" and, of course, "never turn around in your desk" – remember the claws.

The windowsills were quite high, and Grade 4 students are quite short, so we stood on our tiptoes as we looked out across the street at the river that flows through Paris, Ont. She asked us what we saw and, feeling liberated from our desks, we called out in unison, "the Grand River."

"Now," she said, "try to imagine Father Marquette and Louis Jolliet with their native guides, paddling down the Grand as the first 'white people' to explore this land."

I stood, transfixed, and for a moment thought I actually saw them in birch bark canoes shooting through the swirling white waters of the mighty Grand. She had awoken my "historical imagination."

From that point on, I loved the study of history and gradually became a good student. There were a few setbacks, such as when my Grade 8 teacher, who was also the principal then, told me in front of the whole class that I shouldn't think of going to university because my family was too poor.

But I graduated fourth in my Grade 13 class, and went on to receive an honours degree in history from the University of Western Ontario. That led to 37 years teaching history, 22 at the secondary level and 15 at Queen's University's faculty of education, where I taught how to teach history – so that it wouldn't be boring and would engage students' "historical imagination." 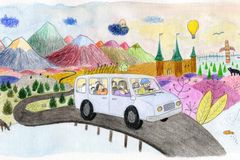 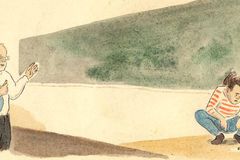