Our little family has endured – among the four of us and in no particular order – chicken pox, ringworm, whooping cough, postpartum depression, regular old depression, loss of a digit, loss of senses, cold sores, warts and intestinal parasites.

I won't mention the vomiting flu, or fevers and chills. We are a modern family; this is not the Dark Ages. We take medicine for these symptoms and carry on.

But it was an ailment from ancient history that almost brought us to our knees. Head lice.

When my six-year-old daughter got lice in her long blond hair, I truly struggled with the cure. It nearly broke me. I actually thought I might go mad. Perhaps I would have, except for the help I got from a certain carrot-chomping cartoon rabbit.

The first thing you have to do when your kids have head lice is launder everything. That meant all one million of my daughter's stuffed dogs and all two million of her stuffed cats had to be washed. Why do children need this many stuffed toys? I'll never understand.

Then I had to give her hair an evil-smelling chemical wash. But all the authorities on head lice agreed that that would not be enough. After the chemical treatment, I would have to wet-comb her hair every night for two to three weeks with a tiny little tool that pulls painfully at the hair roots.

I was to kill any eggs I found. They were described as tiny sesame-seed-sized specks that cling to the hair follicle.

"You dirty louse!" I would exclaim happily when I found one, much to my daughter's annoyance.

Now, if you haven't ever had children, I will tell you that wet-combing a little girl's hair every night without getting into a fist fight or a yelling match is no easy task. My sweet daughter actually turned around and slugged me a couple of times. I kept worrying that the neighbours would call Social Services on me.

I discovered that The Bugs Bunny and Tweetie Show ran for a solid hour every night after dinner. Maybe it would hold my daughter's attention while I picked the tiny egg sacs from her long lovely locks.

At 6 o'clock each evening, I would settle the two of us down in front of the boob tube with a bottle of conditioner, a spray water bottle, a plastic nit comb and a towel. My darling daughter would scowl at me as I began our nightly ritual. But as the hour progressed, she would slowly relax and allow me to tug away at her locks. We actually laughed in unison.

I don't suppose Rapunzel ever had head lice. And if she did, would the prince have wet-combed her hair nightly, most happily? Or would he have hacked it off with his sword, not having the patience for such vanity?

But I think dear old Bugs, if I had head lice, would just sing Oh Susannah! as he wet-combed my hair, then tuck a daisy behind my ear when he was done.

I was so grateful to him that I actually and truly fell in love with Bugs Bunny.

It was as if that wascally wabbit and I were soulmates. I mean, I like carrots. I really like carrots. And I, too, have an aversion to hasenpfeffer (rabbit stew). I am fond of singing in the shower, a shower that's really a waterfall, that is.

Even my daughter started asking for her carrots to be served with the green part still attached.

You may wonder where my husband was during all of this. He is a commercial fisherman and is away for weeks at a time. He was probably involved in a nightly poker tournament somewhere in the middle of the ocean, oblivious to our torment back at home.

My other child stayed clear of us, nose in a large, hardcover copy of Harry Potter and the Goblet of Fire in a far corner of the house.

I decided to Google Bugs's creator. I needed to know who was the cartoon character's heart and soul. After wading through a lot of confusing information, I found out that a whole group of men had helped create Bugs, including Charles M. Jones (a.k.a. Chuck Amuck), Bob Clampett, Robert McKimson and Tex Avery. Bugs's voice, with its thick New York accent, was Mel Blanc. But that didn't interest me. Chuck was the cutest, so I fixed my fantasy life on him.

In Chuck's black-and-white photo he looks like a thinker. He is handsome, always wearing a tie. He is fair, kind of a cross between Tim Robbins and Leonardo DiCaprio, but with the soul of Bugs Bunny.

I tell you, ladies, if Chuck hadn't been born in 1912 and sadly died in 2002, I would have tracked him down, or at least sent him a telegram.

I believe elderly people are fond of paper letters arriving in the mailbox, so maybe I would have written him. And this is what I'd have said:

"Thank you, Chuck, for helping us through head lice. 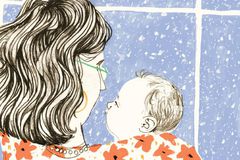 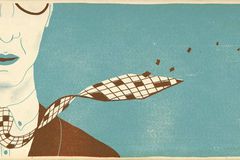