My family and I have watched the debates about active euthanasia since we moved from the Netherlands to Canada two years ago. It often strikes me that there is so little known about this highly sensitive subject, yet so many prejudices exist against it. With this personal story, I hope to contribute something positive in promoting the choice of assisted suicide.

Long before my father received the final judgment – that his cancer was incurable – he spoke with his family about the possibility of assisted suicide. He was absolutely sure he did not want to wait passively for death to come. When his family doctor indicated he was willing to assist in any way he could, my father felt a sense of peace.

However, peace was not yet possible, with the many doctor visits and examinations, and finding out the disappointing results of further scans, investigations and operations. What had looked at first like a small bruise on his calf had grown into an aggressive melanoma, spreading the cancer cells throughout his body, including to his organs and bones.

Since he suffered from rheumatism, my father had learned to suppress his response to pain. But this disease was in a different league. The pain was so severe, he could no longer ignore it or live with it. His quality of life changed rapidly: He had to say goodbye to all the things that had given his life a sense of meaning and pleasure. Instead of spending his weeks on tennis courts, in sailing boats or at bridge drives, he was bound to his chair. That hurt even more.

For me, it was hard to see his quality of life fading away. At 67, he had greatly enjoyed every little aspect of life, but all those joys had disappeared with a speed difficult to comprehend.

When the verdict "incurable" came, I immediately booked a flight to the Netherlands. I wanted to be with him. Though I realized there was a chance I would return to Canada without a father, my dad still seemed to be far from dying at that point. As soon as I arrived, we spoke about death – but as something that would take place in the distant future.

In all these conversations it came back to this one thing: that he did not want to sit and wait to die, letting the disease ravage his body and soul. If his life were to become too heavy to bear, he wanted to end it by himself.

Fortunately, he lived in a country that gives explicit consent to active euthanasia, though under very strict laws. It would become legitimate under three conditions: if the disease was deemed incurable, if the patient emphatically requested it and if two doctors individually gave their consent.

My father made his final decision after getting a second doctor's opinion. But even then, the doctor challenged the decision and asked my father whether this was really what he wanted and why.

Then, with the two signatures in his pocket, the only thing left to do was to determine on what day he wanted to die. In many of my last conversations with my father, we talked about that moment. When would he know his time had come?

The day came faster than we all imagined. When his organs showed signs of malfunction, it suddenly became clear to my father. He set the date of his death for two days later. And he knew exactly how he wanted to proceed: Surrounded by his wife and children, he wanted to drink to life – he with a glass of poison, the others with a glass of red wine.

Rationally, we all stood behind his decision because we knew his pain was unbearable and there was very little quality of life left for him. He had said goodbye to his beloved friends and now he wanted to say goodbye to life. The time was right.

Despite his determination, I had a knot in my stomach and felt nauseous as I drove to my parents' house. I asked myself repeatedly: "What on earth are we doing? Is this really the best thing to do?"

But the moment I stepped into my father's bedroom I knew it was the only thing to do. Everything had been said and done. I knew by the look in his eyes that he was ready. By taking that last drink instead of waiting for death to come and get him, he kept a last shred of dignity for himself.

It was a dignified and emotional ending. With full conviction, he lifted the glass of poison to say "cheers," and his humour didn't leave him even in those last few minutes. While my mother stirred some lemonade into his drink for flavour, he told her not to lick the spoon. We all laughed. He bravely drank the potion without hesitating for one second. Then he calmly lay down, and within seconds was fast asleep. After another couple of minutes his snoring ceased.

It was such a peaceful death for him. There were no nurses running around, no noisy machines or bleak hospital surroundings; just privacy with his closest family gathered around his familiar, cozy bed.

Even now, more than a year later, a feeling of tremendous pride comes over me when I think how he had the courage to end his own life. And though my heart is still filled with sorrow I smile, knowing he chose to leave the disease before it chose to take him. 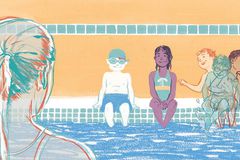 Facts & Arguments
How I learned to throw sheets over my furniture (just like mom)
July 29, 2013 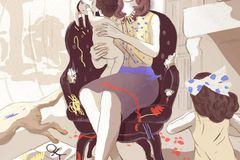