My name is RJ Skinner. I am a muscular 6-foot-2 (188 centimetres) with flowing brown hair and a chiselled jaw: literally tall, dark and handsome (I am aware of my conceit, but please keep reading).

I am a mildly successful actor, writer and professional wrestler. I have shared drinks, slams and screens with my childhood idols, and it's safe to say that I'm living all my dreams. I have always been fairly popular, intelligent and quick-witted and have lived a life free of complaint.

But there is one childhood demon that refuses to be exorcised: I am 25 years old and I can't ride a bike.

I wish the following paragraphs would chronicle years of parental neglect or some sort of rare neuromuscular disorder that prevented me from pedalling, but I have no one to blame but myself. It's not that I haven't tried. I just can't.

My childhood progressed like any other. Tricycles, training wheels – no problem. But the two-wheeled version proved troublesome. I would start moving just fine, but then, with the agility of a drunken trapeze artist, I would tilt, panic and put my feet down as the pedals continued rotating and slapped me in back of the legs.

It was no big deal at first. All my friends were learning, too. It's a rite of passage. But for me this particular rite never quite seemed to pass. And when my brother – three years younger than me – started riding with all the zest of Pee-wee Herman, I realized there was a problem.

My first instinct was to hide my failure so that my friends would never know. I became a damn good rollerblader and I had a believable set of excuses on hand in the event I was ever asked to go mountain biking. I even brainwashed myself into believing in the virtues of not riding a bike. Pumping the tires, greasing the chain, locking it up everywhere you went, it all seemed like a hassle to me. And who looks good in a helmet?

But there would be one quiet Sunday every summer when I would walk my bike over to the schoolyard in secrecy, hop on, tip over and hop off, my scratched calves a strong enough deterrent until next year.

My parents took it hard. Is there a bigger mark of a failed fatherhood than a son who cannot ride a bike? At least I could throw a baseball (horribly). After years of walking alongside me, holding the back of my seat, they took drastic measures. While we were on vacation in Lake Placid, N.Y., they sought out the services of a cycling sage whose job it was to teach people to ride bikes. After three mosquito-bitten hours in the woods, he began to question his career.

Once I entered high school, my Schwinn-less abilities were largely forgotten. High school was all about showing up late, looking bored and shuffling through the halls at an irritatingly casual pace. It was, literally, the anti-bike society. I was proud to be a non-biker, shunning the punctuality, shorts and cardiovascular health that came with it. I had one friend who wanted to be a bike courier. He was largely ostracized.

I did try once more in Grade 10 after confessing my secret to a girl in a last-ditch attempt to embark on a sexual Tour de France. After an hour of calf-scratched mockery and a short trip to second base, I pulled out of the race and never opened my mouth again.

The Lance Armstrong scandal reinforced my reluctance in adulthood: I'd had a bad feeling about him from the beginning. In fact I didn't push a pedal for the next 10 years.

I may have forgotten, but my mother never did. One hot, unsuspecting July afternoon, she couldn't take it any more. She grabbed me, gave me her bike and sent me to the schoolyard, telling me not to leave until I'd learned.

After a bit of scrupulous surveillance to make sure no one was in sight, I climbed aboard the beast – a women's bike that was three sizes too small. I launched into strategic warfare with my childhood and my decade-dormant equilibrium. Should I pedal first? Push and then pedal? Did I still have the training wheels in the garage?

After an hour and a half of scratched calves, internal tantrums and the threat of testicular atrophy from the female crossbar, I finally started to go. Five seconds at first, then I panicked and tipped over, but I turned around and started again. Ten seconds, 20 seconds and then a full minute without kissing pavement. I felt a rush of fresh new air in my lungs, a breath that was a little more complete. I am sure my cries of "Hey! Hey! Look at this!" drew more than a few neighbours to their windows to see an overgrown man's low-budget re-enactment of E.T. the Extra-Terrestrial.

Did this newfound skill start a renaissance of childlike wonder and being? Absolutely not. In fact, I still absolutely suck. I have difficulty steering, and mastering the brakes might take me another 25 years.

But I did learn one thing: Your successes don't define you, your failures do. Embrace your failures – they keep you going. If we only had successes we'd have nothing to live for. And if you can't quite crack the code, put it down, but never walk away, even if it takes you 10 years. It's just like riding a bike. 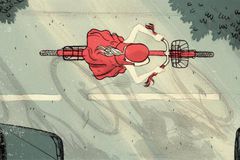 Facts & Arguments
Why there should be CSI Toronto: Bike Theft Unit
July 1, 2013 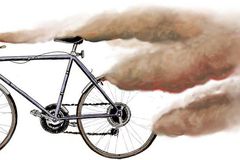 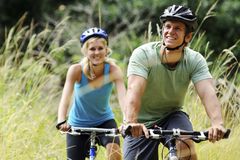