If someone offered you a glimpse into your future, would you look? What if that glimpse could reveal Alzheimer's disease or breast cancer? Would you still look?

For some people, ignorance may well be bliss. For others, knowledge is powerful. As for me, I'm not sure.

I've never met my biological father. Never even seen a photograph. Short of tracking him down and stalking him, I've had no way to decode my paternal family history. All my life my heredity has remained a mystery, one that I've been able to live with quite comfortably. Until recently, that is. Now, with a child of my own, that missing link is more important, more relevant than ever.

So here I am in downtown Toronto, sitting in a tasteful armchair, waiting along with women in their 40s wearing Lululemon and businessmen surgically attached to their iPads.

If it wasn't for the staff's white coats, I could be fooled into thinking this was an upscale spa. My palms have gone clammy. In a matter of minutes, I will find out what lurks in my not-so-distant future.

I'm at the offices of Medcan, a private clinic that offers personalized genetic testing. A few weeks ago I provided a rough sketch of my family tree – including missing branches – and then spat into a cup. (I know, so dignified.) My saliva was then whisked off to a lab and analyzed.

Now, a genetic counsellor named Jill is about to tell me my fate. There are no Tarot cards up her sleeve, just cutting-edge technology that allows her to look at my genes and sum up the 100-odd-page findings in a way that is digestible to someone whose forte wasn't high-school biology.

What Jill is looking for are one-letter variations in my DNA that serve as markers for conditions such as Type 2 diabetes, cancer and other diseases.

If genetic testing still sounds like the stuff of science fiction, it isn't. In fact, in time it will become more affordable, and therefore more mainstream. After all, forewarned is forearmed, right? If you could see the future, medically speaking, and change it, wouldn't you? Not so fast.

Just when I have visions of bolting for the door, back to the safety of the unknown, Jill greets me in the waiting room with a warm smile. No turning back now. I tell myself I will take the news – be it good, bad or downright ugly – graciously. Something will kill us all in the end.

The truth is, I don't know how I will react. As for Jill, she must be accustomed to her role as a kind of scientific Ghost of Christmas Future – and to the ambivalence of her clients, the simultaneously giddy and scared witless.

Rarely have I felt such conflicting emotions in a given moment. "Proactive," I say to myself. "I'm being proactive." I make it my mantra.

Skeptics of personal genetic testing worry about privacy. How will the medical community handle such sensitive information? Not to mention insurance companies.

Then there's the risk of complacency. According to Kenneth Kinzler, professor of oncology and co-director of the Ludwig Center at Johns Hopkins, a low score in a particular risk factor isn't a "free pass" guaranteeing you won't ever contract a given disease.

With calm professionalism, Jill flags conditions in which my lifetime risk is greater than 20 per cent above that of the general population. I'm not much of a gambler, but the odds speak for themselves.

When she tells me I'm twice as likely as the average North American to contract Alzheimer's disease, I hardly bat an eyelid.

But she saves the biggest bombshell for last. My maternal grandmother has macular degeneration, a condition that causes loss of vision due to retina damage. A condition I had always attributed to my grandmother's 50-year career as a smoker.

While the average person carries a 3.1 per cent risk of macular degeneration, my risk is a whopping 61 per cent, Jill reveals. Immediately, the bottom of my stomach drops out.

So much for stoicism. I had no inkling that my grandmother's condition was so heavily rooted in heredity. I've been thinking the testing would reveal some great mystery about my father, when in fact it revealed more about my mother's side of the family.

I take a deep breath and look for the silver lining. Luckily, it isn't hard to see. The results need not be a self-fulfilling prophecy. I'm still reasonably young, and the onset is typically after the age of 60.

We all know we should eat healthily and exercise regularly, yet few of us have a concrete reason for doing so. The threat of disease has an uncanny way of making you sit up and take stock.

In the elevator to the lobby, I hatch a plan. I have no regrets about coming here. Thirty years on, I can finally lay my father to rest. I can look forward, instead of backward. I can pick up the phone and book the eye exam I've been putting off. Then I can march over to the drugstore and buy enough supplements for my mother and me.

Some things, after all, are best not left to chance. 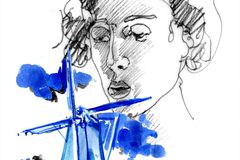 Facts & Arguments
I'm a doctor, but my father's heart surgery still filled me with doubts
July 15, 2012 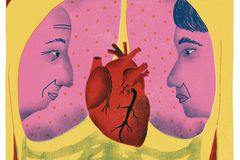