The 1965 Dodge Dart belied its name, keeping the speed limit along the highway from Toronto to the border with the United States at Lewiston, N.Y.

Three children inside obediently held their breath. Their greatest act of loyalty to their native country was, at their mother's invitation, to "take one last breath of fresh Canadian air" before crossing the border. Young lungs inhaled deeply and then erupted in mock sputtering as they left Canada and entered the United States.

Yet these young lungs – my brothers' and mine – loved where they lived in the States and had no real experience of being Canadian. Perhaps you become a citizen of the country of ambivalence when your roots are in one place but everything you hold dear is elsewhere.

My family is Canadian in the mocked old WASP way. We are United Empire Loyalists. Our ancestors fought (and lost) for the British during the American War of Independence, and these original refugees to Canada discovered the bitterness of the vanquished. For generations, this family lived with a suspicion of revolutionary ideals and with more than a little anti-Americanism – true Canadian Toryism cultivated by ancient grievances of expropriated property and being tarred and feathered in the name of life, liberty and the pursuit of happiness.

The family's loyalty was repaid and its vast, fertile New York State property was replaced with 200 acres of ice in a country of unimaginable cold. More imaginable is what was muttered under the breath in late January in the 1790s in this part of the world. The caustic muttering carried down through hundreds of winters to the point where my mother, even though we were living in the Hated States at the time, made sure that my brothers and I were born in Canada. I hope the Crown took note.

The enemy welcomed her with touching sincerity. She and my father made friendships that later would survive more than 40 years of absence. They bought houses in idyllic neighbourhoods in and around Corning then Rochester, N.Y., neighbourhoods with much baby-boom spillover and huge yards with no fences between them. My mother's tentative request to borrow a cup of sugar from next door and next door's happiness to oblige was telling – a bond formed in the pursuit of the comfortable domesticity of baking an (American) apple pie.

But there were shadows. I sat as a six-year-old in my family's suburban home watching race riots televised live from downtown. I heard new neighbours welcoming us and congratulating my parents for not being "the wrong kind of people." And I watched my father, a veteran of the Italian and Dutch campaigns of the Second World War, uncomfortably debating the U.S. presence in Vietnam with friends and co-workers.

Children playing in a backyard sandbox can scarcely understand that the blood running in downtown streets and in a far-off land will wash them away from what is known and loved to a country in which they were born but not made.

Vietnam brought us back to Canada. My oldest brother was approaching draft age and my parents refused to stay and risk his being shredded in a war they opposed. Our return found our home and native land populated by reserved and distant classmates; it found backyards carefully fenced off; it found neighbours who would lend a cup of sugar but whose forced smiles told that this wasn't done here.

We had returned to a place where no one carried guns but where faces hid daggers. Our friends and neighbours in the United States, for all their patriotism, had been warmer to us as outsiders than our own people. There was no walking in the back door without knocking here. My discovery of the country of my birth found it polite – that insipid Canadian self-image – but not nice.

These years later, many days I still feel like a stranger in my own country – a country where both sides of my family have lived for more than 200 years. Only recently have I come to understand that this is because my first 10 years of life on the other side of the border made me more an American than a Canadian.

I can still sing America the Beautiful and I can remember our Southern neighbour from across the street weeping that it "couldn't have happened in Texas" on that leaden November day when JFK was assassinated. Walter Cronkite is still the standard for TV journalistic excellence.

And for all that, I recall my 10-year-old self feeling bewildered when my American chums upbraided me for opposing the war in Vietnam or for asking my parents if, as a Canadian, I should recite the Pledge of Allegiance every day at school. With due deference to Expo 67, Canada had no similar emotionally loaded events to sear a young mind.

The morning after another Kennedy, Robert, was shot, my father sat watching the news, shaking his head, tears in his eyes. We had been back in Canada for a little while by that time, and he had made a huge career sacrifice in returning to a branch-plant economy suffused with a colonial mentality.

However, right then, it seemed he knew that he and my mother had not made a mistake. They hadn't. But for me, it meant the map of my identity would thereafter show a border right through the middle.

O Canada, you are my native land, but America – I think you are my home. 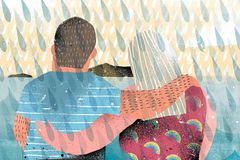