I had just left a west-end Ottawa veterinary clinic, where the family's pet gerbil – beyond its life expectancy and suffering from some final, tormenting illness – was gently put to rest.

While driving back downtown, I heard on the radio that an elk had been spotted on a bit of urban scrub land next to the City Centre, an office building two kilometres from Parliament Hill.

I was about to witness the second animal death of my day. And while the dispatching of the elk a few hours later would be characterized by police as a "humane" killing of a creature that posed a "severe" risk to public safety, few of those who saw the huge, healthy beast in its final hours would have described the outcome as anything but tragic. And a far cry from the euthanazing of our dying little rodent.

I have a camera full of animal pictures from weekend hikes in Gatineau Park and evening strolls in the heart of Ottawa: frogs and fuzzy caterpillars, blue herons and butterflies, groundhogs and squirrels. But a wild elk wandering in the metaphorical shadow of the Peace Tower? You'd have to dial the clock back more than 100 years for the last time that happened.

It was the result of the recent reintroduction of elk to a thickly forested part of Eastern Ontario. Nevertheless, the return of the species to old Bytown represented a magical moment in the natural history of the political centre of the country.

When a beaver was spotted a few years ago, dragging its tail across Wellington Street near the Supreme Court of Canada, the story drew national attention because of the animal's special association with Canadian history.

The elk is not a national emblem. But anyone who watched the 350-kilogram buck during those precious hours before it was shot dead – with its massive and muscly torso, huge antlers and air of supreme self-assurance – would have recognized the beast as a sterling symbol of a long-vanished country, the wild one that existed before Canada built its capital here in the 1860s.

In 1859, one of the area's early naturalists, Edward Van Cortlandt, published a list of the animals whose presence had been recorded. His "enumeration of the principal mammals, birds, reptiles and fishes of the Ottawa Valley" counted Cervus canadensis, or "wapiti," as he identified the elk, as a "scarce" resident of the region, but a resident nonetheless.

Within 20 years, however, that species – a huge member of the deer family known as the "Eastern elk" – was declared extinct throughout North America, the last known individual having been shot in Pennsylvania in 1877.

In Ontario, another subspecies, Cervus elaphus manitobensis, was also wiped out by the end of the 1800s.

The ill-fated elk that wandered into Ottawa must have been a recent import from Alberta, one of hundreds of manitobensis types transplanted to Ontario over the past decade from Elk Island National Park.

The reintroduction program is deemed highly successful – at least for the humans inhabiting the region, who are sometimes treated to sightings of the majestic mammal, and even hunting opportunities where numbers warrant.

But this week's encounter between the lone male elk and an Ottawa Police tactical squad made clear the limits of urban society's tolerance of wild animals. Even though this buck had, remarkably, discovered one of the few tiny pockets of undeveloped land in downtown Ottawa (a property slated, as it happens, for an office-condo project), the risk that it might suddenly "bolt," as police explained, meant the public-safety imperative left almost no latitude to let the elk live.

"Public safety is paramount," said the unfortunate officer appointed to address distraught onlookers and media at the sad conclusion of the affair. "The animal was showing increased signs of aggression," the officer insisted, and "subject matter experts made it clear that if that elk bolted, which it had the potential to do, it would be a severe public safety issue for folks in the community."

So, he added, "with deep regret – and it was very unfortunate – the decision was made to destroy the animal as humanely as possible."

While the authorities are generally being judged as unconvincing in such explanations – there is some evidence that jurisdictional conflicts, inadequate training or an overzealous concern for public inconvenience also played a part – their calculation is fairly obvious.

Any attempt to tranquillize a big, potentially aggressive animal demands perfect circumstances and flawless actions on the part of the officer who approaches to deliver the sleeping potion. The tranquillized "threat" then has to remain co-operative until removed from the scene.

Otherwise, Plan B will always be executed, so to speak. No one can dispute that a dead elk, or moose, bear, wolf, deer or cougar, poses exactly zero risk to any city dweller. Whenever public safety is so emphatically "paramount" in a populated place, a wild visitor, even if only trying to inhabit a minuscule remnant of its species' historic range, hasn't got a chance.

The elk was not only a victim of its innocent ambling into the wrong place. It was an unwelcome visitor from another time.

Facts & Arguments
Why life is like riding a horse (or at least learning how)
April 3, 2013 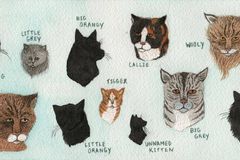