The sun sets early near the equator. Daylight slips away quickly when you're not concerned with time and have spent the entire day digging trenches and laying pipes so that people living in poverty can have running water.

The world was black by the time I returned to my hostel in Ecuador, my heart full of purpose but my belly too empty to ignore. Without thinking, I started walking along the beach toward the town for a late dinner.

At the exact moment that I realized the beach looked different, deserted, I heard the distant purr of a motor. I glanced back and in the moonlight saw an ATV creeping toward me along the shore. From Day 1, my exchange leaders had drilled the mantra "don't walk on the beach alone at night" into my head. And yet there I was. How could I be so stupid? My heart pounded as the motor of the approaching vehicle became louder.

The ATV passed and I laughed at myself for being so afraid. But as quickly as my elation arrived, it disappeared as the vehicle hooked around and roared toward me. There were three men on the ATV. As one of them leapt off and ran to me, my mind turned to my mother and how I would be remembered. "This is it," I thought.

He was half my size and screaming at me in rapid Spanish. I'd read about the fight-or-flight response, but never had such an intense out-of-body experience. My body was screaming at me to fight. I tried running away, pushing him, even attempting to burn him with my lit cigarette. I wanted to live.

His machete put an end to any idea I had about escaping. He pushed me to the ground and straddled my trembling body. He swung his cruel-looking knife back and I thought I was going to die. Then the man slashed the strings of my purse and ran with it back to the ATV, which disappeared in the direction of my hostel.

Who doesn't love a good thrill? I can't count the number of times I've fallen to my knees in fits of laughter over some dumb, wild, reckless thing that either my friends or I have done. But this time I wasn't laughing. I'd been warned many times not to walk on the beach alone. I behaved ignorantly: I didn't think anything could possibly happen to me. Does that mean I asked for it? Maybe. 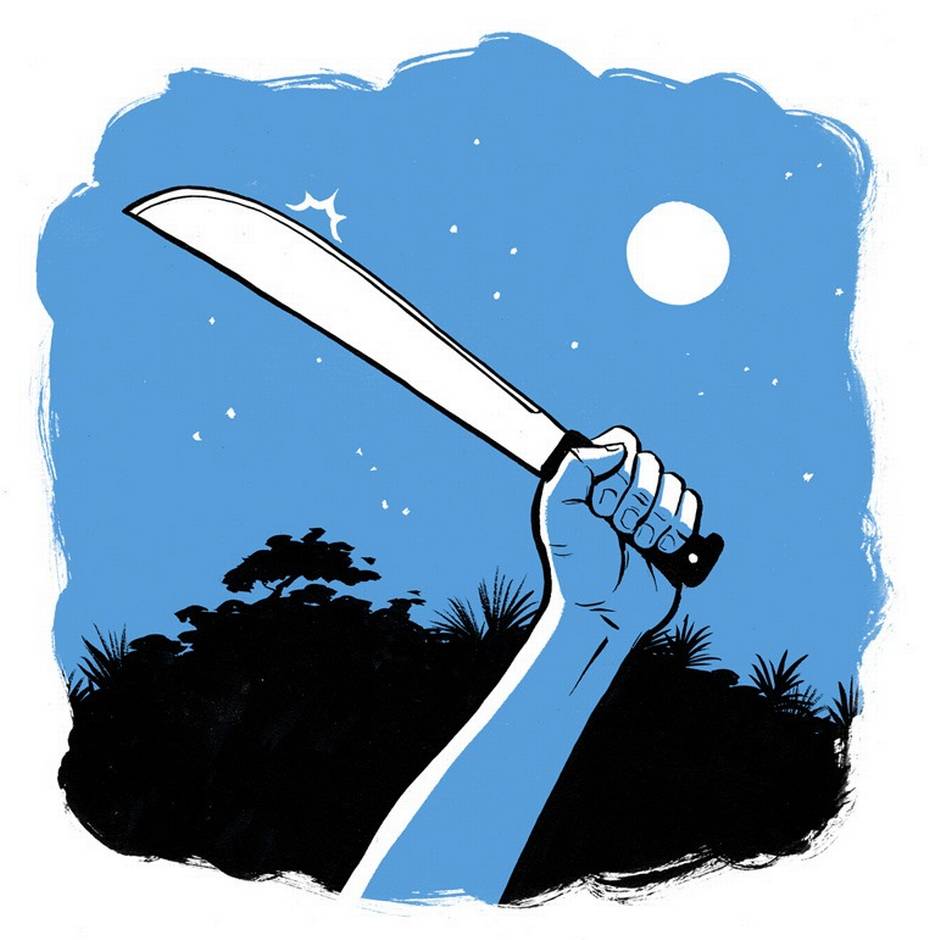 My father had chuckled when I told him I planned to spend a semester of university in Ecuador. “Well, adventure is in your blood,” he’d bragged. He prides himself on his Indiana Jones-like adventures. I always suspected it was a result of growing up on a small Maritime island, where everyone you met was either a relative or friend of a friend. He wanted out and used a career as an undersea welder to travel the world, slowing down only briefly to marry my mother and experience being a father for a handful of years. Then he was gone.

I used to be bitter about him being so uninvolved in my life, but now I understand him – and I blame him for my desire to wander the world. His face lights up the brightest when he’s telling stories of his journeys, and his favourite sound is the screech when runway and oversized airplane tires abruptly meet. We have these things in common.

I visited my father after the Ecuador trip and he used me and my mugging story like a party trick to break awkward silences among his friends. “This is my daughter, Kayla. She just got back from Ecuador, where she was robbed at knifepoint,” he would say, smiling to the room and gesturing at me to tell the story.

Here we go again, I’d think. The story became routine and the gasps from strangers predictable, but I kept up the act with my father because it was obvious how much he loved seeing his adventurous self in me.

I remember taking note of my lack of nervousness before the South American exchange. Like any addict, I was seeking a high. I craved the rush of immersing myself in the unknown. Whether it was a trip to the Caribbean or the Rocky Mountains, I always wanted more the moment I returned home.

My fondest childhood memories consist of running wildly outdoors and finding new places. My boundaries grew with me, from backyard to neighbourhood to town, and as an adult I had absolutely no restraints. My need for adrenalin and pushing my limits granted me many precious memories – and some life-threatening experiences.

It all seemed innocent and fun until I felt the cold steel of a machete at my throat. As the man pushed me to the sand and straddled me, I waited for death while having never felt so alive. Since that experience, though, walking alone at night is my biggest fear – even here in Halifax. I have become distrustful, suspicious of any innocent smiles that greet me during my brief walks from car to apartment.

I understand my muggers – I was in an area where the economic system is corrupt, and the men who attacked me probably grew up thinking crime and violence were needed to feed their families. I was a naive visitor to their home and they took full advantage of that. Even then, I’m one of the lucky ones. But now, my home will never feel as safe as it should.