Our family was having fish trouble. On the first day of the school year, our long-suffering goldfish named Hamburger was seen floating at the top of the tank, which sits in a corner of our kitchen.

Hamburger was listless in a dead-still, wide-eyed stupor. My wife, Christine, and I knew the goldfish had been ailing through the hot summer. I held my breath each morning as my two young daughters monitored his condition.

On the morning of his apparent demise, Anais, who is 10, enthusiastically yelled, "It's dead!" loud enough for our more sensitive 11-year-old daughter, Wyeth, to hear. This announcement precipitated immediate further investigation into the tank by the two of them: switching the light on and off; tapping on the glass; giving Hamburger fish flakes; and gently prodding at his golden scales with a finger.

"Hamburger's dead all right," Anais reaffirmed. Wyeth began to tear up, then broke into uncontrollable sobbing.

As parents, our first instinct was to hug and console her. But she would have none of it. She walked upstairs toward her bedroom, wailing into the universe over a dead goldfish.

Anais kept getting ready for her first day in Grade 5. Optimistically, Wyeth made a get-well-soon card and taped it to the side of the tank for Hamburger to stare at. The ever-practical Christine was finding the fish net to get Hamburger out of the tank and into the garden as compost.

As I enjoyed my second cup of morning coffee on the porch, I took the philosophical approach via Shakespeare: "All that lives must die, passing through nature into eternity." Then I thought briefly on the three Hindu vanities: youth, health and life. Hamburger's youth was long gone, his health had been questionable throughout the summer, and now his life was gone too.

As I approach 50 years of age carrying a full head of dirty-blond hair and a salt-and-pepper beard, I increasingly ponder the simplicity and wisdom of these vanities. Chronologically speaking, my youth may be gone, perhaps long gone, but I am still healthy and I still feel trim and vibrant when climbing, running and sailing.

Perhaps I participate in these activities to the extent that I do in an attempt to keep the last of the vanities at bay, that is, the stage in life where our health slips away and we cling fiercely to life, the life that we have left, goldfish or not.

Recently, however, two events, separated by a few weeks, illustrated the relativism of the first of the three vanities: youth.

The first event occurred while dining with Christine on a rooftop patio blistering in the summer sun. At the end of the meal, I asked our twentysomething male waiter why the air-conditioned restaurant below wasn't open to the public. In a completely guileless tone, the young guy answered: "Well, sir, for an elderly gentleman like yourself, we would have been happy to open it for you."

There it was, the first time I had been remarked upon as elderly. Little did our polite waiter know that he had precipitated a watershed moment for me, my introduction into being seen as old. I left the restaurant only slightly amused and somewhat horrified by my new status in life. And yet there was a kind of awe as well. I was on the cusp of change.

The second event involved breaking the mast on my boat while sailing on Lake Huron. With the mast and sail sickeningly floating in the water, and all steerage lost, I became immediately seasick in the heavy swells.

After struggling to get the rigging inboard, I paddled for the distant shore. I had barely taken three strokes when another "elderly" gentleman of about 70 or 80 asked if I would like a tow. I accepted. Within a few moments, he was hauling my 14 feet of impotent fibreglass behind his motorboat, up the mouth of the Saugeen River toward the boat launch.

Over the thrum of the labouring engine, I heard my guardian angel talking to three grey-bearded friends fishing from another boat.

The three octogenarians nodded sagaciously in unison. "Happens all the time," their bobbing heads seemed to say.

I was beaming. My mast was irreparably damaged, my sailing season was cut cruelly short, but my rescuer had called me a "kid." I was saved, albeit briefly, from being elderly. And I realized in that moment that it was all a matter of perspective. I was approaching 50, I had my hair, my wits and my health, and I briefly had my youth back.

Hamburger didn't die after all. Wyeth noticed that as he floated at the top of the tank, his badly damaged dorsal fin was stirring back to life. Despite appearances, his catatonic gaze was not to be his final death mask.

Hamburger strangely wriggled himself toward the bottom of the tank, then rose slowly upward, as if reading the get-well card taped to the side of the tank. This rhythm, this exotic death dance of a fish, continued for some time into the last days of summer.

Like me, perhaps, furiously holding onto my health at 50, Hamburger had amazingly rallied, and held on to life – precious life – for a few more days. 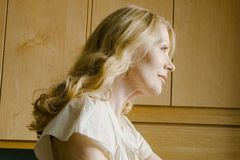 Facts & Arguments
I'm a Justin Bieber fan (and I'm an adult)
October 6, 2011
Follow us on Twitter @globeandmail Opens in a new window
Report an error
Due to technical reasons, we have temporarily removed commenting from our articles. We hope to have this fixed soon. Thank you for your patience. If you are looking to give feedback on our new site, please send it along to feedback@globeandmail.com. If you want to write a letter to the editor, please forward to letters@globeandmail.com.
Comments