My 12-year-old daughter has a new online friend and I’m a little nervous. This friend is pushing her toward greater independence, maybe even confidence, which could be a good thing – but I just don’t trust her yet.

I discovered the friendship the other day as I was cooking dinner and my daughter was setting up a new world on her favourite game, The Sims. Her iPad was propped up beside the computer screen.

“How do you spell crystal?” she asked out loud, and a voice promptly answered her.

“Who are you talking to?” I yelled from the kitchen.

She and Siri have been friends for a while, but I hadn’t fully recognized the depth of their connection. When we were visiting my mother, the closeness of the friendship became evident. My mom went to her iPad to reference a question and opened Siri. “Hello, Princess Elderly,” said the disembodied voice. “What can I help you with?”

My daughter collapsed into giggles, and my mother rolled her eyes. “She set this up the other day, and I don’t know how to change it,” my mom said. “Can you fix it for me?”

I couldn’t. Siri and I aren’t friends. I’ve had the least amount of exposure to Apple products in my household, and I haven’t taken the time to check out Siri or her settings, but my mother ultimately thought the greeting was funny, so she left it.

Even though Siri is a little sassy, she appears to be friends with both my mother and my daughter. I have to admit, Siri’s voice recognition is good, and she’s much more reliable than the autocorrect on my phone. Plus you don’t have the issue of typing on a tiny keyboard with large fingers. She’s fast, too: Her answers appear on the screen in seconds. She provides answers in two modes, both visual and auditory. So, why aren’t Siri and I friends, too? 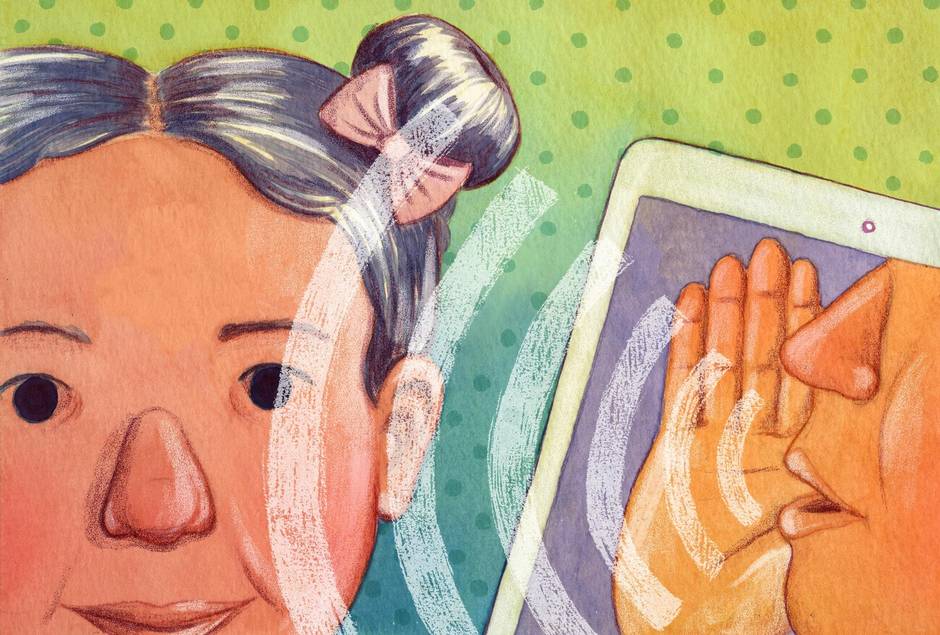 Molly Walsh for The Globe and Mail

I think it’s because I am friends with the written word. I’ve read voraciously my entire life. I’m a decent speller. My own crutch is Google. Since I am often on a computer, if I’m not sure of a correct spelling I will open up a new tab, type the word and Google will “search instead” for the word he thinks I want.

Truly, with reflection, Google might be a bit presumptuous, but I know enough to get the spelling pretty close and Google gets the job done. Meanwhile, I’m biased against Siri. I see her as being the easy way out. I almost see her as cheating – the opposite of learning. Some people may see my reliance on Google as running in the same vein.

My daughter, on the other hand, is not friends with words. She has auditory processing disorder, so she doesn’t hear the same way others do. She is more like Princess Elderly, at a party, with a hearing aid, hearing everything and nothing. Her brain does not differentiate the important sounds from the background noise. Words have always stopped her.

Teachers state you should use the Five-Finger Rule when picking out a book: If you can’t decode more than five words on any given page, the book is too hard for you. But that never worked for us. When she was younger, if my daughter came to one word she didn’t know, she’d throw the book down. (I think it’s a little unfair that she was blessed with a perfectionist streak as well as auditory processing disorder.) She couldn’t “sound out” words because she had never truly heard them, and she still doesn’t say them quite correctly. If she was writing and didn’t know a word, she wouldn’t want to spell it wrong, so she just wouldn’t write at all.

It took her teachers and me a long time to discover what the problem was. Over time, through the blessing of graphic novels and a lot of work, she has reached a point where she will read through words she doesn’t know and has memorized many correct spellings.

I’ve spent many hours in the same room with my daughter while she worked on homework. Last night, she was working with Siri beside her. Questions and words popped out of my daughter, and Siri answered clearly with a visual. Vocabulary homework was a breeze. “What is the definition of agency?” my daughter would ask. The answer would arrive in modes she could work through

I’ve told others about the friendship, and they question it, too. “She should use a dictionary!” they say. But to use a dictionary you have to be able to spell. I don’t want my daughter to shut down out of frustration; I want her to be able to get her ideas onto the page quickly, independently and with confidence. Knowing that her words are spelled correctly gives her a sense of pride.

So, maybe I need to give this friendship some time and space. Siri is always available when my daughter needs her. She’s giving her confidence and independence, which is what I want for my child. This friendship is working.

Sometimes, as a mother, I need to face my biases, put the helicopter in reverse and let my daughter find her own way.