Ronald, my late spouse, was one of those characters who can best be described as walking through life with his foot in his mouth. He craved attention the way I, a Newfoundlander, craved a salt beef dinner. Both afflictions originated in our formative years, especially during the war, when there wasn't enough of anything.

Ron spent those years with strangers, mostly with children as insecure as himself, safe from the bombings in London.

His faux pas were legendary, and could be indelicate or unintentionally offensive. His references to the exorbitant pay scales of civil servants or useless police efforts compared to Communist regimes sometimes resulted in no further invitations.

Still, most people liked him, and at small parties where all knew each other his utterances were guaranteed to keep the party going.

Ron's stories could not be told from a sitting position, but required whatever space the living room provided, with guests seated. He worked best with a contained audience, pacing, turning and gesticulating as he blended life's foibles into whatever verbal trajectory would evoke maximum response. Then the punchline, tears of laughter, and that look of just having quaffed a cold beer in the desert.

He had acquired the appropriate nickname of Archie Bunker, and in his need to remain visible, he often pulled me into his stories. He especially enjoyed telling the one where I drove the car through the garage wall after my crinoline petticoat engaged the gear shift. The image of me leaving the garage wall at 45 degrees always got a night's event off to a roaring start.

I didn't appreciate being singled out in a crowd, but throughout the years I managed to accommodate Ron's style and the way he could contribute to the smooth flow of a party.

Nothing of any consequence in his own life escaped retelling. Even mishaps that caused him great stress at the time would be transformed into comic bread and butter.

This was one of my favourites: Once, during the 1950s, Ron was required to deliver an urgently needed part to an engineering firm in Lachine, Que. We decided to make it a nostalgic holiday as we had been stationed in Lachine with the RCAF, and had met and become engaged there.

For the first two hours in Lachine we went round and round. This was long before GPS or even a map in every car, and we couldn't find anyone who spoke English to give us directions.

As our mini-holiday shrank, along with Ron's patience, we spotted a telephone booth – another rare item in that era.

Ron pulled over: "I'm phoning Ottawa, and if they can't direct me to this bloody firm I'm telling them I'm returning with the part undelivered," he announced.

The car was parked out of view of the phone booth, and as the minutes of our special day ticked on, I settled in for a long wait. Nothing with my extroverted spouse was ever cut-and-dried: A casual "good morning" could lead to extended discourse, as if he needed to empty himself of whatever verbiage had accumulated during an extended period spent with me, an introvert.

It was a lovely sunny day, and I was enjoying the quiet and looking forward to lunch from a French menu.

Then the door of the car opened with a jerk. Ron looked flushed and ready to tackle anyone. Like Archie he wasn't a violent man – all bluster and blather – so I sat silently and waited. Sooner or later he would bare his soul, but he couldn't be rushed.

He needed to ponder a while, to see things framed from a perspective that showed him beyond fault without seeming to blame anyone else.

He might then thunder at the world (assuring me he wasn't mad at me) or paint the incident with the special humour his chemistry dictated.

"Mike wasn't in and Jim didn't know the address," he said. "I searched my pockets but couldn't find it. 'I must have left it in the glove box,' I told him. 'Just a minute, I'll get it.' "

Ron's face began to crinkle up and I waited for the drama, always surprised that a designer who insisted on drawing in ink could be thrown off by the simple things in life.

"Then I couldn't get out of the booth! The bloody door was stuck. I guess I got a little hysterical …"

Ron was seized with the beginning of a laughing fit, but sobered.

"And I said to Jim: 'I'm in this telephone booth and I can't get out, and my wife is out there in the car probably chain-smoking, and when she runs out of cigarettes she'll come looking for me and find my dead body.' "

"Jim said calmly, as if speaking to a child: 'Now, Ron, there's probably something stuck in the rubber edging; just run your hand around the door where it closes.' Sure enough, a bit of rubber was loose and stuck folded over."

The engineering part was delivered and our mini-holiday began – a nostalgic visit to the base, the club where we'd danced the tango and drunk Tom Collinses.

I try to remember those times the most.

Facts & Arguments
From wife to widow to only parent
October 20, 2009 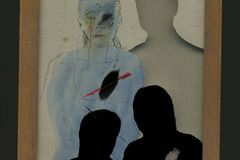 Facts & Arguments
As a young widow, I found strength in numbers
January 12, 2012 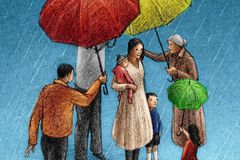