My first cockroach encounter was in the filthy communal kitchen of my university residence in 2009. I was waiting for my boyfriend to microwave his Lean Cuisine when I saw the critter scuttling along the baseboards, weaving through the miscellaneous crumbs and clumps of angularly shaped dirt from the bottom of somebody's sneakers.

Without really knowing what it was exactly, I admired the bug's speed, agility and courage. The little soldier was braving the chaos and horror of a kitchen shared by about 30 18-year-olds, after all – a fate I wished on no living thing.

I remember my dad as a neurotic clean freak who spent every Saturday of my young life making our house immaculate. Maybe that's why I didn't know a cockroach from a butterfly until I was nearly 20. But I had no qualms about the roaches of the world and no reason to fear them. This has always been my general mentality when it comes to creepy-crawlies.

I am a bug person, if such a thing exists. Growing up, I would hang out in the grass, nose dripping and eyes pink and swollen from allergies, collecting ladybugs in the backyard. In high school, I declared myself Saviour of the Spiders and dutifully slapped a plastic cup over each stray one I found, saving them from the inevitability of being smushed beneath the science teacher's shoe, while the other girls screamed disproportionately and called me "gross." Even into my 20s, the rare sneaky silverfish I spot becomes a 15-minute time suck, because I like to study the patterns on their backs and the way their little antennae flick around like tiny fencing swords. It's not like I prefer bugs to people or anything like that, but I sympathize with their plight and admire their will to survive.

From my second to fourth years in university, I lived in a student-run co-op. It was a magical place, complete with a minor mouse infestation, the pungent smell of garbage in the hallways and habitual drunken delinquency. By that time, my experience in residence had immunized me against piles of dirty dishes and sticky, unrinsed alcohol bottles that would inevitably attract an insect infestation at some point. I thought nothing could faze me. 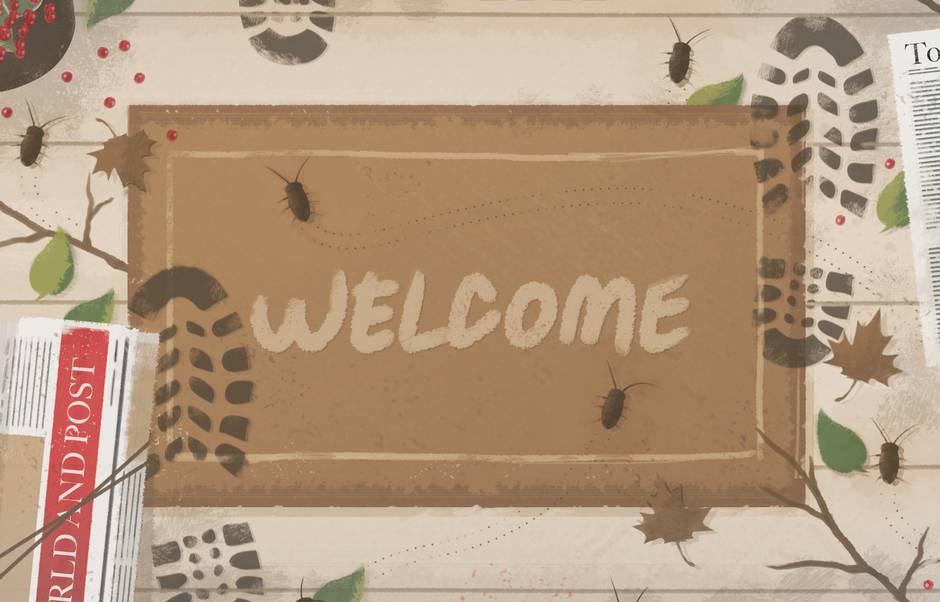 Mark Belan for The Globe and Mail

In my third year, we inherited a coffee maker from my roommate’s co-worker. Being that we were an apartment of five dedicated coffee drinkers (seven, if you counted boyfriends and friends who didn’t technically live with us, but seemed to be a part of the deal), we were aptly pumped about it. My roommate and I set it up beside the toaster and made plans to brew our first pot together the next morning. It was only hours later that I heard a blood-curdling scream from the kitchen (the kind that should be reserved for near-death experiences ONLY). I ran in, prepared to club a rapist, and instead came face-to-face with a large roach that had Trojan-horsed its way into our apartment via the coffee maker. After much pleading from my terrified roommates, I guiltily crushed the bug under an oven mitt, which, for whatever reason, we continued to use for the rest of the year.

Prior to that moment, I had lived by the mantra that bugs were friends, and this was the first time I’d ever felt trepidation toward one. In a single moment, aided by the twisted looks of disgust on my roommates’ faces, I found myself suddenly fearing cockroaches.

Years later, I finally live a roommate-free existence. My apartment has floors that creak and a perpetually stale smell that I assume is the 200-year-old building rotting internally, but I love its large square footage and reasonable rent. As is typical with old buildings, I may have a roach or two living here, as well, I suspect. Not an infestation, just the occasional bugger. They come out only at night, and only briefly.

There’s a theory that immersing yourself in knowledge about the thing you fear can lessen your unease, so I did a little research: I’ve learned that cockroaches are prehistoric, dating back to the time of dinosaurs. They can live more than a month without food, two weeks without water, and more than a week without a head. It is extremely hard to starve them, because, though they tend to prefer sweets, meats and starches, they are the embrace-whatever’s-around type and will consume anything from soap to decaying wood to hair. They can run up to three miles an hour, making them the fastest living insects relative to size. And, much like humans, they live in colonies, recognize their families, mourn deaths, make congregational decisions and suffer when forced to live alone.

My research has brought me a certain peace. Roaches are sophisticated, self-sufficient and highly social creatures, and, since I pride myself on self-sufficiency and a semblance of social competency, I don’t see why we can’t put our differences aside.

I won’t lie, my heart still skips a beat when I see one darting around in my peripherals, but I always let them live. I don’t love their aggressive existence, but I’m aiming for peaceful co-inhabitance.

There is so much to fear in this world: murderers, rapists, abusive fathers, political bombers; the list is ever-growing. So I’m choosing to not be scared of the bugs. There are far uglier monsters out there.