I recently received a master’s degree in Canadian studies. A master’s degree normally takes six years of full time study: four to get a bachelor’s, and two more for the masters. I started in 1983. Looking back, I have to ask myself how did it take 33 years, and was it worth it?

It’s not as if I can now step into a high-paying career. Like most “studies” programs, my degree does not lead directly to a job, let alone a high-paying one.

Thanks to my research, I know a great deal about the provincial film classification agencies. I also know that most people don’t care about them. Eyes glaze over when I start talking about the subtle censorship effect of ratings, or the difference between Quebec’s 13+ and Ontario’s 14A. I could work for one of the agencies, but only a handful of people are actually employed by them, and knowing the history of film classification is not a job requirement. Private industry does not seem to require film censors and opportunities for freelance film censorship are limited.

The lack of work in my field of study does not bother me. I did not start university to get a good job. When I graduated from high school, with mediocre marks, I was already working, and I considered university elitist. My romantic goal was to work at sustenance jobs and write, but I was not prepared for either.

A year after graduation, I took a night-school typing course, since it was a practical skill and helpful for writing. The following year, I enrolled in a part-time college program that could eventually lead to a university degree. My plan was to read great books and otherwise get a liberal arts education.

Some years I took one or two courses, and some years I took none. I squeezed courses in around full-time or multiple part-time jobs, and occasionally took a break to obtain a professional certification. My goals gradually shifted. I took a few practical courses such as computer programming and I became more interested in how books and movies portray gender.

When I finally graduated with a BA in English literature, 13 years and three institutions later, I wanted to continue with an MA in film. Unfortunately, my three-year BA, with good but not great marks, was not sufficient for an MA program. 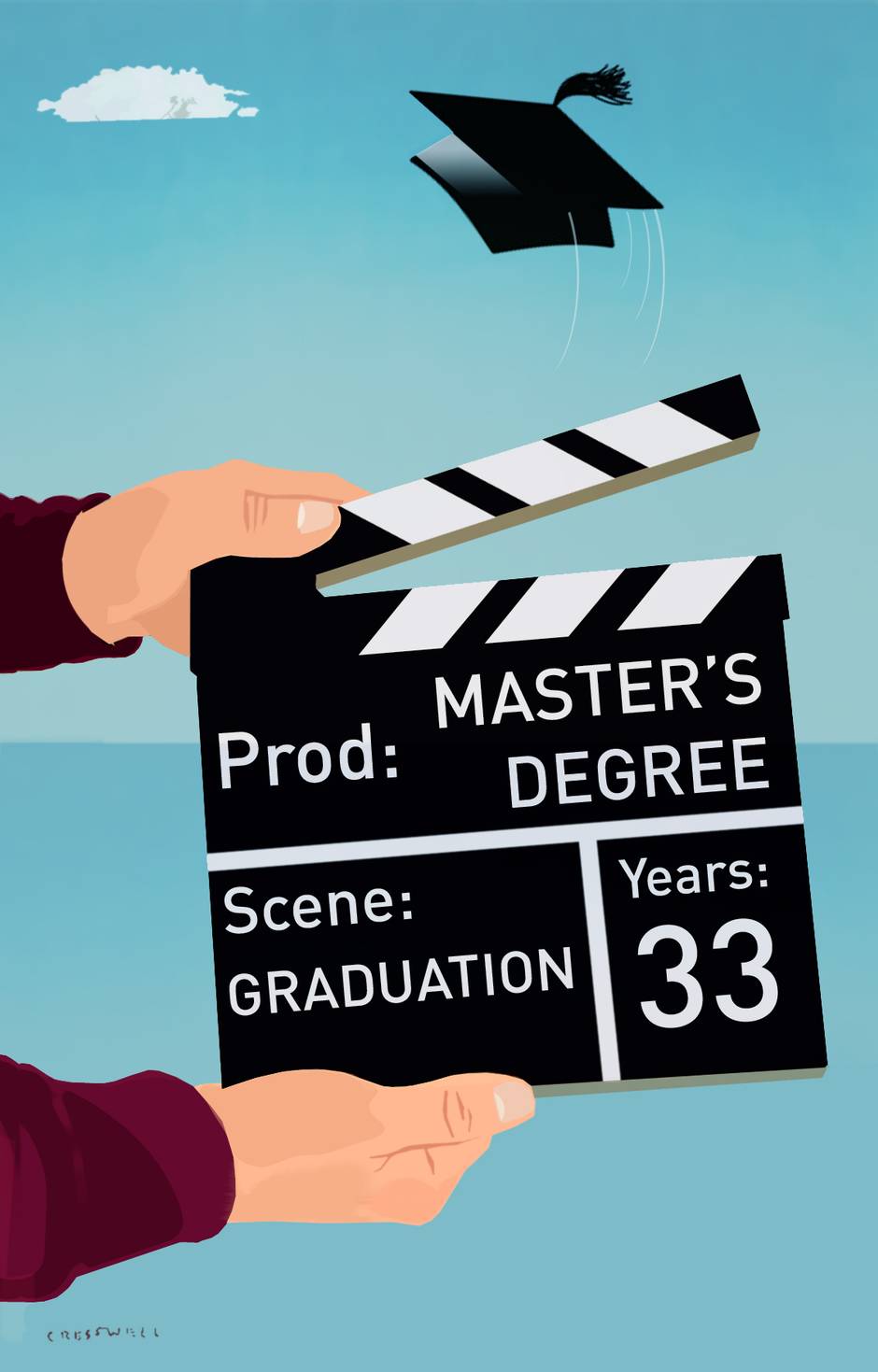 Neal Cresswell for The Globe and Mail

By now I was working as a technical writer, which was not the writing I wanted, but it meant a steady income and job flexibility. It took another 13 years, and two more universities, but eventually I earned an honours BA in Film Studies. This time I had planned and executed better: My marks and interests admitted me to multiple MA programs, with generous scholarships.

I completed the classroom portion of the degree as a full-time student, while working full-time. This was tiring, hard on relationships and annoying to co-workers. The last hurdle was writing a thesis, but life events resulting from relationship and employment stresses forced me to drop out for a few years. When I finally re-enrolled, I wrote the thesis in the usual eight months, while working at two low-wage jobs.

I am a very old recent graduate. As my cohorts kept leaving me behind and I watched my classmates get younger and younger, I felt like a grade-school kid who kept failing and having to repeat years. On the other hand, I have no student debt and I've achieved all my educational goals. It just took a little longer than planned. I’m not sure if continuing despite delays was dedication or stubbornness, but they are not that different. The longer I went to university, the more I enjoyed it, so it was very much worth it.

Did I learn useless knowledge in pursuit of the degrees? Sure, but that’s also been the case in my working life. I learned to operate rollercoasters and cash registers, but have not done either for many years. My once-valued ability to write RPG II code for the IBM System 36 computer is now useless. My 2002 college certificate in Web design impresses no one any more, and although I have an insurance industry certification, it’s been decades since I worked in that industry. I’ve lost track of how many word processing programs I used before MS Word came along.

Much of life is accumulating skills that are only briefly needed. I no longer replace TV tubes, adjust carburetors, build decks, sanitize RV plumbing or change diapers, but that doesn’t mean learning how was a waste of time. Humans are good at accumulating, storing and sharing knowledge. Like food and sex, learning is pleasurable and it perpetuates the species.

My studies may not be making the world a better place, but some future students may find my thesis useful, just as I found gems in some older theses. Meanwhile, I’m easing withdrawal with an online course studying film noir, and, just out of curiosity, I’ve checked the requirements to enter a PhD program.