Skip to main content
Paloma Pacheco
Contributed to The Globe and Mail
Published May 16, 2016

Last spring, when I was teaching English at a private language school, I decided to take advantage of one of the perks offered to staff and signed myself up for Portuguese classes.

Portuguese is a language I’ve always wanted to learn. I love everything about it: the melodic, expressive intonations, the long-drawn-out, almost plaintive vowels, the way it lends itself so well to songs of despair and longing (just consider the fact it has its very own, untranslatable, word for the painful yet pleasurable feeling of nostalgia and melancholy associated with longing: saudade). I consider Portuguese the sexiest of all the romance languages – even more so than French or Italian.

It had been a while since I’d learned a new language. My parents enrolled me in French immersion at the age of 12, and throughout high school, I was subjected to the routine grammar drills, spelling bees and concours d’art oratoire of a formal language-education program. I had grown up speaking Spanish with my Mexican father, and while my language skills had decreased with each year I gained more independence from home, our annual visits to Mexico and the occasional cultural outing had granted me a solid foundation in a tongue other than English. I built on this foundation as an adult through time spent living in Spain and Mexico and was able to recover some degree of fluency – a gift for which I am constantly thankful.

What intrigued me about Portuguese was its similarity to the two romance languages I already knew – yet also its innate difference. When I listened to songs in Portuguese or watched Brazilian films, I felt excited by the words I recognized because of their proximity to French or Spanish – and even more excited by all that was foreign and unfamiliar in the language. It felt new, and its newness felt accessible.

Much research has been devoted in the field of linguistics to how people learn second (and third) languages. For adults, it seems only natural that we would use the languages we already know as markers for understanding and differentiating new linguistic systems; that we would use the known as a tentative map for the unknown. There is actually a word for this (linguists just love naming things) – language transfer.

And so, with French and Spanish as my guides, I dove head first into my first Portuguese class with my Brazilian teacher, Nathalia, patiently holding my hand along the way. 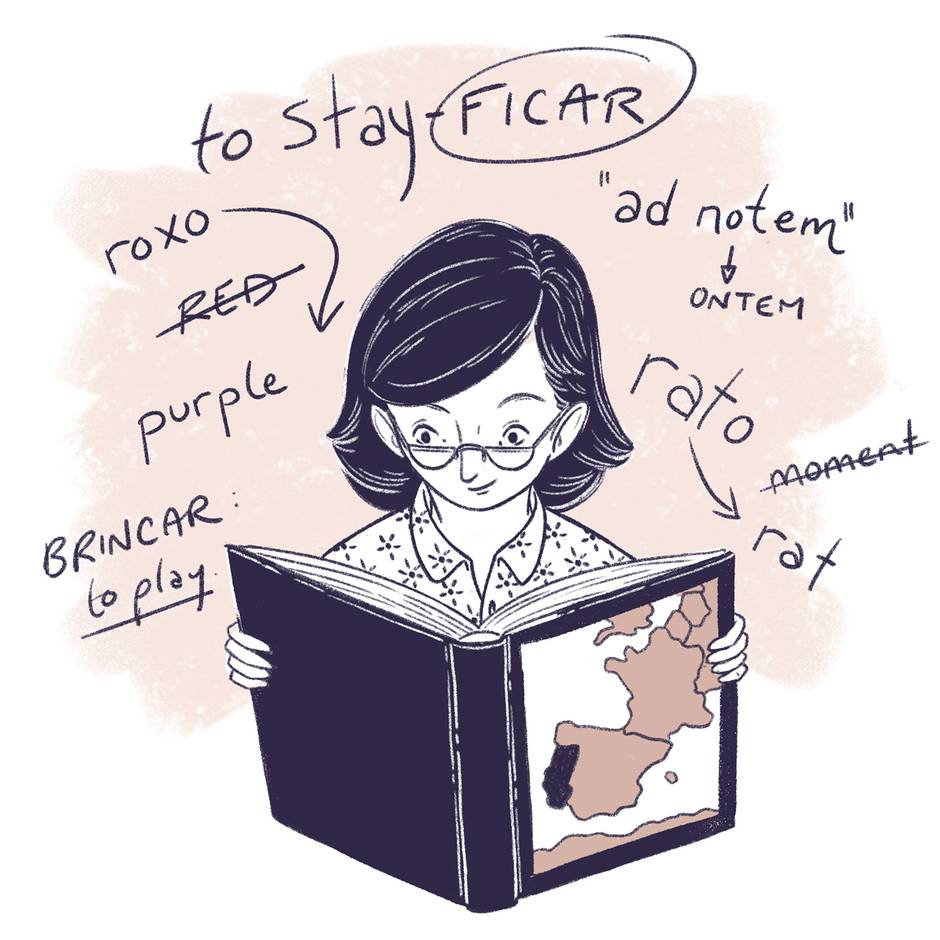 When I’m teaching, the concept of “false friends” is something I always particularly enjoy explaining. “No,” I tell my students, “you cannot say ‘she is embarrassed’ to describe a pregnant woman.” (The Spanish word is embarazada.)

Or, “It’s very nice that you refer to your friend as sensitive (one translation of the Spanish sensible) but perhaps you actually mean that he is thoughtful?”

It seems like the universe’s little inside joke: as if it had foreseen, light-years ago, the blurring of cultures by globalization and decided, hey, you’re not going to get off that easy.

The first Portuguese word that surprised me – really surprised me, in the way only learning something new can – was brincar. Encountering it in a homework assignment, I was ecstatic: Now, this I know! In Spanish, brincar means to jump, so the sentence I was looking at could only mean “the kids jumped together every day after school.” Right?

Wrong. I soon discovered that in Portuguese, brincar means simply to play. Also that roxo is not red but purple; that the verb for stay is not quedar but ficar, and that yesterday is not akin to the French hier or the Spanish ayer, but to the Latin ad notem – ontem. Bridges and trees and pain are feminine in Portuguese though masculine in Spanish, and possessive adjectives take on the gender of what they are describing.

After many years of teaching, it was my turn to become the student once again: to start from the bottom, using the pieces of language I already possessed to help decode this new system in front of me.

I felt like more than a student, though. It was a feeling I hadn’t experienced in a long time – something familiar yet distant, something I recognized as I rolled my tongue awkwardly, uncertainly, over the breathy double r’s of Portuguese, the soft, thick g’s and the altogether bemusing h sound that begins the word rato (not a moment, like in Spanish, but a rat).

I had become a child again. I was finding my way through the world using each new word as a stepping stone, and it felt incredible.

One day, after I taught a class in which I accidentally let slip that I was taking Portuguese lessons, one of my Brazilian students stopped me and asked: “Assim que você está aprendendo português? Você pode entender tudo?” (So you are learning Portuguese? Can you understand everything?)

I was caught off guard and frantically racked my brain for the correct answer (neglecting, for a moment, the realization that I’d actually understood him).

Sim? Yes? Not quite true. Neither was an easy não (no). And then Spanish came to my rescue: I hesitated for a moment before choosing my answer: “Mais ou menos.” More or less.

He smiled. I had chosen correctly. I had found the right words.