Bianca Borden-Heron
Contributed to The Globe and Mail
Published January 14, 2013 Updated May 11, 2018

As I was walking home from work recently, a woman on the street stopped me. Actually, I think we stopped each other.

She was much shorter than I am, and I almost tripped over her while she tried to get my attention. I took out my ear buds, and she wasted no time in explaining that she was stranded in the city and was trying to come up with enough cash to buy a ticket for the GO train.

I opened my mouth to respond, but before I could even spit out the word "I'm," her head twisted to the side, her eyes clearly too frustrated or too angry to look at me.

Startled by the directness of her question, I could only get out, "How? Sorry?"

She rolled her eyes up at me, said "I could see it all over your face," and walked away.

I work in Toronto's financial district, and since starting the job, I have been approached on the street multiple times each day. Not all the interactions have been memorable, but there were things about my encounter with this particular woman that stayed with me: her disappointment, her anger, the anticipation of a refusal, the unwillingness to hear my excuses. But also my inability to say what I should have said, which was that I really did want to help.

I desperately wanted to be able to reach into my wallet, pull out a $10 bill and give it to her, along with wishes for a good trip home. But I couldn't afford to.

At the time it seemed ridiculous to look that woman in the eye and claim I did not have $10 to help her get home. We were on the corner of Bay and King streets, surrounded by corporate offices. I was in professional attire, holding folders.

I must have given off a strong impression of financial stability. So, while a refusal might have been expected, a denial of means would presumably have been perceived as delusional at best, self-centred at worst.

But what I should have said to her is that though I had just finished a day of work at one of the country's top financial firms, I had also spent that day wondering where my next meal was coming from.

While filing paperwork and crunching numbers, I had found the solution: I had about $7 left on a Subway gift card, so I bought a sandwich, eating half of it for lunch and the other half for dinner.

What I should have said is that though I was dressed for work, I was barely managing to appear professional. My pearls were fake, my dress shirt came from a second-hand store, and my coat was third-hand. The coat looks put together on the outside, but the lining is so shredded that if I put something in my right pocket, I retrieve it from my left.

I do have a cellphone, but like most of the things I own, it is falling apart. I bought it from a friend who had an extra one. The back is no longer attached. A few weeks ago, another friend made me a case out of colourful duct tape. Duct tape as an accessory might be tacky, but not as tacky as having the battery showing. As for my monthly plan, I'm talking on borrowed time and making payments sporadically.

What I should have said to that woman is that if I'd helped her, it would have meant one more meal I did not eat, three more subway rides to work that I couldn't pay for, or being an extra $10 short of rent.

During the last year of my undergraduate degree in law at Carleton University, I started applying for jobs. While I wrote cover letters and résumés, I imagined what kind of life I would have this year.

I saw myself walking down Bay Street in beautiful clothing on my way to an office where I would have a desk and a salary. I imagined I'd be happy and fulfilled, pleased to help other people because it would only be right to assist those who hadn't had the same opportunities I had been given.

I didn't know that six months after completing my degree, my reality would be very different.

At work, I only have a desk if I can beat countless other employees to the "hotel" stations on my floor. These desks are booked both hourly and daily, and getting one can be challenging.

Instead of a salary, I have a temporary contract, and that contract pays little more than minimum wage.

I have never been afraid of working my way up, or working for less to give myself an opportunity to get to the top. But when you start out on Bay Street, a place that many already perceive to be the top, there doesn't seem to be much to climb toward.

How could I say all that to a woman who was just looking for a way home?

I don't know if it occurred to her that in a few months I may not have a home at all.

And why should it have? After all, much like my coat, I look put together on the outside. After years of helping the homeless, bike shop loses home
May 8, 2018 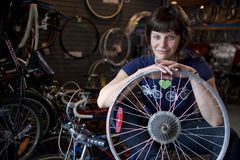