The 1993 Buick Roadmaster sits parked on a narrow downtown street among all the soft-spoken, sleek late-model cars like a corpulent blowhard at a garden party. It glares at the newer cars like an aging bully in a schoolyard. More mocked than feared, the bully nevertheless makes the other kids shut up and avert their eyes when he looks at them. When he finally wanders away, they snicker about him with their friends. So modern cars must react to the Roadmaster.

Roadmaster. In another era a coveted item, now even the name is embarrassing, not to mention its oversized engine, its huge, unflattering trunk and its general air of bloated defiance. If this car were a human, it might choose to be a municipal politician. As its driver, you wear the model name like the insulting nickname someone gave you when you were getting your Learner's Permit.

In these days of eco-awareness, should I feel sheepish when I go out to crank up a 5.7-litre V-8 engine, parked behind a Smart car? I could go all macho about it, like a bully, and laugh at the modern, responsible car owned by the modern, responsible owner, calling it a girl car, or a sewing machine, or asking how well it cuts the grass, adding idiocy to sexism and ignorance.

But no matter – this four-wheeled piece of automotive obesity is not how I usually get around, anyway. Most of the time, I am a commuting cyclist, and therefore the Roadmaster has relatively few miles on it. What's more, in a lot of ways I would prefer the humility and decorum of a small car. Is this cognitive dissonance? It sure is.

So why don't I get rid of it, gas-sucking, road-hogging blight on the environment that it is? One reason is the supreme state of exaltation called the luxury highway drive that only such a car can offer. Hector me for my irresponsibility and environmental obtuseness, and I will invite you to get in and take a ride.

"You know, that generation of Roadmasters has a Corvette engine in them," a neighbour mentioned a few years ago. Oh, I know. This adds to the car's exquisite paradox. Like a grandfather who hides a 1950s-style juvenile delinquent inside. It looks as if it should be parked safely at a golf course or knee clinic. But its sneering, sinewy cylinders were made for more than those pedestrian activities. And in the late summer and early autumn I give them a chance to prove it.

At this time of year, the Roadmaster is liberated to cruise country highways in some of the most spectacular weather this country has to offer. It does so like the oafish glorious misfit that it is.

When I deliver it for an oil change before the trip, I see the mystified mechanic compare the numbers on the odometer to the age of the car. I explain that I ride my bike most of the year. He kindly refrains from asking why a bike enthusiast would own a vehicle about as far removed from a bike as a hippopotamus is from a mouse. Good thing, because then I would have to take a day off work and take him for a ride on rural highways. In the meantime, my family has that pleasure.

The journey starts humbly with a trek through confining city roads to get to the freeway, the mass of steel under the hood sucking unconscionable amounts of precious fossil fuel. When we finally enter the freeway, I gently push the throttle and imagine myself a symphony conductor, for what happens in my mind with this car at full throttle is less reminiscent of mechanical cacophony than of a Wagnerian opera being played over chamber music. At cruising speed, all the small countertenor cars around us gamely sing their delicate song, while the Roadmaster roars an aria.

With the speedometer needle arcing to the right, I say to my passengers: "I'm glad we sometimes take these long highway drives – they're good for an engine that spends most of its time in the city."

My daughter rejoins, "You don't care about the engine; you just like to go fast," as we pass yet another car for no particular reason. Well, yes.

Yet this car is not about dominance. Rather, with all its ludicrous, aircraft-carrier bulk, it is a vehicle of spiritual transcendence. Anyone who has driven Ontario's country roads knows their heart-gladdening offering of vast empty space, primeval dark forest, traditional towns and villages with their sense of reassuring permanence.

Green rolls toward you, hill after hill, blue sky all around. The driver becomes sublimated to a state where person, automobile and nature are one. And if the weather is numinous, you can drive north on Highway 49 from Bobcaygeon to Minden, watching a cloud form the cap of an Ionic column in your mind, imagining some ancient god staring down jealously at your splendid ride. With apologies, I argue that no modern car offers satori like this.

One day the Roadmaster will be stilled, maybe from the price of gas, maybe through mechanical failure, or perhaps if I grow a bigger conscience. It was designed in a more carefree, confident past, when gas was cheaper than water and there was still room on the roads. Today's world needs more brain than muscle from both human and machine, and this car is all muscle – a true anachronism. But what a drive.

Facts & Arguments
The berry-picking shirt: Stuff is where the stories lie
August 15, 2013 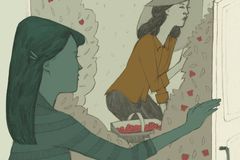 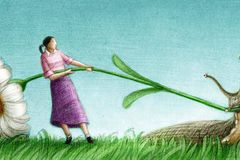