There are many routes for driving between Calgary and southern Ontario, but over a period of 40 years, and much trial and error, we’ve pretty well worked out our favourite passage. Leaving Calgary, we drive south along the eastern slopes of the Rockies, then east past Fort Macleod and Lethbridge, then southeast to the tiny hamlet of Manyberries (population about 10) to stop at the Just One More Saloon, the oldest tavern in southern Alberta. After a short quaff, we resume east along a gravel road past the Saskatchewan border to pick up the Red Coat Trail, with its vistas of the Cypress Hills and the highest remaining concentration of the beautiful and historic wooden grain elevators that not long ago stood as the hallmark of every small Prairie community.

Stop at Weyburn, once the parliamentary seat of Tommy Douglas, then head south about 100 kilometres to the U.S. border. Cross at the microscopic village of Portal, N.D., proceed southeast to Minot, onetime home of the densest cluster anywhere of Minuteman intercontinental missiles. About 1,500 kilometres along picturesque U.S. Highway 2 gets us to Mackinac, Mich., and we head south on Interstate 75 to Detroit, then cross the border to Windsor, Ont.

The route is almost infinitely variable, but the one constant fixture is the crossing at Portal. There is virtually no habitation on the Canadian side; on the U.S. side there’s a long-closed bank, an Australian (!) restaurant, a few houses and that’s it. In all the times we’d crossed, we had never seen another vehicle, northbound or south. Tranquillity reigned.

But at our last crossing, to our astonishment and consternation, we found that a low-budget imitation of the Berlin Wall had been erected. Instead of a tiny booth and a solitary customs official, we encountered a great system of barricades. An official asked a battery of questions and challenges, then gave us a little stub and told us to present it at the exit booth. The stub, which said RELEASED in sans serif caps, seemed astonishingly amateurish: Measuring about 12 by three centimetres, it was badly trimmed and curling, with a patina of bubbles under the laminate. 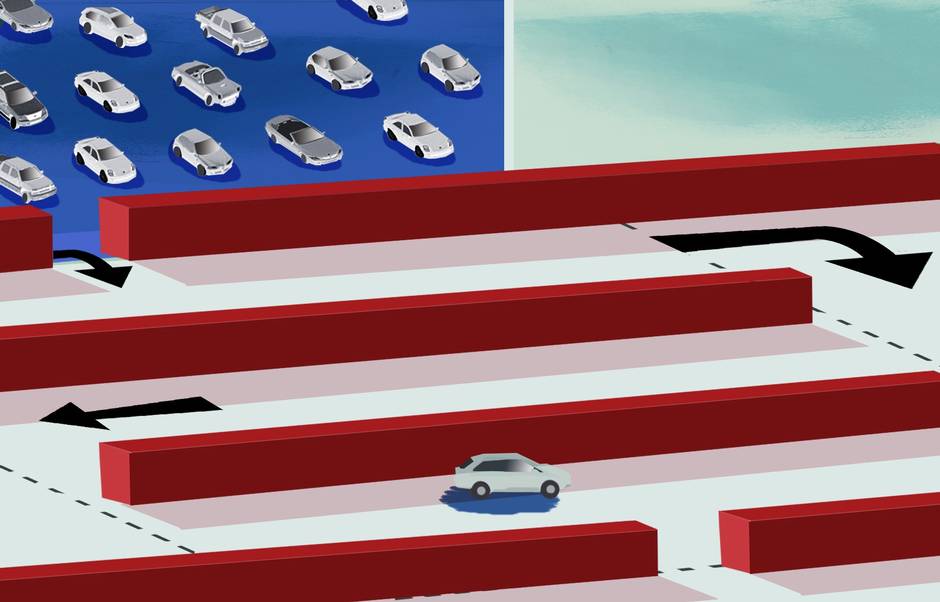 (Neal Cresswell for the Globe and Mail)

To get to the exit, we followed a serpentine route around barriers and walls for about 200 metres to a structure closely resembling a pillbox from a Cold War movie. More than two storeys high, it had no ground-level point of contact, just a window about eight metres above the roadway. We sat there for several moments, wondering what was expected of us, before an official stuck his head out the window. We told him we were supposed to give him our RELEASED stub. He reached down. I stood on my tiptoes trying to hand it to him, but couldn’t come close to his outstretched hand. He ducked back in the booth, then reappeared with an extraordinary pair of tongs, about a metre long, that he extended down toward me. Again, we both stretched as hard as we could. The tongs closed over the stub, and I let go. The stub fluttered to the ground. The tongs were so inexpertly fashioned that the gripping teeth didn’t come together properly.

“Should I pick it up?” I asked. “No, just go,” he replied in a tone of ineffable boredom. And so we departed, eastward bound, wondering if the RELEASED stub of every border-crossing motorist had met a similar fate.

Several weeks later, we began our trip back to Calgary – and yes, we came through Portal. Stopping at the Australian restaurant for a bite, we noticed an elaborate plaque on the wall, replete with elegant crests, classical figures and a solemn inscription, dated 1957:

Between the Dominion of Canada

and the United States of America

Should Quicken the Remembrance

of the More than a Century Old

Friendship Between these Countries.

A Lesson of Peace to all Nations.

I asked our waitress how the plaque came to be in this restaurant. “Oh, they threw it out,” she replied. “We thought it looked nice so we fished it out of the garbage and put it on the wall.”

Fished it out of the garbage. Feeling more than a little deflated, we left the restaurant, crossed the border – wondering if soon there would be a south-facing pillbox occupied by officials with ill-closing tongs – and proceeded home.

That lengthy border had long been prized by many Canadians – and maybe even a few Americans – as a status symbol setting ourselves above other, unsophisticated countries incapable of showing civil deportment toward their neighbours. No more. Now, U.S. politicians outbid one another to build barricades along their southern border. The primary reason evinced for not building northern fortifications is one of simple geography – not that it would be an impediment to the flow of ideas and commerce and the stimulus of meeting friendly people. No, it’s simply that the border is too long.

“Tragedy” is too strong a term for this development, certainly in comparison with the border nightmares currently besetting Europe. But it is clearly a setback, a loss in a world desperately in need of positive symbols.

At least one small café in Portal had the grace to recognize something of value, and rescue it from the trash bin.