My hands are curled up in mittens that were advertised as suitable for extreme temperatures, but aren't up to the job. Ahead of me, I can just barely make out the lights of the community centre through the tiny eyeholes in my balaclava. I try to hurry up the steps, but I'm slowed down by the bulk of snow pants and long coat.

Although it's 9 a.m., it's dark outside in this small Nunavut hamlet. It has been dark for more than three months now, as the Arctic feels the full impact of the Earth's seasonal tilt away from the sun. It's dark and it's cold - below -50 C, but that's just a number. This far above the Arctic Circle, once the temperature drops below -30 C, numbers lose meaning.

I'm a teacher, lured here by the promise of adventure and compelling work, looking to set the tone for the next part of my life. During the dark season, I move between small islands of light and companionship: my house, the school, the bustling Northern Store. The darkness is an intimate journey that I share with the others in this otherworldly, distant place. Outside, we move quickly from one building to another, anonymous in our winter clothes. We nod or wave to people, but it's too cold to stop and chat.

I open the door to the community centre and free my face and head from the layers that have frozen together from the moisture of my breath. With the infinite, perilous tundra at my back, I'm welcomed into the warmth. The room smells of coffee and sealskin boots and is filled with the usual bustle and good humour of an Inuit gathering.

A group of women of all ages chatter and laugh as they settle around a large table. Seated at the head of the table is a woman sent from Ottawa to introduce some new government scheme, conceived from afar, to improve the lives of the Inuit. She follows the many southerners whose footsteps can be traced back to explorers, whalers and missionaries. The Inuit call them Qallunaat, which originally meant "man with large stomach" but has come to mean "other."

The Qallunaat have come and gone from the Arctic for hundreds of years. The Inuit have lived here for thousands and their seemingly limitless tolerance for us and our plans to fix them might well be rooted in their knowledge that the one thing you can count on with the Qallunaat is that they will always leave.

I am the only other Qallunaat in the room. I'm there to represent the school. As I smile and greet the women, I see that the government lady has passed out thick binders full of English words that I know few in the room will be able to read. Very little English is understood or spoken here. Also at the table is an Inuit man whose job is to translate the proceedings into Inuktitut, the local language.

It is Day 1 of a four-day workshop and the government woman speaks quickly about mandates and reporting schedules and the work that she needs to accomplish. The Inuit man's face shows the effort of finding the right Inuktitut words for concepts that are culturally foreign to him. It's painful to watch.

A half-hour in, the translator quietly removes his headset, places it softly on the table and folds his arms in front of him. To me, the gesture says, "This is not worth translating." The Inuit use words economically and become impatient with those who spend them unwisely.

The government lady looks at me with panic in her eyes.

When I made the decision to take this job after responding to an ad in the newspaper, I told myself that I would try it out for 10 months - one school year. Halfway through, I was surprised that I had learned far more than I had taught.

Over and over again, I have been the recipient of the generosity of my Inuit neighbours who have helped me learn how I can, like them, live here with humour, patience and strength. Sometimes generosity takes the form of a knock on my door and the tip, delivered in broken English and gestures, that I shouldn't go outside because there is a polar bear behind my house. Almost daily, it takes the form of a snowmobile pulling up and its driver gesturing for me to hop on the back for a ride to school.

The women at the table smile encouragement at the government lady and look pointedly at me. As my mind turns to ways of making the situation work, some of the women let out little yelps and squeals and start laughing and pointing. The government lady looks alarmed. The Inuit women rise from the table and scramble off into the next room. I get up to follow and find them gathered around a window, pressing against each other to get closer.

Neon pink light spills in the window and over them, dressing them in joy.

One of the women pulls me into the group, toward the window. A gigantic, fiery-red ball pulsates on the horizon, so bright I am forced to close my eyes for a moment. It feels close enough to touch.

The long polar night that begins in November and lasts nearly three months is ending. But this is not the sun I have known all my life - this is a stranger to me. After its long absence, it bursts triumphantly above the horizon in a shocking pronouncement of ownership. All that light and warmth are reflected back to me in the faces of the women who are visibly proud of this High Arctic gift. I am rocked by a jolt of joy and gratitude so intense that it takes my breath away.

"Wink at the sun for good luck," they urge me. I want the world to stand still. I am exactly where I am supposed to be. I wink and turn back toward the meeting room.

I'll go invite the government lady to wink at the sun. She could probably use a little luck - and a little help. 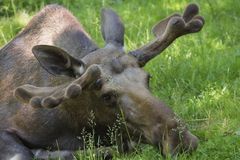