This year I spent the summer in a trailer. My friends were shocked.

"In a big fancy Winnebago?"

The trailer I stay in is 98 square feet. I read somewhere that compact living is good for the soul. It's true: RVing is a great equalizer. Nobody seems vaguely interested in what you do for a living. The guy with the scrubbiest job may have the spankiest new fifth-wheeler, with black leather sofas and granite countertops, while the professional has a 1968 Volkswagen van.

Who cares? It's my happy place.

I'm not saying it's perfect. There's more talk about sewage systems than I care to hear. There's gossip galore.

"Keep away from her. She's crazy. Double crazy."

"Her dog runs around and poops in our site."

The RVers are in a snitter because the manager is talking about allowing tenters. Tenters!

So why do I love it? 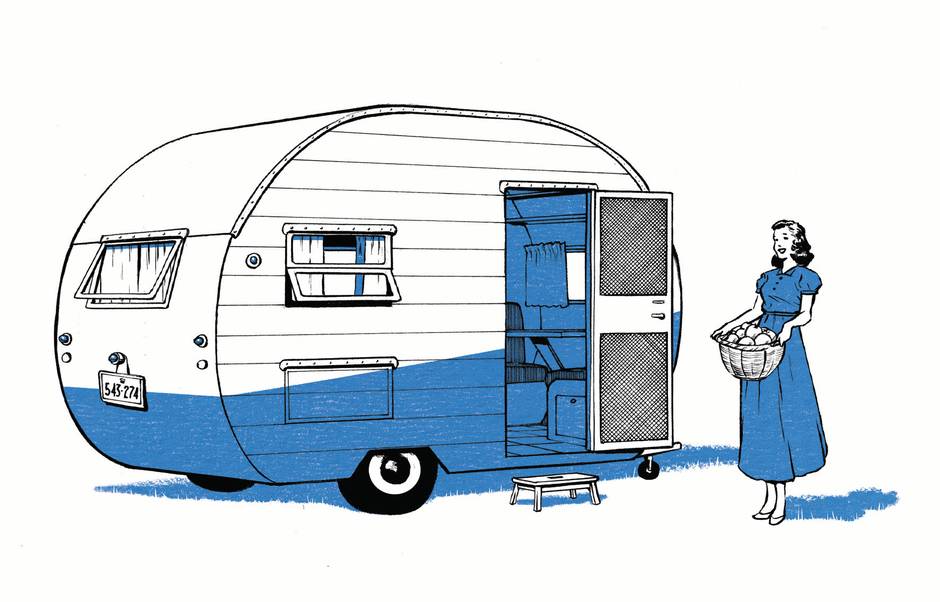 The Portuguese neighbours catch crab, fish and clams and share the bounty with us. Women of all ages sit at a picnic table and convene over jigsaw puzzles, chatting optional. The dogs and kids run around like dogs and kids are meant to run around. There’s a sandbox and swings and a tetherball, but the children’s favourite activity is hurling apples from the tree. I collect them and make applesauce. It could be the 1950s, the place time forgot.

The boozers have their own corner. Sometimes someone gets out of control and we’ll be sure to be rehashing it for the next few years. Each site has a bonfire, and I imagine I’m in a Travellers caravan.

Life is lived outdoors. I get to know the life cycle of a dandelion. I sweep pine needles off the pallet porch. Our trailer is surrounded by blackberry brambles whose rhizomes slither underneath us like snakes and I leave them because I love the idea of sleeping above live fruit.

I pick the berries when they are warm from the morning sun and eat them over ice cream. For breakfast. Who cares?

I take my coffee cup and follow the site’s gravel loop, saying good morning to my fellow campers. I sneeze and someone across the park shouts, “Bless you!”

Two identical trailers have arrived. Everyone wants to know what’s up with that. I approach: “Who are you?” They’re roofer brothers, hired to repair the local school. Tomorrow everyone will know.

There’s a community garden and shelf of books and a box of free stuff. I picked up the makings of a dollhouse. The little girls come to my site to play.

There’s a joke-telling contest and a talent show.

The three-year-old gallops around in a pink tutu. The crowd roars.

The weekdays can be surprisingly quiet. Sometimes I’m the lone camper in the site, surrounded by empty trailers, yet I don’t feel isolated.

In the evenings three cats come to visit, especially if we’re barbecuing fish. Sometimes a raccoon gives a rattle-growl in the night. I’ve named the local slug and bee Slimy and Buzzy.

There are plastic flamingos and garden gnomes and hummingbird feeders. So I, too, set up some garden kitsch. My husband groans at the figurine overseeing my potted geraniums. He puts his foot down and refuses the plastic gardenia fairy lights.

One day it rains. It’s dark, cool and wet outside. I stay inside, listening to the patter of rain on the roof and my book on tape. I lie on the kitchen nook/sofa/bed, hand sewing or painting my nails. Enjoying the moment.

I get tired of climbing over my husband to go to the loo at night, so he turns the kitchen nook into a second bed. We cuddle and read together in a little snuggery, then he moves to sleep in the other bed. I pull the curtain and pretend I’m in a train berth. If it’s windy the trailer even gets train-shaky. At 6 a.m., my preawakening, I crawl into my husband’s bed-nest and go back to sleep for half an hour. This new arrangement is surprisingly romantic. Don’t come a-knockin’ when the trailer is a-rockin’.

I start to energize. I pick 20 pounds of berries and make jam. I take out the gardening gloves and pruning shears and trim back the brambles. I carve an arbour out of the cedar branches. I become a pruning maniac, attacking the dead heads around the entire campground. I rake up the dead leaves and drag the old branches to the compost heap. I paint the white picket fence. I work up a sweat. It’s been a long while since I’ve worked up a sweat.

“Where is Carol and what have you done with my wife?”

This is my movie moment. I learn that the stresses of city life have sapped my strength, and here I have reclaimed it. I feel 20 years younger. Compact living is good for the soul.