A couple of months ago, I made the bold decision to move to the big, scary city of Toronto. It had been a few years since I'd graduated from Queen's University in Kingston and moved back home to Newmarket. I was getting a little too comfortable with the home-cooked meals and spending Friday nights drinking tea and binge-watching Downton Abbey with my mom. I started getting restless, and knew I needed a change – and I think my parents needed a break from my fake British accents.

I was already commuting downtown most days for my improv classes at Second City, so moving closer to the hip and happening comedy world seemed like the logical next step. Most of my friends were off becoming doctors or lawyers, or putting down payments on houses, so I felt it necessary to do something equally prestigious, such as quit my job and go become Tina Fey.

I found myself a spot in a house in Little Italy with some friends, and accepted the sad truth that all the money I'd been saving up for three years was going to be spent on pasta and gelato.

While the vast number of food options and the chance to watch charming elderly gentlemen sipping espresso on every corner were great, I often felt overwhelmed by the city. You could say I'm a small-town girl, you know, living in a lonely world, because my roommates have grown-up jobs and go to work during the day.

Until now, I've lived in the same house my whole life. I'm used to going out for runs and having the crossing guard make me wait to cross the street safely (even when there are no cars), and having everyone smile and wave as I pass them by. This is something that has yet to happen to me in Toronto.

When I go for my runs around parks and neighbourhoods in Toronto, I smile at everyone along the way – mostly because I'm usually thinking about what I'm going to eat when I get home, but also because it's what I've been trained to do – but no one ever smiles back. This adds to my feelings of loneliness and melodrama. To be fair, I have yet to master how to smile with my mouth closed without looking like a total creep, so that's probably on me.

Much as I love living in this new and exciting place, and smelling that very potent garbage "musk" everywhere I go, I struggled to feel the sense of neighbourhood that I longed for. That is, until I met Caesar. 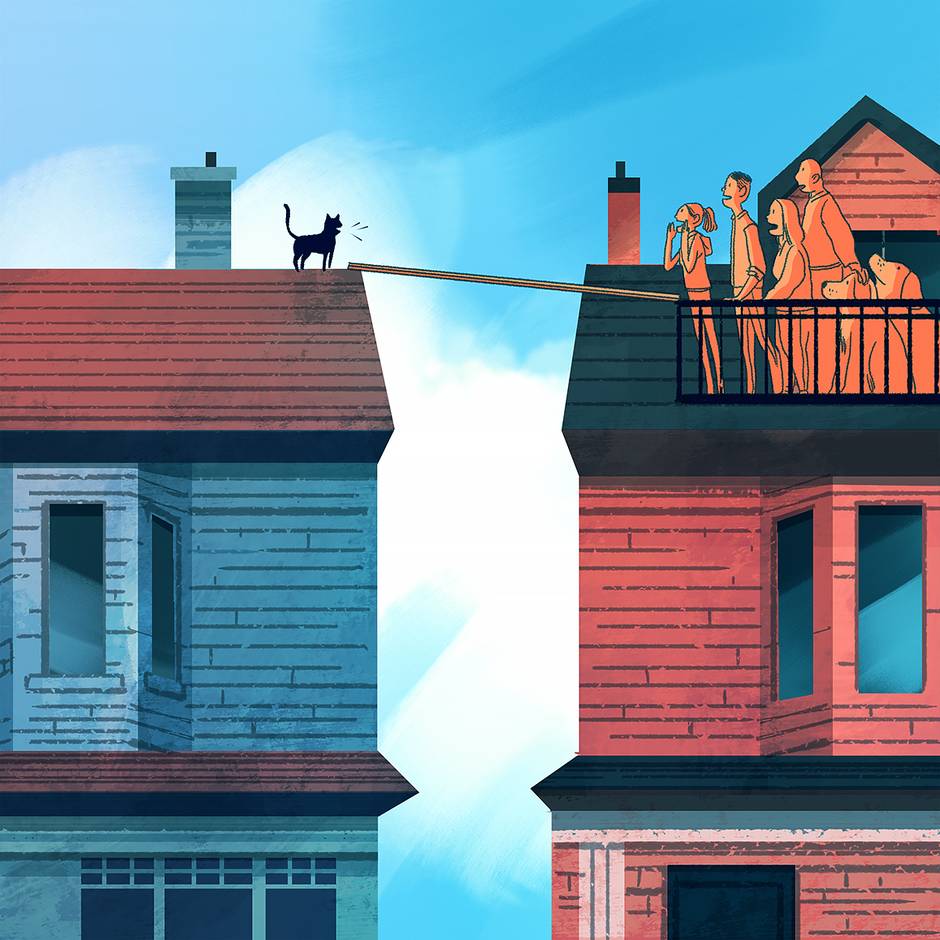 Irma Kniivila for the Globe and Mail

I was sitting with my laptop, looking at menus for various restaurants I’d like to try – you know, the kind of stuff grownups do on a Tuesday afternoon – when all of a sudden I heard a loud “meow.” I was confused as to where the sound was coming from and kept searching out my window until my eyes finally met those of a white cat perched on the roof of the house next door. That was when my phone rang and my roommate informed me that a cat had been stuck on the neighbour’s roof since the night before, and they thought that the only way to get to it was from our balcony. My day was about to get a whole lot more interesting.

Within minutes I met my neighbour and the roommate of the cat’s owner from down the street, and the three of us fashioned various wooden “bridges” in an attempt to rescue the cat. This went on all afternoon. We tried from my balcony, the roof, my neighbour’s balcony, and then, lastly, through my bedroom window, but poor little Caesar was having none of it. The hours went by, and eventually I had to leave to get to my internship, but I hoped they would figure it out while I was gone.

When I returned home at 10 that night, I was heartbroken to still hear faint meowing. At that point, the cat’s owner was home and he’d gotten my number and called to ask if it was too late to come over and try again. Watching endless hours of Friends on Netflix was just going to have to wait. I had a cat to save.

I came downstairs to meet the owner and was surprised to find that a small crowd of people had accumulated. I met the guy next door with the two big dogs, a girl who lives behind us, and a girl who had responded to my roommate’s message on the Bunz Facebook forum asking if anyone nearby had a ladder. The girl didn’t have a ladder, but she was determined to go find one for us.

Soon enough, I was on my balcony again with individuals who a few hours ago had been strangers to me. While we were trying to get everything set up for the “bridge,” Caesar got himself up and started to cautiously claw his way across the steep slope of the roof to make it safely onto the balcony like a young Tom Cruise.

He was reunited with his owner and the rest of us slowly made our way back to our respective abodes, glowing from our mission accomplished. My roommates and I plopped ourselves down on the couch to chat, while Ross struggled hilariously with Freddie Prinze Jr. on Friends playing in the background. My house finally felt like home.

All these people had gone to great lengths to try to save a cat they didn’t know for a guy they’d never met. That being said, we can now all rest easy without the sounds of meowing.

But I think we can all take the time to try to be more patient and kind in our day-to-day lives. And maybe, just maybe, my neighbours will smile back at me now when I go for a run. Nothing brings people together quite like a cat stuck on a roof.