I have two childhood memories of soccer. One involves rushing ahead on a breakaway to score a thrilling, game-winning goal. The other involves interrupting the excitement of a kid making that exact play because I blew my whistle and called him offside.

The life of a junior soccer referee is a lonely one. No one cheers for you, no one takes pictures and no one points you out as being their son.

At 13 I had played for six years, but there were no local clubs catering to my age group. My friends, forced to retire early, turned their interests elsewhere – usually to girls – but I wasn't quite done with the sport that had taken me from community centre to community centre in the badlands of Winnipeg.

In no time, I was studying a little green book called FIFA Laws of the Game, which was about the thickness of a Driver's Ed manual and probably published by the same company. I learned that I was to be paid a whopping $25 a game, but that I had to buy my own whistle and uniform. They would provide the red cards (the yellow ones, too).

The prospect of handing out those cards frightened me. Should I make the players pick a card as part of a dreadful magic trick? I decided to hand them out normally, but considered writing little notes. On the yellow card it could say, "Son, you are on a one-way path to Palookaville," and on the red card it could read, "Take this card back to hell!" I wanted to create a redemptive blue card for those who had been properly rehabilitated. Too much overhead, though.

At my first game, no matter how much I tried to look like just another spectator, my uniform gave me away. And everyone knew it was my first game. They could tell.

The players lined up and I tried to say something cool like "Keep it clean, boys" or "Let slip the dogs of war," but all that came out was "Okay." I blew the whistle and they kicked off.

Instant panic. The players moved so fast! Much faster than the illustrated ones in the rule book. It occurred to me that I had to start running to keep up with the play; lazily watching from the centre circle was not a viable option. 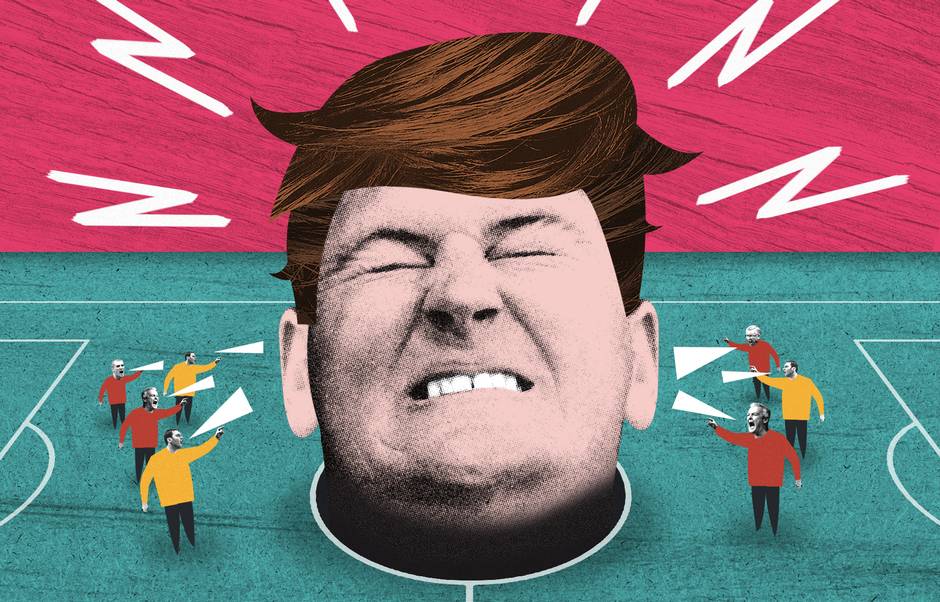 Nate Kitch for The Globe and Mail

Suddenly, a pass was intercepted and a player rushed ahead on a breakaway. Every parent rose and cheered, louder and louder … until I blew the whistle, stopping everything. He was offside. Anyone could see that. So when a parent yelled something unclear, but undoubtedly awful, at me it was shocking. There was another yell and another, slowly building into a cacophonous stream of anger. I completely forgot what to do, so they yelled some more. I wanted to approach them and explain my reasons for ruining whatever photo was about to be taken, but I merely sauntered back to position, hoping for sympathy from the players, who only looked away in disgust.

Whenever there was a break in play, I ran off the field and leafed through the rule book, desperately hoping to find a clue to why I was attempting this horrible career. A couple of times, I actually brought the book onto the field, holding it at my side with a finger locked in a page.

It was time to make an example and administer a penalty for a tripping offence. I sternly walked up to the perpetrator, reached into my pocket for the yellow card – and dropped both cards on the ground. Bending over to grab them, I muttered, “One of these is for you.”

By the end of the game, I hated soccer. The yelling had evolved into a permanent hum of dissatisfaction. My whistle, soaked with drool, stuck to the corner of my lip like a Cheerio. I yearned to run up to the departing players and say: “You don’t know what you have. Stay on your side of the game.” But I said nothing, and waited alone for my ride.

In the following days, I expected to be banned from soccer fields and stripped of my certificate. When my mother told me the guy from the soccer association was on the phone, I knew it was only to keep me in place until the police arrived.

“Hey Chason, can you work Thursday?”

“What? What about the game?”

“The one I just refereed. It went horribly. Everyone hated me.”

“Who gives a damn? Can you work Thursday?”

The weeks that passed were a parade of parents yelling and players giving me lip, of fans booing and coaches shaking their heads, all of it slowly merging with my low self-esteem. My parents would yell at me at home and then I would go to work to be yelled at by other kids’ parents.

Over time, however, the taunts and screams became like the sound of traffic and I learned to pretty much ignore them. Until one game when a father got so angry at a call that he threw his lawn chair onto the field. It was astonishing. I have been angry before, but never so angry that I was willing to give up my seat. It was only a matter of time before they hanged me from the goal by my whistle string.

And so whenever my boss from the soccer association called, I accepted the work less and less often, and eventually he stopped calling. I was ready to move on – as so many of my friends had done – to girls. A whole new world of rejection awaited me.