My daughter is graduating from Grade 12 this year, an event requiring photographs and dresses, two so far. To my surprise, she agreed to go shopping with me. We went to several stores. There were dresses she couldn't look at because they were too much like dresses her friends already had. Others were too long or too shiny, or too …

We went to so many stores, I said: "Why don't you go look on your own? You can always bring something home and then take it back if you change your mind."

I came home from work a few days later to find a dress draped over the banister; a stretchy beige T-shirt dress with a lace overlay, a modest scoop neck and long sleeves. I told her I thought it looked nice, asked if she'd model it for me, but she was busy – soccer practice, friends coming over, something. Days passed. Maybe a week. Eventually she put it on. Maybe it was the light. "Whoa," I said. Her face fell. "Well. It's pretty. I mean, I like it. But don't you think it's a little small?"

When my mother was born, women were still wearing dresses that came to a point well below the knee, revealing their ankles but not much more. I wondered if it was my mother's sensibility objecting, or if I had just morphed into a prude. The usual story – wild youth, censorious middle age.

There's a discussion. We go shopping and she tries on the next size up. It wrinkles oddly around her waist. I bring her a black one, which doesn't seem so skintight somehow, the colour pulling light in. A man standing in the hall next to us is waiting for his wife. He doesn't seem to be looking at my daughter, but because he could I want to scrape his eyes out.

While this is going on, a friend helping me research another piece sends me articles about atrocities against women. In Egypt, women are protesting and then being dragged through the streets, beaten and imprisoned. Then they go home and are beaten by their families, by their brothers and fathers. In India, women are groped, beaten, raped and burned. Female fetuses are aborted there and in China. Meanwhile, here in North America, women are splayed out on billboards, admired, stalked, harassed, abused, raped, beaten, murdered.

I read these stories with horror. I imagine taking to our streets, then going to other countries and yelling at men. Instead, I stay home and tell my daughter she can't wear the tight dress. This is backward. Or frontward. I don't know. I nearly burst into tears later that day when friends ask me if I'm okay. No. I'm not. Not okay. I think I should be stronger, clearer, more certain of the lines that are drawn, I imagine, everywhere. Lines that other people can see, that make life simple, direct, the boundaries certain.

When I tell my husband about the dress debate, he says: "I would have just said, 'not that one. Move on.'" And I think, "right, of course," and don't tell him how aware I am of where she is in her life: 17, humming. The body blooms. There is a bloom. Do we bury it under heavy cloth or do we celebrate it? Do we tell her she should hide herself, deny this bloom? Or do we let her learn to negotiate within it?

I go to buy a new bra and am shocked by the pumped-up contraptions hanging on the wall – bras with gel packs inside them, so you can buy yourself a pair of breasts and strap them on. Then you can buy booty packs to stuff in your underwear so your bum looks big. I thought we didn't want big bums?

"I can't keep up," I tell my daughter. She laughs. She likes it when I admit ignorance. "I could buy a dress that's cut down to here," my daughter says, pointing to her navel. "And slit up to here," I say, pointing to the top of my thigh.

I buy my daughter the dress. I have already helped her select the shoes: five-inch heels. This is akin to binding her feet, I tell her and one of her friends, who has just shown me a picture of the shoes she'll wear – five-inch platforms that look like something out of a cartoon. "That's what my mother said," the friend says, her voice light, her eyes clear.

They have just been to a talk by Roméo Dallaire. He spoke about rape camps in Rwanda. Is it wrong that I am glad that he has saved me, the mother, from having to say "rape"?

When I was 16, my mother walked me to the bus stop one night. We lived in a valley. The road up was narrow and twisty and dark. There were a lot of trees, the houses set back, few street lights. "I just want you to be safe," she said, when I asked why she was doing this.

"What about you?" I asked, "when you walk back down the hill alone?" I was, by that point, four inches taller than my mother. She was slight, grey-haired, and if an attacker couldn't see the way she was piercing him with her eyes, he probably wouldn't know to be scared of her.

My daughter's friends come over to our house to dress before the photo. They come down the stairs on their shoe stilts. No one falls. I am in our hallway when they come through. They tower over me. It's like being suddenly surrounded by a flock of very large birds. They flutter, they giggle. They pose for pictures, and then I watch them totter down our stairs. I worry for their ankles.

Facts & Arguments
My kids and my parents: How it feels to be the meat in the familial sandwich
April 14, 2013 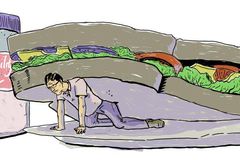 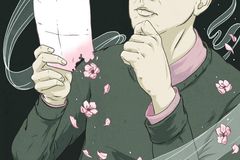