I left the envelope in my mailbox for two months before I retrieved it. Perhaps I didn’t want it in my home, my personal safe space. Maybe I just hadn’t found room for it, so I didn’t want it lingering on my kitchen counter. Or, it could have been that I was avoiding reading the contents. In any case, it sat there, piled underneath the Atlantics, the New Yorkers and my monthly bills, waiting for me to do something.

I knew what was inside. The legal decision it contained had been made right in front of my eyes.

I’d sat there, two months previous, in the row of swivel chairs for victims, their support people, newspaper reporters and communications officers, observing the two parole board members ask the offender a series of questions. Their purpose was to assess his risk to society. I listened, just as the Canadian Victims Bill of Rights permits me to do.

I had done this before, let the envelopes pile up: notices of temporary absence, escorted and unescorted; file reviews informing me of accompanied or unaccompanied two-to-four-hour leaves from prison. Stacks of them lie in a box in my office, some opened and some not. Opened or not, I wanted to receive them. I wanted to know what was happening to the man who had forever altered the trajectory of my life.

As a registered victim, I have rights to more information than in decades past, but it is never enough. Since the crime took place when I was 11, I’ve had 23 years to learn what information I have access to, what I don’t, and what I have to figure out on my own. What makes a 23-year-old man, high on drugs and looking to steal something to repay his debts, break into a family home in the middle of the night, arm himself with a knife and do what he did? I wanted to know.

In the 23 years of his 25-to-life prison sentence, he had come far. He had come from a maximum-security prison, with long stints in solitary confinement for a list of violations – fights, positive drug tests, threats to his person – over to the psychiatric remand centre and finally to a minimum-security prison. There, by and large, he’d developed a good record for the past handful of years.

At previous hearings, this was not enough to grant him what he wanted. Sure, a few leaves were approved – to visit a counsellor, to do volunteer and paid work in the community. I had travelled to his three most recent hearings, over the Rocky Mountains to Alberta.

At each hearing, everyone had been left wanting more. I imagined he was dissatisfied with the snail’s pace of the process, the minimal freedom he was being granted (or not granted) year by year. The parole board members were likely dissatisfied with the small amount of information he shared about his crime, the minimal insight he offered and his limited coping strategies to ensure he wouldn’t pose a risk, but I don’t know that for sure. 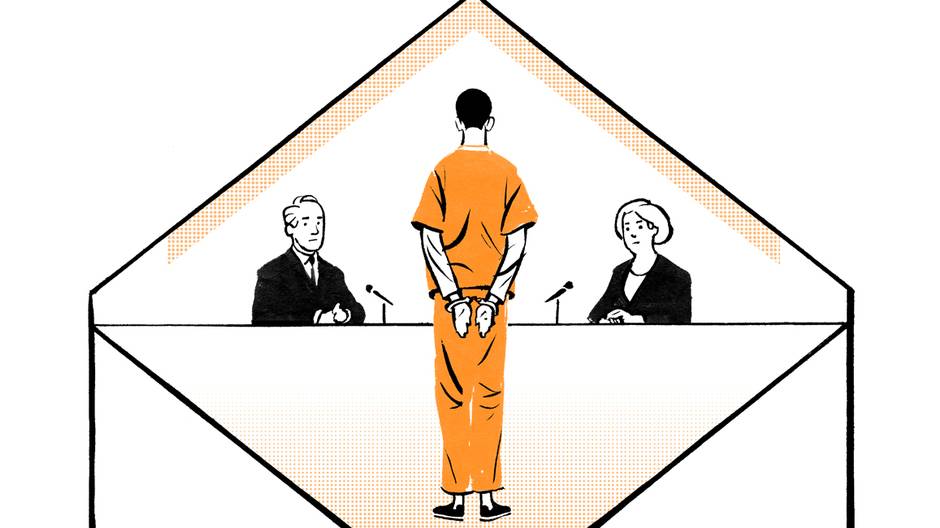 What I do know is that I sat there, five feet away from the backside of my father’s murderer, glancing at the hands that held that kitchen carving knife, listening to him answer questions. I had heard the responses before. I listened and hoped for any glimpse of empathy: an acknowledgment of what he’d done and the grave ripple effects it had on the people who loved my father.

Was it his new parole officer doing a better job that persuaded the members of the Parole Board of Canada to approve day parole? Had he been instructed to be more forthcoming? Or was it that he shared a more realistic plan, which convinced them of his decreasing risk to reoffend?

Whatever it was, it was approved. When it happened, I sighed in relief. I was satisfied with the outcome.

It’s not as though I was cheerleading for his freedom – over the years, I realized I cared less about his life. Instead, I cared about what his rehabilitation meant. I cared about what the denial of a release meant – that not only would my father’s life have been abruptly ended because of a young man’s series of horrible decisions, but this young man’s life too would be wasted, not contributing to a world I felt he had a responsibility to contribute to, considering what he took away.

This release won’t be much different than his previous work-releases, but – as he said – he will also have weekends free to visit his girlfriend. Perhaps he’ll even relax on a park bench and aimlessly walk the streets as a free-but-tethered man. I wondered.

I opened the envelope at a coffee shop down the street from my home and read the eight-page decision.

“You agreed that your index crime is a senseless story, that you hate the person that you were, but you make no excuses today: “It was me. It was all me.”… Throughout the hearing today, you presented as an open book, holding nothing back, and verbalizing an insight that goes considerably further than what is contained in the progressively positive information on file. … Day parole is granted for six months.”

Surrounded by people chatting, music playing and the aroma of ground coffee beans and baked goods, I took a breath and felt life moving forward.