When I was a little girl an old trunk, dust covered, its latch broken, sat in the corner of the basement.

My father's story of the broken trunk was my first window into the journey he and my mother had made to Canada. Postwar immigrants from the Netherlands, they had been allowed to take only a small amount of currency out of a country anxious to boost its recovery. This forced Mom and Dad and boatloads of Dutch immigrants to buy furniture and pots and pans to stimulate the home economy before departing forever.

The trunk in the basement carried their first dishes, their linens, photo albums and a few of the tools of my father's gardening trade. On the dock in Montreal, the story goes, the trunk was dropped during unloading and broke open.

With their precious possessions spilling onto the pier, my frantic father paid a dock man for a rope to tie it together. With knowledge of few words in French or English he had no idea how much he'd been asked for the rope or how much money he'd given.

So the story of the broken trunk and the rope and my father, who always wondered if he'd been cheated, became my first story of the immigrant. The leap in the dark and the encounter with the first place. Where you never know if your trunk fell or was dropped on purpose. Whether you were helped with a rope or cheated on the price.

That story is why, though born in Canada, I feel a tug of the heart when I meet an old Sikh gentleman standing on a street corner in my Brampton, Ont., neighbourhood. With a street address on a scrap of paper he bowed and smiled and asked me with his hands for directions. I had to stop and help. He was my Dad and every other new Canadian who has come as a stranger to a strange land, hoping for welcome and going on trust.

The children of immigrants have that perspective to add to Canada. Last summer I experienced another when, soon after my parents' deaths, I visited their birthplaces in the Netherlands. It was a holiday full of windmills, Amsterdam canals, drives through the countryside and quaint cafés. It also included family reunions and visits to cemeteries where my ancestors are buried, including the grave of the grandmother for whom I am named.

But after I came home, when friends asked about the trip I couldn't describe the deeply unsettling effect it had on me. Then, finally, I found the word.

"How was your trip to Holland?"

I saw the quiet marshland beauty of my father's village of Noorden and the canals he had rowed to reach his field. I saw the Frisian lanes of thatch-roofed farms my mother bicycled with deliveries from her father's butcher shop. How had they ever left?

And my cousins - my tall, fluent-in-English, settled-in-their-skin Dutch cousins who live on boats year-round, ramble the world and yet always return to the towns and villages in which their (my!) people have lived since history was written down. I had to think, that could have been me, my life, my place.

Shocking. It was like looking into a bewitching mirror of possible but never lived experience. Every step of that journey on the red-brick roads and across the great dike that keeps out the North Sea I felt both deeply connected and profoundly apart. My genes are 100-per-cent Dutch. Yet I am not Dutch.

Back at work, I chatted with a co-worker who, like me, had lost both parents recently and that summer visited their first homes in Italy. He understood it all - belonging and not belonging. Awe and loss. What a reversal. We children of immigrants were ourselves the strangers in a land we'd always carried in our heads as some kind of home.

In the aftermath of that trip I am interested in all things Dutch: their social solutions, their take on world events, their work alongside our own troops in Afghanistan. But I also have a renewed sense of myself as Canadian and of the unique perspective we children of immigrants have to offer. In this country my parents chose, with a new sense of what it meant to make that choice, I see how much I belong to its landscape, to its literature, to its future and its crucial conversations.

And we children of immigrants have something special to offer that conversation. We know what immigration costs, the wounds it inflicts and the toughness it requires. And with our ties in other lands we also have a broader vision of the world and know there are ways we've not yet tried here of creating a happy society.

My Dad's broken trunk is long gone but I still have chairs and a sideboard brought in 1951 across the ocean. Because of that curious policy of the Netherlands government, antique dealers in Ontario 100 years from now will have special collections devoted to postwar Dutch furniture.

I'm saving mine for my great-grandchildren. I hope those oak pieces will remind them to honour the immigrant's journey, to pay attention to solutions found in other countries. And to not forget to welcome the stranger.

Amsterdam: An accidentally cool 'village in the village'
November 1, 2010 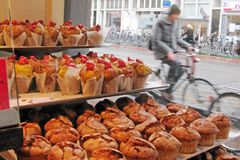