I've been reflecting lately on the meaning of the term "moving on."

It's been 10 years since my husband Les died of lung cancer at 47, and apparently I should have moved on ages ago, even though we were married for 20 years and he was the most significant person in my life.

People seem to give you about a year after being widowed before they ask, "Are you seeing anyone?" This makes me think that moving on means entering into a new significant relationship. In my case, the reality that Les was gone forever did not enter my consciousness until a year had passed. He travelled a lot and worked outside the country for months at a time, so it wasn't unusual for him not to be around. So there I was a year later, just beginning to acknowledge my new reality, and it was time to move on.

What does that mean in the context of losing a soulmate? I don't know, and I don't think others know either. Friends and acquaintances mean well when they encourage us to move on, but I think it's a weasel word, like "closure," that people use without thinking about it or knowing what it means. People want us to move on because our grief makes them uncomfortable and it forces them to confront their own mortality. But I cannot be responsible for others' discomfort. I have confronted my own mortality and I am comfortable with it. You cannot live for a year and a half with a person dying of cancer without confronting the concept of mortality in general, and your own mortality in particular.

I explained that it was difficult to find a single man my age who takes a Mike Holmes approach to home maintenance, who cooks (Les lost this skill immediately after we got married) and who has a fondness for the real Socrates. End of boyfriend conversation.

Three years later that teenager's sister, after graduating from university, decided to work in Africa for a year. Before she left she asked me what Les would have thought about this decision. Does this mean she had not moved on, or simply that she missed him and would have valued his input?

Every spring I cry. Les and I had planted ornamental pear trees in front of the house we lived in for the last seven years of his life. I have since moved, but I often pass by the house because two of our greatest friends still live on that street. The pear trees are spectacular when they bloom. Recently my friend told me the trees were beginning to bloom, and my tears welled up. Does this mean I have not moved on?

Every Christmas I laugh. Les installed white Christmas lights on the same house that can stay up year round because they are visible only when lit. That's fine when you're a perfectionist like Les, because you keep on top of the burned-out lights. The new owners do not take the same approach to Christmas-light maintenance as Les did, and over the years some of the lights have burned out. Now at Christmastime the house looks as though it should go to the dentist.

Last Christmas, the gaps were filled with red lights, which looked quite alarming. Every Christmas Eve my friends and I go for a walk, and when we stop in front of my old house we laugh and say, "Les is spinning in his urn right now." Does the fact that we keep bringing him into the conversation mean we have not moved on?

Does moving on mean not thinking about a person, place or thing once they are no longer present, either in your environment or in your line of vision? Out of sight, out of mind? If so, then I have moved on from some places where I have lived and some people I have known. But most relationships that Les and I entered into as a couple are still strong and it is unlikely I will move on from them.

Can anyone really move on from 20 years of life? We changed and we grew, as individuals and as a couple, during those years. The self-confidence I feel today is largely thanks to Les's unwavering support whenever I wanted to try something new. He would say, "Go ahead, I'll back you up." I cannot explain how empowering those few simple words were. Why would anyone want to move on if it means forgetting that someone once believed in you so much they would support you unconditionally?

Not knowing what the term really means I cannot say if I have moved on, but I can say I am carrying on and moving forward. Even so, I will still laugh every Christmas when the vision pops into my head of a spinning perfectionist looking in helpless horror at the gap-toothed lights on a house, and I will still cry every spring when the pear trees bloom. 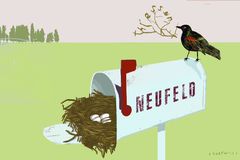