The knock on the door was persistent. I opened the door and my little six-year-old neighbour Oscar stood looking up at me with serious brown eyes.

“Our experiment worked!” he said, and thrust a piece of white paper with childish black printing into my hand.

I looked down and grinned. Indeed, it had.

I live on the edge of the boreal forest in Alberta. The countryside has thick woods of aspen, spruce, birch, larch and pine, and collections of delicate green moss hide among their roots and fallen logs. There are also lush expanses of grassy meadows and wildflowers where cattle or bison graze and poop.

It’s a perfect place for a crazy mushroom hunter. People wonder why I bother with a hobby that could kill me if I make a mistake and my answer is simple: It’s because it’s so much fun.

No one is safe at my home during mushroom season. I don’t make my husband, family and friends eat the mushrooms – but they certainly have to look for them.

Mushrooms show their faces as morels in the spring. Oyster mushrooms, fairy-ring mushrooms, boletes and others reveal themselves in the summer. But any addicted mushroom hunter will tell you the most fairy-tale mushroom season of all fall, when the earth sprouts its dark secret fruits in every shape, colour and size.

I stumbled onto mushroom love. As a kid growing up on the Prairies, the closest thing I got to a mushroom came out of a can. Everything else was poisonous – or so my mom said. Years later, I grew tired of mowing down their little lives with my lawnmower. After 32 hours of mushroom classes and countless hours spent walking in the woods with twigs in my hair, I’ve become a bit of a nut about them.

And so I feel compelled to give my husband, family and friends an assortment of brown paper bags and baskets to gather their finds. There is much laughter and a little trepidation at first as they wander through the trees and grass. The fall trees are a riot of rust, orange and shades of green and the air is cool, with the earthy scent of leaves, dirt and moss. Before I know it, they’re walking slowly, noses close to the ground and then triumphantly whooping “Here’s a puffball!”

When we’re walking back to the house to fry up some of these lovelies with butter, everyone sighs and says, “They are actually quite beautiful.” But they add: “We’ll pick them. You eat them. Someone has to call 911.” 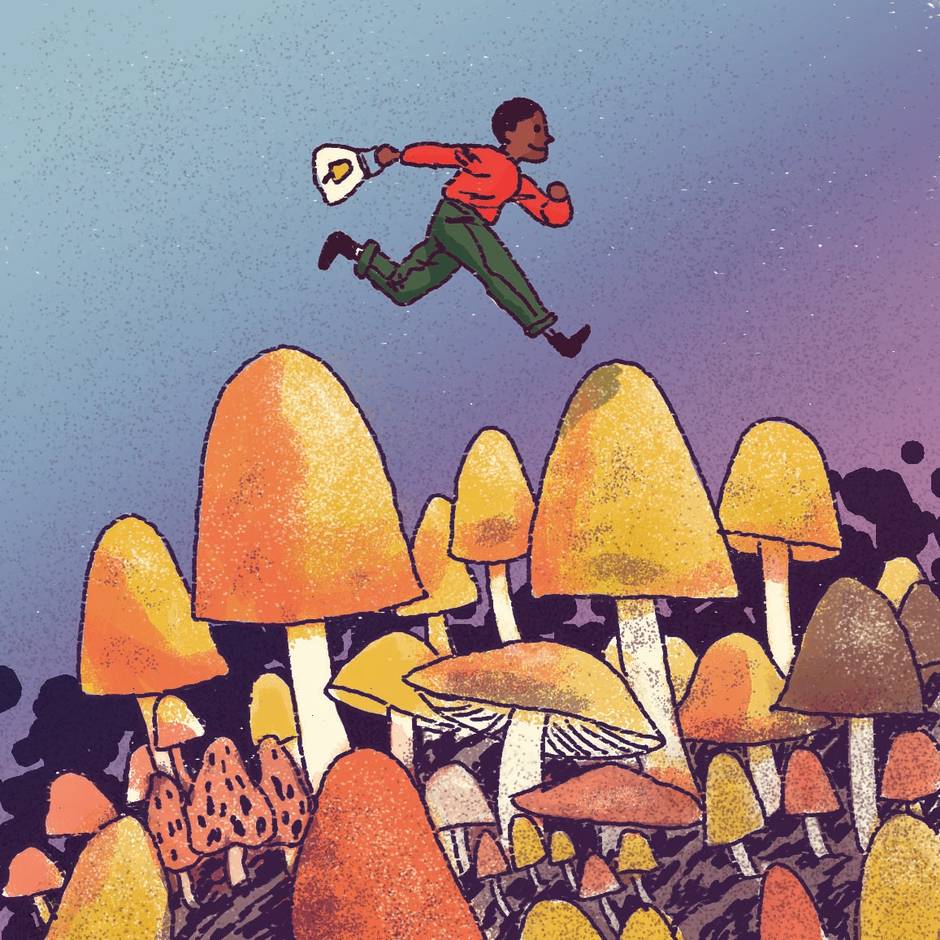 Drew Shannon for The Globe and Mail

The vibrant orange-red poisonous and hallucinogenic amanita muscaria has invaded one of the ditches close by. When I bike past the village of them in the crisp morning, I marvel at how beautifully dangerous they are.

These are the redheads you stay away from. This scary mushroom inspired Lewis Carroll with Alice in Wonderland. It’s covered with white warts and, as I told my six-year-old neighbour: “Even the name amanita muscaria has the word scare in it. It means stay away!”

Oscar and his mother had been picking mushrooms for me. They have loads of them on their acreage filled with horses, a donkey named Nacho Baby, chickens, dogs and cats.

“Let’s take a look at these,” I said as I dumped them onto my counter.

“I know the scary red one is poisonous but I still picked it. I won’t eat it. Ever,” Oscar says as he washes his hands in the sink. “Mom said you like these inky kind before they go inky.”

He was referring to the Shaggy Mane mushroom, which looks like a lawyer’s wig and disintegrates quickly into black inky goo. It’s a delicate mushroom best eaten young unless you’re a lover of squid ink. It was my lucky day. Oscar and his mom had found about 20 of them.

Two of them were too far gone for the frying pan, already decomposing with the black goo starting to seep around the edges. I showed them to Oscar.

“These mushrooms dissolve into black goo very quickly. In the olden days – people would use a feather and dip the feather into the gooey ink to write a letter.”

He looked at me with amazement. “I could do that! I have lots of chicken feathers at my house!”

I said, “Okay, let’s do an experiment. You put these mushrooms into a bowl and let them sit for one day until they turn into liquid. And then try using a chicken feather to write a letter.”

He walked out the door with a bowl of inky mushrooms and a determined look on his face.

Twenty-four hours later, a proud, short mushroom scientist was standing outside my door showing me a scratchy, black ink letter I suspected was written with inky mushroom goo and a feather stolen from the chicken coop.

And another crazy mushroom lover was born.