An admiring gentleman approached me today. This was hardly the first time. After years of receiving unsolicited friendly attention, I have finally accepted that I have become a magnet for male interest.

At farmers’ markets, in parking lots, outside stores, driving down the street – men, young and old, feel compelled to come and speak to me, or call out from their car windows or grin and wave madly.

All this attention began once I turned 50. For many women, this is a challenging time, realizing we aren’t as young as we used to be. Wrinkles may be more defined, decisions about whether to dye those greying hairs and somehow lose that extra weight from carrying babies seem more pronounced. With all this aging going on, the extra attention from men does seem surprising. I’ve had no beauty makeovers, no stylist change my choice of clothes, no fitness guru change my body into that of a 20-year-old.

I was in my teens when I first saw a TR6. I loved the rounded edges, the lure of a convertible – and with a six-cylinder engine in such a small car, I knew it had to be pretty powerful on the road. 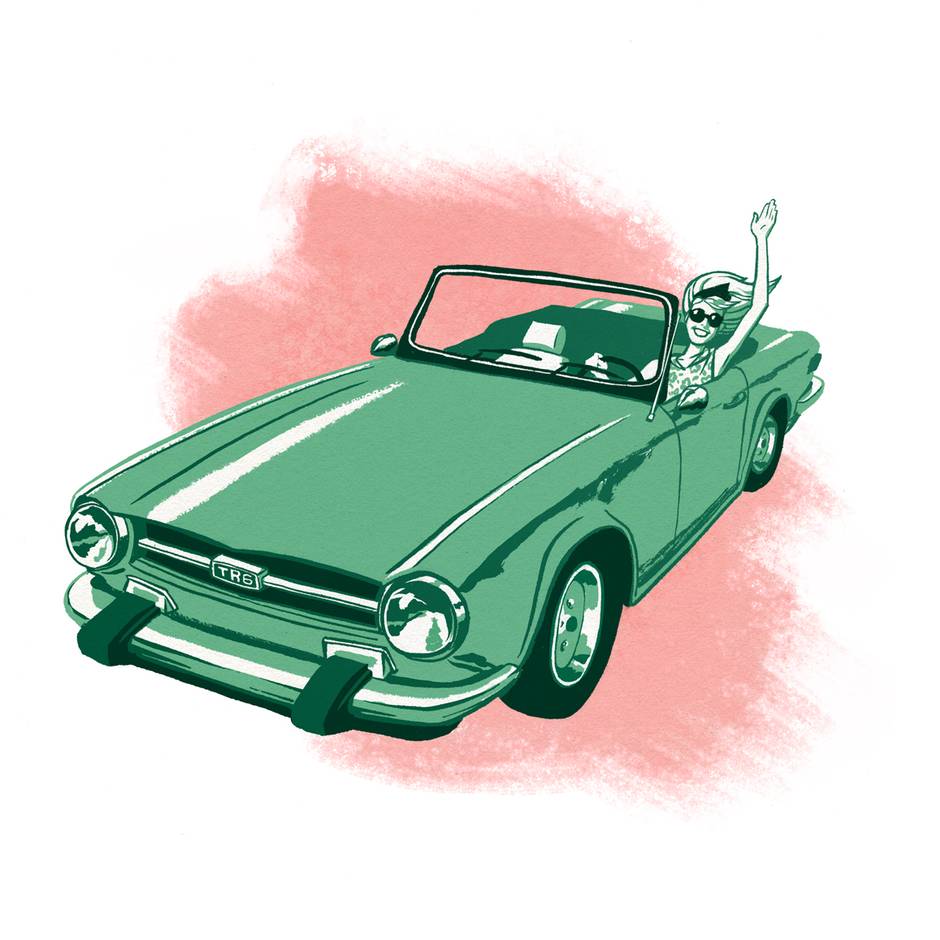 But alas, the TR6 was not the first car I purchased – it would hardly have endured a Sudbury winter. Instead, when the Honda Civic was introduced to Canada, I became one of its first buyers. The Civic ably got me to university and came with me to my first teaching job in Manitoba.

Marriage and babies saw us move on to a Crown Victoria station wagon and an Astro van, but my dream of a TR6 was still there in the background. Ask my children: When they were little they were assigned the duty of buying me a TR6 once they grew up and had jobs. Hardly likely, but one could hope …

Turning 50 changed things, though. Hubby and I were well established in our careers, the children doing well in school. I began perusing the car section of the Winnipeg papers. One Saturday morning it was there – a 1974 TR6 in need of repair, but for sale. After 25 years of hearing about this car, hubby was game to explore, so off we went to have a look.

Unfortunately, neither of us knew what questions to ask or what to expect. We watched in anticipation as the seller removed the tarp. I held my breath. Could this possibly be it? Would my dream be finally realized?

But me? I saw my baby. I imagined it Jaguar green with new black leather seats, the roof down, my hair blowing in the breeze, cruising down the highway. I had to have it.

Needless to say, the wreck/reclaim/dream comes with a cost. One caution I give to you, ladies: You may need the fortune of an oil baron to refurbish and reclaim a TR6. According to our British-specialist mechanic, you can’t just go to Canadian Tire to pick up parts. Nooooo, you need to spend an enormous amount on parts that are both obscure and unpronounceable. Apparently, Triumphs’ electrical systems are notorious. Ours needed three days of labour time just to get the turn signals working. Did I need Pirelli tires? The mechanic felt I must have the best.

It took only three months for the mechanic to get the TR6 through a safety test and I was finally able to take it out for a drive.

The first day of cruising my baby down the highway was life-changing, both in my joy and in having my dream fulfilled. So what if the torn leather seats were uncomfortable, the body still in primer and it couldn’t go out in the rain as the top didn’t work? The glow was still there.

The restoration continued. Finally, after five years of continuous work, the car was in peak form. Throughout those five years, the male attention toward me never wavered. Wherever I drove, wherever I parked, I would be approached and asked about my car.

Now, it’s one thing to draw all this male attention for a first look. It’s another thing if you’d like to keep it. Apparently, you need to know what is under the hood. You have to be prepared to throw out words such as carbs (not the food kind), know the engine model, etc. Limited knowledge may lead to a drop-off in male interest.

While restoring the car, we were also making the decision to move from Manitoba to Prince Edward County, Ont. The test was on, for sure. Would the car remain the man magnet it was in Winnipeg? The car mover delivered the TR6 safely to Kingston. Driving home to Wellington, west along the Loyalist Highway, I noticed the looks and waves beginning. I got a callout or two as I drove through Picton and Bloomfield. Yes, the magic was still alive!

This longer Ontario warm season allows for a longer TR6 driving season. We go exploring to little towns in the area and north of Highway 401. The joy of driving my little car is all I hoped it would be as a teenager. The extra male attention was unexpected back then. But now, as a young twentysomething stops me in Belleville to say he has four ’74s (while he covetously admires mine) I am no longer surprised. The magic continues.