My doorbell rings at 11 a.m. On the step, I find an elderly Chinese lady; she is small and slight, and she’s holding the hand of a little boy. In her other hand, she holds a paper carrier bag. The boy shrinks back as my yellow Labrador tries enthusiastically to greet him.

I know this lady. It is by no means her first visit. She is the little boy’s grandmother, and her daughter bought the house next door last October. It is one of several large, heritage-style houses that have replaced smaller, older homes in my block over the past couple of years – part of the madness that has gripped the Vancouver housing market.

At first, the house seemed to tower over my small, yellow, 1920s bungalow, but I have become used to it over the two or three years since it was built.

My visitor’s daughter, Nicole (who speaks fluent English), is currently in Shanghai, but her parents are in the house for the summer with the little boy. Nicole has apparently told her mother that I am having heart surgery shortly, and the result is that her mother has decided I need to be supplied with meals.

I know what is inside the paper carrier bag – a Thermos with hot soup and a stainless-steel container with a meal of rice, vegetables and either chicken, meat or shrimp, sometimes with a kind of pancake. This has become an almost-daily occurrence. It is the ultimate home-delivery service.

Communication between my benefactor and me is somewhat handicapped by the fact that she doesn’t speak English and all I can say in Mandarin is hello. Once, she brought an iPad as well as the food. She pointed to the screen, which displayed a message from her daughter telling me that her mother wanted to know if the food was all right and was anxious to know that it wasn’t too salty for me. I am not used to iPads and was unable to find the keypad, so the lady indicated I should go with her to her house. Once there, she handed the iPad to her husband and almost immediately I found myself looking at Nicole in Shanghai and discussing her mother’s cooking and the fact I have to be careful about my salt intake.

“Your mother just can’t be bringing me meals like this all the time,” I protested. “I can hardly reciprocate by cooking something from my native land, like roast beef and Yorkshire pudding.”

“Oh, no,” Nicole said. “She doesn’t like Western food. Don’t worry about it; she has to cook for the three of them anyway, and she wants to do it.”

“Can you at least tell me her name?” I asked.

Nicole replied that I would never be able to pronounce her mother’s first name, so it would be fine to use her surname. I’ll call her Wing for the purposes of this tale. 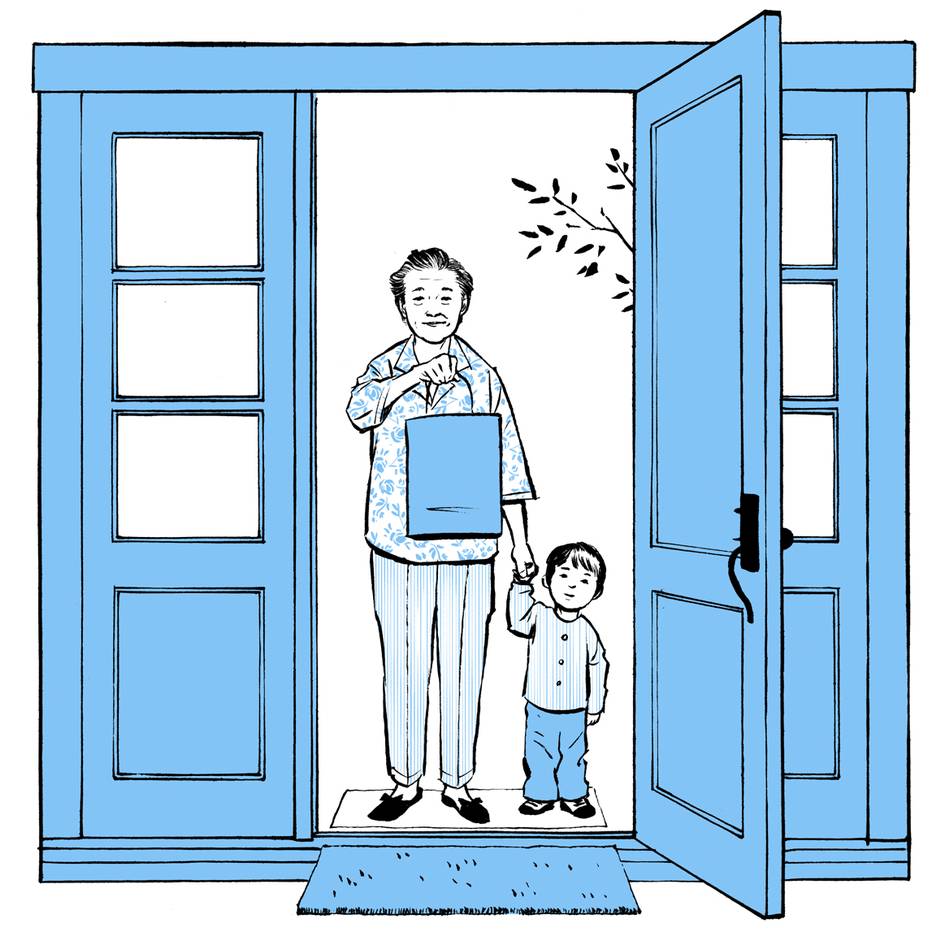 Jori Bolton for the Globe and Mail

At first, I would wash and return the empty containers next door, but Wing was obviously concerned to find me at her front door. I think she believes I am too fragile to be making this effort, so despite my attempts to dispel this notion, she insisted on holding me firmly by the arm and escorting me right to my own front door. I was quite concerned about this because I tend to tower over her, and if I were to fall I think I would bring her down with me.

Wing has now had her daughter tell me by e-mail that I should leave the empty dishes on the arm of my wooden lawn chair on the front porch. Wing tried originally to suggest this to me with the help of gestures, but I was unable to understand.

Once, I delayed returning the containers, but even without the Thermos Wing was undaunted and arrived at my door moving slowly and carefully carrying an open bowl of hot soup. Another morning, when the doorbell rang, I grabbed Wing’s dishes from the kitchen counter and found myself in the process of offering them to a rather puzzled delivery man from Greyhound Canada.

Recently, one of my grandchildren kicked a ball around with the small grandson (who is 3) in our front yard, while the grandmothers looked on and gave the ball a little kick whenever it came our way. He does not speak English either, but judging by the smile that played around the corners of his mouth, he enjoyed the game.

The tenant in my basement suite is a university student who apparently speaks Mandarin quite well, so with her help and that of a friend of Nicole, I have found out that Wing is 68 – 13 years younger than I am – and that she lived through the Cultural Revolution, forced to work in the fields instead of going to university. For my part, I was raised in wartime Britain.

So here we are, two grandmothers a world away from where we were raised, neither of us able to speak the other’s language but communicating one way or another (with some help from technology). The doorbell keeps ringing and there is the familiar brown paper carrier bag, handed smilingly to me by Wing.

I was able to have translated to her my comment that there is no way I can allow her to go back to China next month. She seemed very amused. I am working on some more Mandarin words – it’s the least I can do after such a display of kindness.

“Thank you” is, of course, the first one. Somehow, it seems inadequate.