Last fall, I gave birth to an eight-pound (3.6 kilograms) baby boy on a futon in my dining room. It was a planned home birth attended by two midwives, a student-midwife, a doula, a husband and, for part of the time, a puppy.

My labour was quick and not at all painless, but the part I will remember most is the sense of calm in the room throughout the delivery and the feeling that I was in control of the process. Unfortunately, the same cannot be said of my pregnancy, most of which I spent having a crisis of conscience.

I knew that my parents and in-laws were strongly opposed to home birth, and my husband and I, not wanting to deal with their disapproving comments for nine months, had decided to keep our plans a secret. This proved to be more challenging than it sounds – once that baby bump showed up, people were more curious about our birth plan than we ever could have imagined.

Even though my son is healthy and happy, my family is still upset about how we chose to bring him into the world.

When I talk about the day my son was born, my parents make the point that one is never in control of the birthing process because things can go horribly wrong at any moment. But the subtext is that anyone who chooses to have a home birth is selfish and needlessly putting her baby at risk.

Nearly everyone in my family falls into this camp. My father feels particularly strongly, and takes every opportunity to admonish me. He insists that only luck prevented anything from going wrong at my son's birth. It stings a little to hear this.

Even though home birth is becoming commonplace in many parts of Canada, it still has a stigma attached. A lot of people assume that it involves a séance, and maybe some incense, or they think that it's an anti-establishment act that only women who don't shave their legs would consider.

I can assure you that neither of these things was true for me – I just wanted to be at home, where I could have privacy, and where I wouldn't feel like I was a sick person, which tends to happen in hospitals.

Before I decided whether to go with a doctor or a midwife, I had a visit with each. In hindsight, the visit with the obstetrician may have been one of the things that started me on the path to having a home birth. The doctor treated me exactly like a sick person even though she had no clinical suspicion that something was wrong. That didn't stop her from listing off things that could go wrong (apparently that's everything when you're over 35).

Just being in the obstetrician's office made me anxious – lots of posters warning women about heart disease and cervical cancer. It made it hard to feel excited about my pregnancy.

At the time, I attributed my decision to go with a midwife to "vibes," but maybe a better explanation is that I couldn't help but feel joyful in the waiting room at my midwife's clinic because it was plastered with pictures of sweet little newborns. Not that I overcame my anxiety entirely.

It might sound trivial (it certainly did to my mother – "Get over yourself, Lisa!"), but one of my greatest fears about delivering the baby was being naked in front of strangers, particularly when I imagined doing it supine under fluorescent lights.

My midwife, bless her, is the only person who listened to me talk about this fear and took me seriously. She never suggested home birth, but she provided lots of information and supported me in making my own decision. I trusted her implicitly, which helped me relax somewhat and probably tipped the balance in favour of a home birth.

However, she was not able to put my conscience at ease about keeping the whole thing a secret from my family. Perhaps my guilt came not just from keeping it a secret, but from the worry that in choosing a home birth I was indeed being selfish, putting my own needs ahead of the baby's.

But the part of me that won out knew that everything in life is a bit of a gamble, and things can go wrong in hospitals, too – unnecessary interventions, drug-resistant bacterial infections, to say nothing of bossy nurses.

So, as my due date approached, every visit from our families became increasingly like an episode of Fawlty Towers. My husband would run around trying to hide the fully inflated birthing pool; we would create distractions to prevent our mothers from opening the fridge and seeing our "in case of hemorrhage" emergency drugs.

I can laugh about it now, but at the time it was pretty stressful. It was especially hard to keep a secret of this nature from my mother.

If my husband and I are lucky enough to have another baby, I am not sure I would deliver at home again, mostly because I wouldn't want to disrupt my little guy's life too much. He will probably be put out enough when he's supplanted as boss of the family, so I wouldn't want to kick him out of the house while I deliver his new rival. And I am not too keen on having him there during the birth.

But beyond that, part of me doesn't want to go against my parents again. There are already enough things to worry about during pregnancy and childbirth; having your parents think you are irresponsible needn't be one of them.

Facts & Arguments
Should I have stopped the man who snatched chocolate from the store?
May 11, 2018 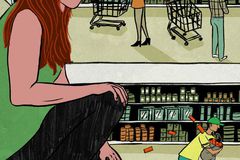 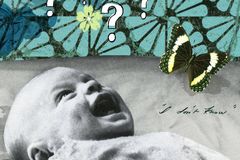