Three years ago at about 6:45 in the morning on a day like today – sunny, hot and not a cloud in the sky – I was lying in bed when I could have sworn something passed by my second-floor, south-facing windows. Hauling myself out of bed, stepping through the French doors and onto the porch, I saw a lumberyard delivery vehicle with a large boom parked at an angle across a corner of the grass boulevard in front of my house. Just then, grasping another load of plywood, the boom arced past my window on its way to depositing a load of plywood at the front of the house under construction next door.

It is a short city block that I live on. Over the past few years it’s been a veritable hive of construction. The house next door was demolished and slowly reconstructed; the old farmhouse on a double lot down the street met its Waterloo, and two new houses took shape in its place; and the “grow-op” house – as we called it because of its reclusive, shuttered-in presentation – was rebuilt from the studs out.

As if hooked by the steady stream of dump trucks and cement mixers, the school down the street expanded and, not to be left behind, the hospital two blocks to the south then sprouted huge cranes and rang with the sounds of pile drivers. One day, a great yellow dinosaur appeared and devoured the large, non-descript house on the corner at the back of my house. After standing firmly on the corner for 60 years, quietly serving its purpose, it was unceremoniously carted off to the landfill over two days.

The signs are all there, and the daily din unrelenting. Trucks. Power saws. Electric hammers. More and more For Sale signs are appearing in the neighbourhood. A gaping hole awaits a new townhouse complex, foreshadowing the days to come. All of this activity is magnetized by the sleek Skytrain pulsing back and forth nearby in its subterranean world.

It isn’t much, our little in-town neighbourhood cuffed by the G. F. Strong Rehabilitation Centre and the King Edward Mall on one end, a care facility on another side and centred on a park just big enough for a soccer pitch and a baseball diamond. In Phase 3, as the City of Vancouver refers to it, our neighbourhood shows up as shades of grey on the planners’ map. It’s an odd conglomeration of homes and people; not worth preserving, I suppose. Shades of grey are a licence to “redevelop,” as the letter I hold in my hands illustrates. 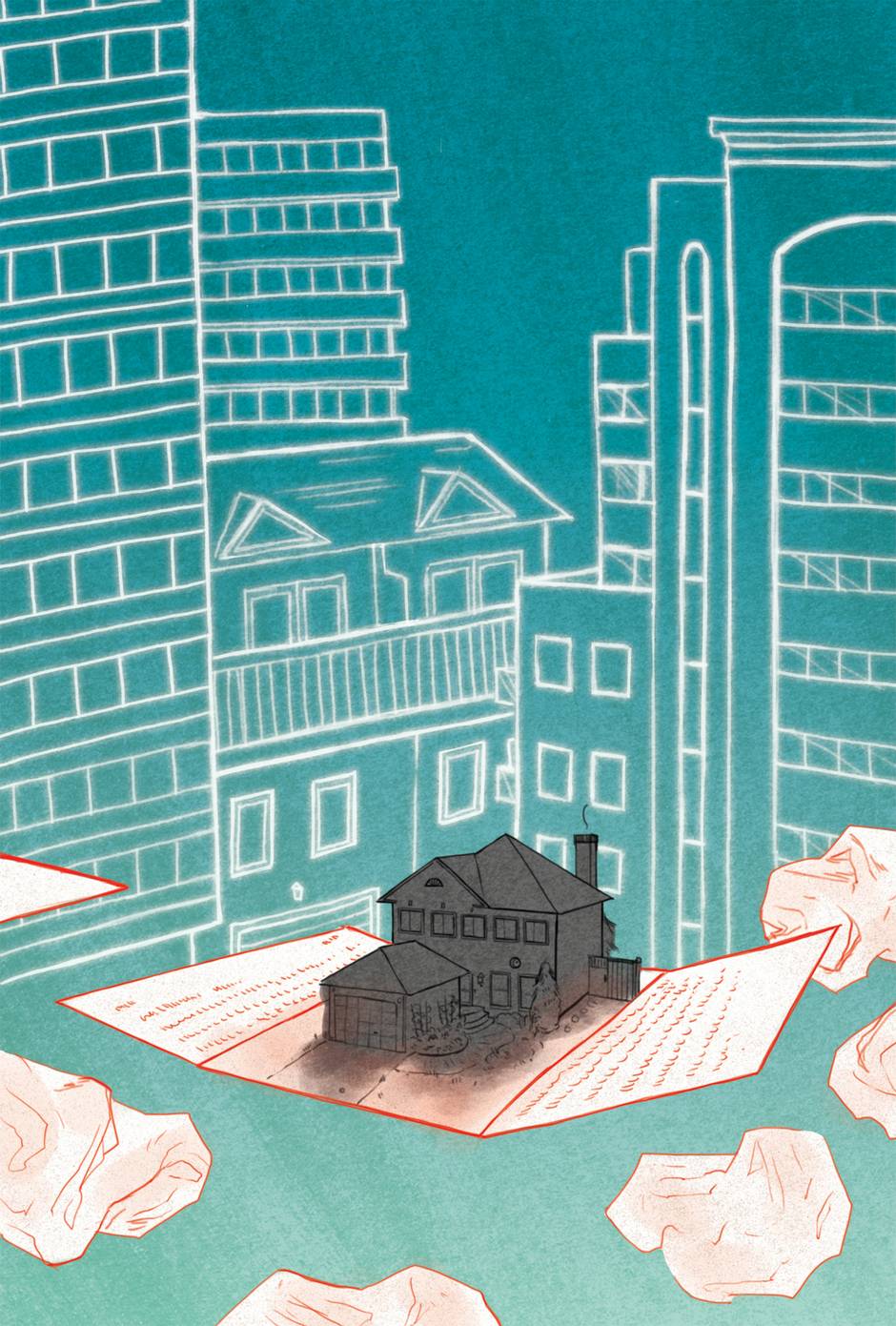 Taryn Gee for the Globe and Mail

When I recover from the outrage I feel in response to this letter, a kind of sadness descends; a sort of inevitability. Yes, we will likely fend off this offensive for now, but it will be unrelenting. Further proposals will follow; by twos and threes properties will be assembled, houses demolished and townhouses and condominiums built.

Eventually, everyone in this little oasis of a neighbourhood, perhaps with an exception or two, will succumb, driven out by endless construction, lured by escalating prices. The City will serve as the developers’ handmaiden, fixing up the sewers for an increasing population, repairing the roads and alleys to bear the heavy traffic of construction vehicles, holding innumerable consultation sessions, providing a few new amenities. Maybe some will benefit from all of this. Maybe someday a new kind of quiet will be established, and a new form of beauty appear, but it will not be for at least a decade.

I am under no illusion that this account will stop all of this, bring back the stream that once flowed through my property, save this old house that I have come to love, the garden I have shaped with my hands: this funny little oasis. But I am writing it to say that I saw it, witnessed it, felt sadness about it and concluded that, in the end, it is folly.

At the front door in the dark at 10 p.m., the neighbour from two doors down tells me I have left my garage door open. Having no grandparents in town for their five children, our neighbours on the other side borrow us for an event at their children’s school. Passing by on her bicycle, she tells me that my garden is growing beautifully; my onions better than hers, but on the other hand she has eggplants.

At a time when loneliness and disconnection are cited by citizens of our metropolis as a major downside of Vancouver life, these moments confer a gentle sense of meaning and an atmosphere of safety and support. Shouldn’t we evolve it to its future rather than wipe it out?