The spa was alluring, with its picture window decorated in pink sashes and tulle. A facial would be a perfect escape from my much less than perfect reality. I’d take a break from this soul-sucking unemployment thing, I thought, and pamper myself.

I entered the sparkling reception area. There, I was given a friendly nod by the owner, a well-coiffed middle-aged woman who continued her conversation with another customer. I waited, listening to the two women chatter in Greek. They sounded happy.

I felt a flash of jealousy. Unemployment was so lonely.

I stood, feeling sorry for myself, and when a willowy aesthetician appeared, I didn’t notice her. The young woman repeated her soft greeting for maybe the third time, introducing herself as Maria. I gave a nervous start and apologized. She smiled, showing gleaming teeth, and led me through a beaded archway to a darkened room.

As I settled myself on the recliner, Maria cast a frilly cape over me and started to lay out tools for probing my neglected epidermis. She gestured to her certificate on the wall and told me she took the tending of skin very seriously. It was her life’s mission.

She was being pleasant and professional. Why, then, did I feel a wave of sadness?

My facial began. During the skin massage, I squirmed when I should have relaxed, and grimaced when I should have maintained a neutral Mona Lisa smile. My aesthetician tut-tutted and persevered. She smeared on one lotion after another, following each spackling with a prolonged massage. Finally, she applied a tingling masque to my face.

Maria dimmed the light and left me reclining regally on the lounger for what she said would be 10 minutes of blissful relaxation. If only. A radio blared tinny dance music in a distant room, the women in the reception area chatted chirpily and heavy footsteps from the apartment above completed the distracting soundscape.

Two minutes, and eight to go. I’d been told to keep my eyes closed, but claustrophobia set in. I peeked. On the wall in front of me, I saw a poster of a radiant Marilyn Monroe. On another wall, a Greek Madonna and child simpered at each other. If outer beauty couldn’t be achieved, maybe I could aspire to inner saintliness. 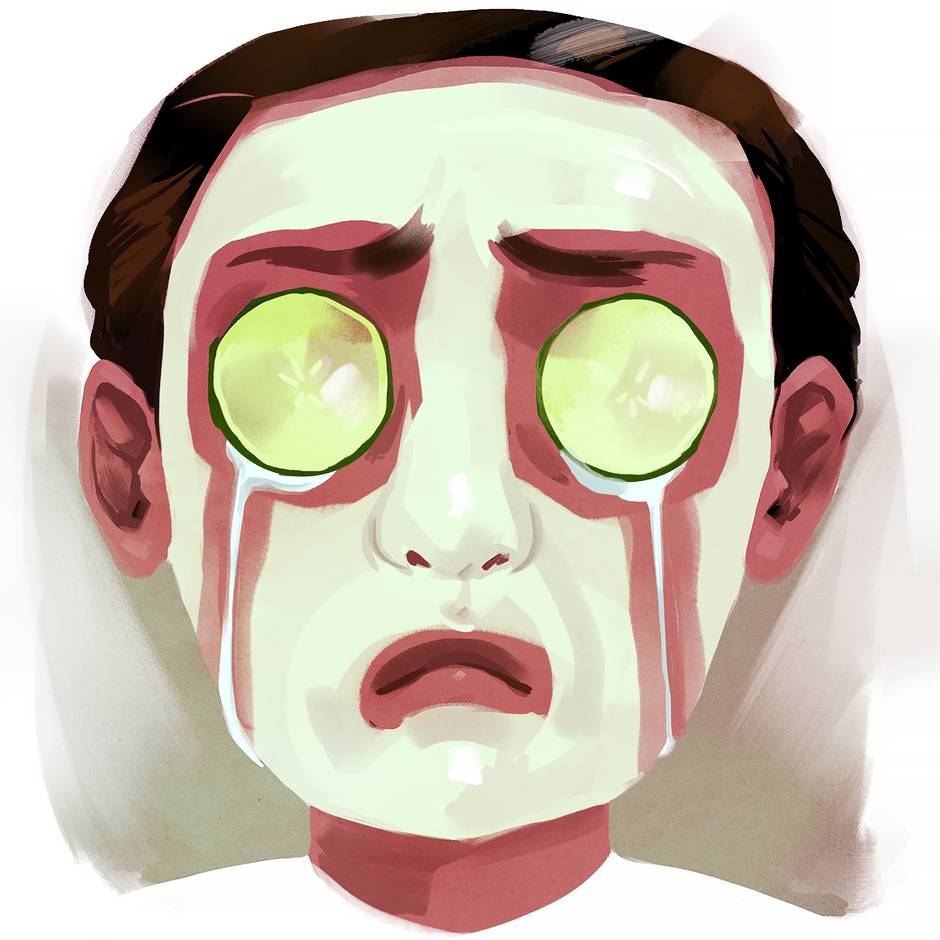 I closed my eyes again and attempted to remain still. I reflected on life, thought about future goals, tried to be positive. Tried like crazy. And failed.

Tears, hot under my lids, began to flow. They carved canyons along my daubed cheeks. Their volume increased, decimating the painstaking labour of my college-trained technician. I knew I didn’t need to work on my outer layer. My hurt went so much deeper. I cried out my shame, my rage, my fear, and I didn’t stop.

When 10 minutes were up. Maria returned. She turned on the light, took a horrified look at me and ran to get the proprietor. Together, they fussed over me. Had they done anything to cause this most unusual unhappiness? How could they help? Would I like additional services? On the house.

No, I wanted to leave. I needed to be outside, away from this scented room. I craved freedom and fresh air. While I still wasn’t sure what would make me feel better, I knew that spa treatments weren’t the answer. Feeling guilty, I tipped Maria too much. I hadn’t meant to be a problem customer. Add this experience to all my other failures, I thought.

On the sidewalk, I took a deep breath and looked at the sky. It was ominous, with thick, scurrying clouds. As I began my walk home, lightning forked a snake’s tongue of flame. Two heartbeats later, thunder boomed. Erratic raindrops struck the sidewalk, hissing as they touched hot cement. I picked up my pace. Better to face the full force of the storm than retrace my steps. I was never returning to that spa.

In front of me, the sky still showed blue patches, but a glance over my shoulder told me I wouldn’t escape the coming deluge. I raised my miniature umbrella as a peace offering to the angry weather gods.

Rain began to beat down, not in isolated spits and spats, but in whole sheets of water, slicing diagonally to the pavement, bouncing back up at me, biting into my legs and soaking my clothes. The umbrella, frivolous trifle that it was, couldn’t ward off the downpour, and soon flipped inside out in surrender. I tossed it in a bin and ran, water streaming down my massaged face, as lightning arced all around me.

Full strength, the storm lasted five minutes. Five terrifying, beautiful minutes of incalculable power. Gradually, the sheets of rain transformed into individual bullet-like spatters, then to gentler summer shower drops, and finally to a shimmering mist of fine spray. As precipitously as the storm had begun, it passed. The sun broke out in a golden cadenza of glory. A timid rainbow appeared, for the briefest of pastel moments, and was gone.

On the glistening sidewalk, I started to laugh. Soaked to the skin, rain-whipped and bedraggled, I laughed at my situation, my appearance, and my petty self-preoccupation. I had emerged from the storm, energized and unscathed. Screw this unemployment thing. It couldn’t hurt me. I would survive.