Skip to main content
Sally Basmajian
Contributed to The Globe and Mail
Published May 19, 2016

When I was 7, I stuck a lit sparkler in my big sister’s back. I wanted to see if it would hurt.

I could tell from Nancy’s piercing shriek that it must have done a lot more than just tingle. The dance of agony she performed was further evidence that a burning sparkler’s tip plus contact with skin equalled pain. Eureka! Now I knew.

But as I watched her continue to hop and howl on that Victoria Day evening, I began to think she was hamming it up. She was the middle child, sandwiched in birth order after our best-beloved older brother and before me, the scene-stealing afterthought of the family. She rarely got her due share of parental attention. With one sizzle of a sparkler, I had given her carte blanche to grab the limelight.

And it wasn’t only in front of our close relatives – there were also many neighbourhood kids capering about, twirling their sparklers and lighting up the sky with what looked like hundreds of drunken fireflies getting jiggy at a hoedown. The kids paused when they heard Nancy scream; the fireflies ceased their revels.

When my mother came rocketing over to see what was amiss, Nancy stopped gibbering, made a dramatic j’accuse finger-stabbing gesture in my direction and began to form coherent words. Harsh ones. Allegations, directed at me, totally disregarding my pure motives as a pint-sized scientist. Because, really, I had been on a quest for enlightenment. I hadn’t been goofing around or acting out a homicidal fantasy; I’d been trying to broaden my knowledge.

Now that the results were in, and solely due to my efforts, thank you very much, all the kids had learned a valuable lesson. Perhaps they should have expressed gratitude, but none of that crowd made a move to do so. They milled around Nancy and made comforting noises, like prepubescent angels cooing a healing serenade, and ignored me completely.

On the sidelines, shaking my head over the obliviousness of these science-haters, I reviewed the data. From my experiment I had ascertained that, unlike a sparkler’s foaming, lightning bits, through which I could run my hand without feeling more than prickly, static zaps, the hot metal endpoint was dangerous. I would be careful forever more not to burn myself with it. Oh, and I’d try not to hurt others, too.

As I mulled this over, my mom, who had been a nurse before being blessed with her three interesting children, took charge of the situation. Yanking up the back of my sister’s favourite shirt, which was still emitting wisps of smoke, she checked Nancy’s back thoroughly and determined that the damage was not hospital-worthy. 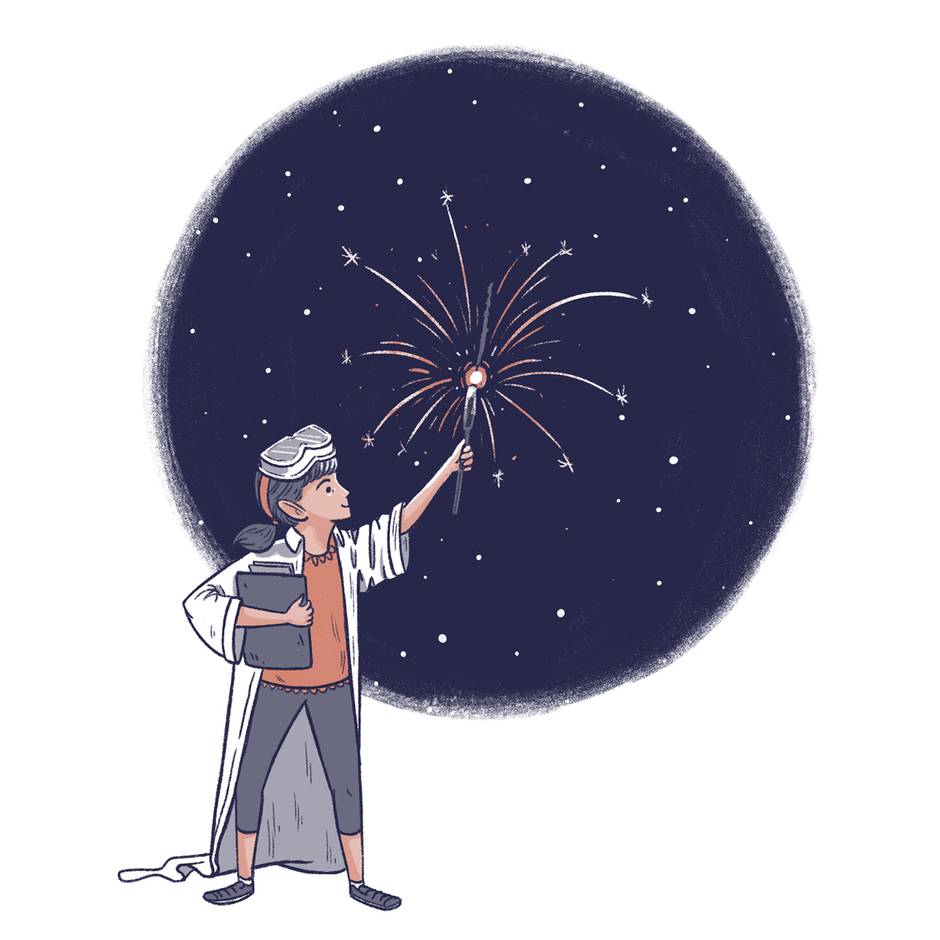 Hugs and there-there’s duly administered to a still-whimpering Nancy, my mother turned to me. At last it was my turn for attention. Not that I was needy; it was my God-given right as the baby of the family to get more than my quota, and I didn’t have to cry to get noticed. Like some people.

Yet, did I see in my mother’s eyes the pride of a parent who recognized genius in her youngest child? No. By the fading light of my sputtering sparkler, I noted unmitigated wrath in Mom’s normally cool blue eyes. A grievous punishment was coming.

Being the baby of the family had its advantages. I had ethereal, light brown curls that gave me a cherubic look, and a slight speech impediment that I knew was cute and that I could turn on at will. It would have been fine if my dad had been close by – my charms never failed on him. Alas, he was nowhere in sight.

Mom trapped me in the nook between the porch and the back wall of the house and fired questions at me. What had I been thinking? Why would I ever do such a thing? How could I have been so careless? Of course I would never have done this on purpose – would I?

My sister stood to one side, smugly tapping an imperious toe on the patio. She couldn’t wait for me to be chastised to the utmost.

I raised my chin and gathered my thoughts. I almost went with Plan A: tell the unvarnished truth about my desire for knowledge. Yes, I had hurt Nancy, but I hadn’t known that I would. I was a budding scientist in search of the truth. But now that Mom had vented her anger, I saw only love and trust in her eyes. She had faith in me. I was the innocent, entertaining baby of the family. I couldn’t possibly be a psychopath in the making. So I went with Plan B: I burst into tears and said it had been a horrible accident. I hadn’t been paying attention when I ran smack into Nancy with my sparkler. I’d been careless and I was so, so sorry.

Taking this route was wise. Mom hugged me until I stopped crying. Apparently convinced by my waterworks display, Nancy forgave me, too. We fired up new sparklers and ran around in the moonlight with the other kids again.

You can’t bury the truth forever, though. Forty years later, the topic came up over a family reunion dinner. Nancy asked me if I’d hurt her deliberately that Victoria Day many years ago, and I confessed. We laughed, but I know that my sister, who will always bear a crater-like scar, was aghast. Mom was more philosophical. Perhaps she’d always suspected. After all, she was the youngest in her family, too.