Because I take pains to stay cool, I told myself that being on maternity leave was like one of those art performance projects where you spend time doing something out of the ordinary, day by day, for many consecutive hours or days.

For example, the artist Tehching Hsieh lived in a wooden cage for a year. Just recently, Marina Abramovic sat for more than 730 hours in a chair at the Museum of Modern Art in New York, with visitors encouraged to sit across from her, in a piece called The Artist Is Present. My piece could be titled A Solitary Year With a Stroller.

I became a mom in June, 2009. I also became the proud owner of a 19-pound, full-service stroller.

I first ventured into the world with the stroller five days after a brutal labour and emergency cesarean section. I almost fainted in the drugstore when the after-effects of my medical procedure caught up with me 40 minutes into my adventure.

The baby was screaming, people were commenting on his tiny size ("Yeah, he's only five days old," I managed to choke out), my stitches were hurting and my breasts were killing me. I panicked trying to figure out what to do so I wouldn't alarm everyone around me and wind up the subject of an intervention. I considered breastfeeding right there on the floor of the store. Or maybe the baby wasn't hungry, maybe he was wet?

The crowd was growing more and more curious. With the last of my remaining energy and reason, I stumbled out, walked around the corner to a side street and stopped to breastfeed on top of a pile of wooden crates. I changed him. Then I rested. I walked home. Very, very slowly.

Phew, that was scary. But at least I stayed cool. And so self-sufficient!

Over the next 12 months I experienced all kinds of novel - albeit less drastic - situations with baby and stroller in tow. Despite being dead tired, I performed for people, trying to make it look easier than it was. I don't know why I didn't want to admit that this was quite challenging, that this was not an art project, and that I needed help.

As a solo stroller artist, I escaped crowds, entertained them, joined them and taught my son to notice and react to the attention. We were an act. Around us, dozens of similar acts walked around in the daytime: women with bleary eyes and screaming or sleeping cargo in their carriages.

I discovered that being a new parent means learning to adapt your body to the world in new ways. This is years into adulthood, when you thought you had everything figured out. Whatever you knew of walking or sitting or standing no longer applies. Now you have to add the most precious of all bundles to your routines. Now you're a machine of handling, avoiding, balancing.

I developed special city-mom muscles that come with carrying a stroller down and up the stairs of subway stations by myself. Mom biceps and mom hamstrings. In my mind I called these parts of my performance momballet.

Getting onto buses or streetcars, I learned how to tip the stroller exactly so its front wheels would land on the first step while I manoeuvred the back wheels below. I became an escalator acrobat, holding the stroller handles, front wheels up in the air, child sunk deeply and happily like a loaf of warm, heavy bread inside his protective pouch. I never asked for help and it was rarely offered. I'm sure I turned people off with my confident momballet act.

Near the end of my year-long performance I finally met my challenge. I was taking the train from Montreal to Toronto. I had been on the train many times before, alone, with my stroller and I understood the aspects of accommodating our troupe, so to make things easier I bought a first-class return ticket.

I showed up early, got my ticket stamped before boarding and was ushered onto the train. It turned out the attendant couldn't park the stroller onboard because of something or other. There was lots of room, but there were also lots of mysterious rules.

I made a swift decision. I collapsed back into my seat with the baby squirming and unaware that I had just given up on his ride. I had no solutions other than keeping the thing in my lap along with the baby, so that was that. I didn't ask for help and it wasn't offered either.

We arrived home okay and the stroller magically made it back with us, although I have no idea where they put it. I loaded junior back into it and off we went. We were back in our act. However, the next time I took public transit I stopped a teenager and asked him to help me carry my load.

Today I'm no longer a solo performer. I engage everyone in helping me with the stroller. I learned something valuable: In my world it takes a city to raise a child. This is no performance piece. This is life. And I don't have to do it all alone.

Facts & Arguments
Gymnastics class is a good way to scare yourself
July 13, 2010 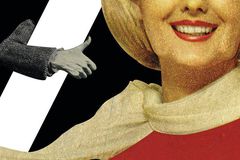