It’s 7 p.m. on the first Tuesday of the month. I sit at the bar and nurse a glass of wine. The guy on the adjacent bar stool is clearly a fixture – he’s red-eyed, grizzled, and he watches me warily. I sense that I’m invading his space, that he’s accustomed to beer-drinking buddies, and not a recently-retired middle-aged woman. I don’t tell him that I’m completely out of my comfort zone.

But he’s listening, too. Intently.

The voice of the “poet” on stage pours out of the loudspeaker above the bar and mutes the conversations of the bar-stool regulars. A guy wearing a fishing hat reads a story-poem about the Thomasburg spring and a fishing trip: The piece juxtaposes urban inexperience with redneck know-how. It’s funny. There is something odd and mesmerizing about this – the audience at the end of the room sits motionless, their profiles vaguely evident in the dim light. The storyteller confesses he’s never done anything like this before. For some reason, I am hooked.

It’s like walking backward into another world, both physically and metaphysically: “Poetry Night at the Tweedsmuir Tavern.” This is an oxymoron – and not. The concept is the brainchild of two white-haired guys, who emcee and photograph the event. But the number of local poets and wordsmiths who practise their craft on a tiny stage lit by fluorescent bulbs is quite amazing. We are moths. What draws us to this light?

But first, some background. The Tweedsmuir Tavern is the local watering hole in the village of Tweed, Ont., halfway between Toronto and Ottawa. Often, when I tell someone I’m from Tweed, they nod in affirmation because they’ve driven through. It’s a pretty town that sits on the edge of Stoco Lake, and the highway that slices through it connects the 401 to Highway 7. Tweed’s notoriety also hails from a murder/serial abduction case a few years ago, and a reported sighting of Elvis that has morphed into a summer festival. Imagine quaint Victorian brick storefronts, and a Tim Hortons at the north end. But I digress.

Twice, the poets mention Al Purdy. Years ago, I spent a day with Purdy, and he invited me to his home on Roblin Lake for a beer. I never went and I’ve regretted this over the years. So when the poets speak of their reverence for Purdy and his influence on their writing, I am impressed. 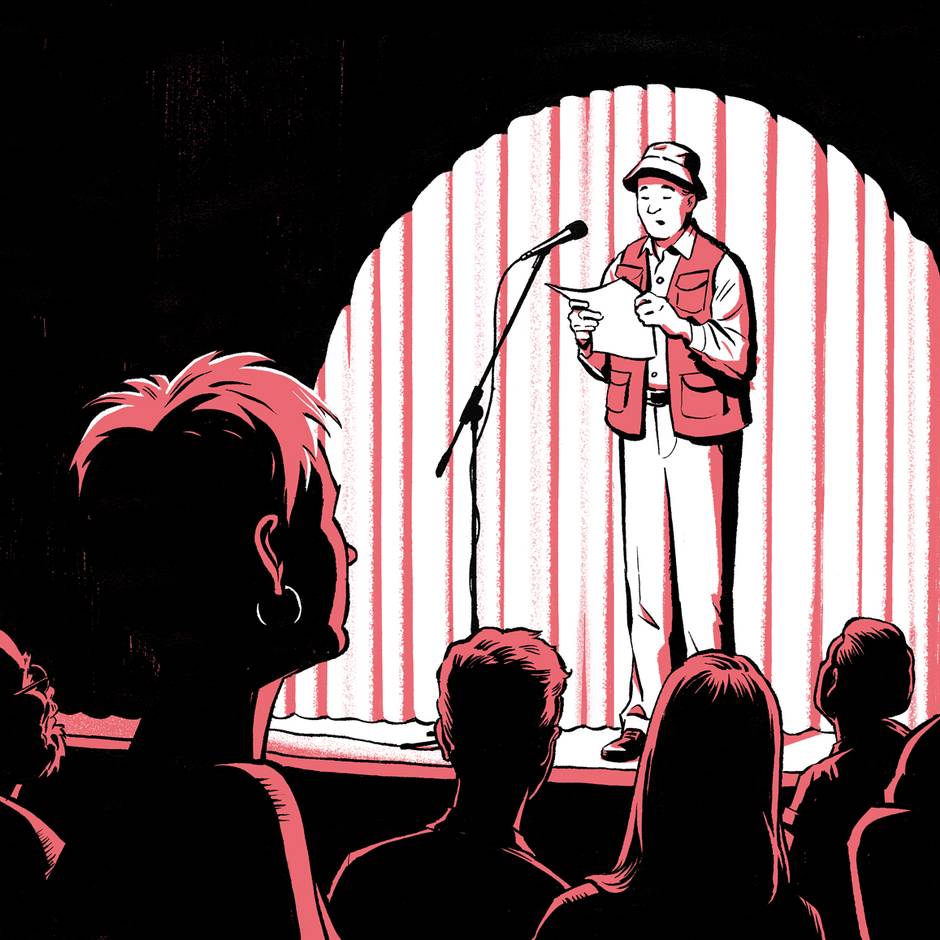 In fact, Purdy would have loved this place. There’s the weathered bar at the rear of the room, faded posters and signs, a TV screen, lots of yellowed wood. The place feels used, familiar. The room is low-ceilinged, claustrophobic. The lighting is murky; the black-and-white checkerboard floor adorned haphazardly with heavy wooden chairs and tables. Two pool tables are turquoise in the yellow light, and an orange neon exit sign illuminates the front door. A faded Blue Light sign adds further ambience. The pillars are covered in mirrors – when I sit closer to the stage, I can see the people at the bar reflected in them. I imagine myself inside Manet’s A Bar at the Folies-Bergère. Taverns hold so much sadness.

And yes, this is a place that has held its share of grief and inebriation, of camaraderie and celebration. It’s a place that has witnessed the effects of alcohol on the human psyche. It understands hope and grief, passion and despair.

But mostly what I notice as I sit at the back of the crowd of maybe 50 or 60 people is that many poems are prefaced by a comment about what it feels like to have an innate desire to capture something significant about life. With words. I’m truly surprised at how many of these “poets” there are. The show is more than two hours long.

At home, I have boxes of poems – mostly bad. I’ve been a scribbler since I was a teenager. When I flip through the notebooks, I discover a pattern – most of my poems are about moments in my life when I experienced intense emotions, love and loss being central motifs. I’m not sure if I’ll add my name to the list of readers and reciters any time soon because it takes courage – or complete stupidity – to read out private, emotional stuff to anonymous adults.

Still, I’m drawn to Poetry Night at the local bar like a moth to light, because like those people who have shared their work onstage, I, too, savour words and their ability to voice who and what we are. It’s the power of poetry that has pulled this group together, that makes the rough-hewn atmosphere of the Tweedsmuir Tavern a poetic paradise.

Poetry Night at the local bar really is “what the poets are doing.” I admire their courage. First Tuesday Muse, it’s called, and there are several more evenings planned. Maybe I will practise walking backward. In fact, I think I’ll get serious about reconnecting with my own lost muse.

“Courage, it couldn’t come at a worse time.”